After three-and-a-half seasons of unprecedented success, the shades of the Mustangs' bootless past appear all but forgotten

As quarterback Matt Brennan's last-ditch pitch into field goal range sailed over the outstretched palms of Tredale Tolver and into the lap of a South Dakota State defender, Kyle Shotwell stood flabbergasted on the sidelines. 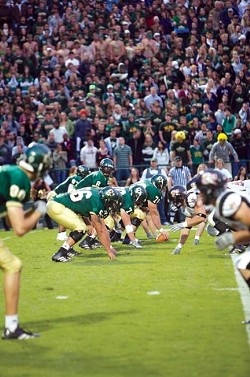 # The senior middle linebacker who anchored a solid defensive effort for three quarters and snatched up a game-turning fumble in the second quarter listened helplessly to the ecstatic yells of every visiting Jackrabbit, which rang out with perfect clarity in the hushed stadium.

South Dakota State took a knee on the following down, icing the Oct. 1 comeback that saw a 22-point deficit wiped out in one quarter of play. SDSU slinger Andy Kardoes and receiver JaRon Harris connected for touchdowns three times in that 15 minutes. A bold gamble on a two-point conversion made the difference in the 28-29 upset loss.

So there it was. On homecoming night, facing an unranked opponent, the No. 4 Cal Poly Mustangs' 10-game winning streak at Spanos Stadium came to a shocking end.

"We had guys thinking the game was over," Mustang head coach Rich Ellerson said. "That's the sign that a team's not there yet."

Above and beyond the playoff implications which can only be gauged by Poly's ability to respond and bounce back against a tough second-half schedule the perplexing series of events left one burning question: When exactly did losing become a big deal at Cal Poly? When exactly did garnering a berth in the 16-team DI-AA playoffs even constitute a reasonable concern?

It hardly seems that long ago when opposing teams rolled into the valley anointed with a "P" thinking about anything more than an easy "W." Yet, the Saturday scene of elated Jackrabbits, the morose Mustangs, and the completely stunned crowd that occupied Spanos after the loss spoke of different expectations.

When exactly? About three years ago long enough that many, if not most, starting Mustangs never experienced anything else.

"I heard stories about how tough it used to be, just how hard it was to get a win," backfield star James Noble said. 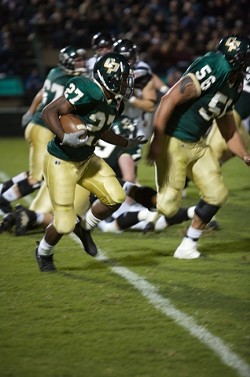 # The sophomore slotback racked up a team-record 1,578 yards and 16 touchdowns in his debut season, propelling Poly to a second-round playoff finish. Starting quarterback Brennan, sophomore flanker Ramses Barden, and redshirt freshman pass rusher Ryan Shotwell, similarly, never suffered more than a handful of losses in their college careers with the Mustangs.

However, for several seniors like the elder Shotwell the experience of mediocrity proved more than lore. Veterans active on the 2002 Cal Poly football team the last losing campaign by a Mustang squad described a lackadaisical attitude among many of the players and a general apathy among much of the fan base.

"It used to be like, 'Yeah, we could win, but if we don't it's all right,'" explained senior offensive lineman Will Hames, who also grew up in Santa Ynez during some of the program's darkest decades.

From the Mustangs' Division II championship in 1980 to 2002, Cal Poly recorded just four seven-win seasons and posted an 18-37 mark in the last five years of that stretch. During that funk, the program recorded back-to-back winning seasons once, with a 5-4-1 record in 1988.

The tide shifted in 2003, when, triggered by a quick start, the club amassed a 7-4 record and made a late playoff surge before a close loss to Idaho State dashed those hopes. Cal Poly which hired the defensive specialist Ellerson from the Pac-10 Arizona Wildcats three years earlier finished the season ranked in the top 30 among division schools in rushing and overall defense.

But, more than anything else, members of that squad expressed a change in attitude, both inside and outside the team. 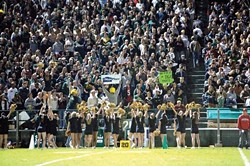 # "Now, we expect to win every single week," Shotwell said, "which is something we talked about that first year and I don't necessarily know if all those guys were buying into it. The only way you can develop that attitude is by winning a lot, and that's something that wasn't happening in the past."

"The seniors were intimate witnesses to all of the struggles we came out of that with some grim determination," Ellerson added. "It wasn't born in a team picnic, or after a big win, it was born in adversity."

In 2004, Cal Poly improved again by running up a 9-2 record during the regular season with a 4-1 mark in league to win the newly formed Great West. Against a tough schedule the following season, the Mustangs finished 9-4 and earned a playoff spot. And, despite Saturday's midseason flounder, the current team's postseason hopes remain alive if it can pull out of a rigorous homestretch without accruing too many more losses.

"After the preseason, you can't think about the schedule," Ellerson said. "And whether you just had a big win or a big loss, you gotta treat it like ancient history."

Following with the success and the postseason hopes came the recognition and, inevitably, the rankings. In both of the last two seasons, Cal Poly climbed into the top five. Compounding a schedule wrought with more heavily funded and recruited D-I opponents, the Mustangs must also fend off upset attempts from hard-nosed squads like Southern Utah and South Dakota State.

# "Every week, the bull's-eye on your back is just huge," Shotwell said. "You're the team everyone wants to beat. You're every team's big game."

However, the fans have also responded. Mustang Stadium set an all-time attendance record in 2004 at 8,395 spectators per game before construction efforts the following season limited available seating.

The $21.5-million renovation project of the nearly 72-year-old venue commenced in the spring of 2005. Upon completion, an expanded Mustang Stadium recently renamed after real estate mogul Alex Spanos, who offered $8 million to launch the project will hold 1,500 more fans. There exists little concern about filling the venue.

During Saturday's game, the athletic department opened up 865 seats in the western addition, pushing attendance to a near record-high 9,042.

"We get a ton more support from the student body getting there early, staying until the end, being super loud," Shotwell explained. "It's a totally different atmosphere and great to be a part of the change that's occurred."

Along with the new amenities for the fans came the promise of new revenue, which, in turn, purchased better facilities for the players. The older Mustangs recalled makeshift dressing rooms and preparing for games on equipment below NCAA standards. The school recently started renovating historic Crandall Gym to provide new dressing rooms for the team.

"It's funny with the younger guys, because they keep expecting more," Hames said. "When we came here, we were just happy to have this stuff. We keep being pleasantly surprised when another step is taken." 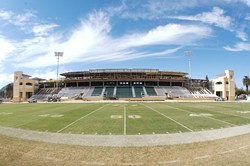 # Due to late winter rains muddying this spring's construction schedules on Spanos Stadium, this year's batch of graduating seniors including Shotwell, Hames, and backfield staples Courtney Brown and Kenny Chicoine might participate in one game with the western addition fully operational.

According to Athletic Director Alison Cone, the dedication ceremony is slated to take place prior to the Nov. 18 season finale against Savannah State. That is, provided the construction remains on schedule.

For the host of players set to return next year, the 2007 season will take place in a fully completed Spanos far removed from the antiquated facilities and dog-and-pony shows endured by past generations of Mustangs.

Cone stated that the department is beginning to draw up schematics on a possible plan to also replace the eastern grandstand. No timetable exists just yet.

"There's certainly some great momentum right now," Cone said. "People are excited about the new stadium and the success of the program."

"It's going to be an unreal experience for these guys, just seeing the changes over the past five years," Hames said. "It's going to be big for them, but I don't think they realize how big.

"They really didn't know what it was like when we were losing and we had nothing."

Staff Writer Patrick M. Klemz wonders who was left watching South Dakota Saturday night. Did they really leave Tom Daschle to sort his own incoming mail? To fill Patrick in, or send him a communique stuffed with binary anthrax, hit up pklemz@newtimesslo.com.