Poolside with a SLO Olympian

Secrets to success were shared as the U.S. Olympic men’s water polo team held its last practice in Westlake Village before flying to Beijing. The team, which includes San Luis Obispo’s Jeff Powers, had been practicing in Westlake Village and Thousand Oaks for months, gearing up for the games. 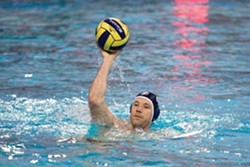 The team’s coach, Terry Schroeder, owns a business in Westlake Village and lives in Thousand Oaks. One of the stipulations he made before accepting the position was that the team must practice near where he lives and works.

Many supporters and friends gathered at a local school pool to watch the team in its final local practice. Powers is a graduate of San Luis Obispo High School who was on the Olympic team in 2004 and has been playing professionally in Europe since.

Before the team members jumped into the pool, they had a surprise visit by Audley Harrison, who won a gold medal as an Olympian for Great Britain in 2000. At first, most spectators had no idea of his identity, or what he was doing there, even though he had a gold medal hanging around his neck. However, recognition didn’t take long and the crowd was soon buzzing.

Harrison talked about his experience when he won an Olympic gold medal in boxing in Sydney, Australia. As he spoke, spectators moved closer to hear his remarks, which were directed toward the team.

Harrison said he trained relentlessly and aspired passionately to win the coveted prize. He found that mental attitude is just as important as physical preparation. So he asked each team member to focus thoughts on the final prize of winning and not be distracted by the hubbub on the way to Beijing.

As he spoke, he reached to insert his iPod into a portable speaker that sent a familiar song. In the background, “The Star-Spangled Banner” could be heard softly throughout the pool area, slowly increasing in volume along with the roar of a crowd on the recording.

Watching Harrison stand in front of the pool’s American flag while hearing him speak of receiving the gold medal was a spine-tingling experience. Like the crowd on the recording, the audience at the pool broke into cheers at the end of the song.

The U.S. water polo team is in China and will first compete at the Beijing Olympics on Aug. 10, in a match against the China team.

Raymond Holm, a writer with a home in Shell Beach, lives in Westlake Village, where the water polo team practiced.