Pop-up paradise: Relationships between breweries and food vendors were invaluable during the COVID-19 pandemic

In January 2020, Brendan Gough opened the doors to his brewery and tasting room, Liquid Gravity, on Clarion Court in a small industrial neighborhood in San Luis Obispo.

The veteran brewer, who worked for Central Coast Brewing and Firestone Walker Brewing Company, wanted a creative outlet to explore different hop varieties, malts, and ingredients, as well as establish a rotating list of new brews.

"Getting my own brewery and opening my own spot was my opportunity to just continue on that path and try to find new things," he said.

Shortly after he opened, the COVID-19 pandemic forced local businesses to pivot if they wanted to continue operating in some capacity. Liquid Gravity's initial business model was to sell beer on draft and in kegs with canned beer sold out of the tasting room. With pandemic regulations, Gough and his team switched to canning almost all their beer.

"The stakes were pretty high. I mean it was literally the survival of our business," Gough said.

Several months later, breweries were allowed to welcome guests for outdoor seating, but customers were required to purchase food along with their beverages. The brewery established a consistent lineup of vendors from Wednesday through Sunday, something that many local breweries and tasting rooms did during the pandemic and hope to continue into the future.

On a busy Friday night at Liquid Gravity, Crescencio Hernandez Villar hovered over the grill cooking up chicken adobo, ahi tuna, or cauliflower in mole verde to be served in fresh handmade tortillas.

His partner, Pedro Arias Lopez, took orders and handed out tacos. Their venture, Corazon 805, started as a catering company about three years ago and morphed into a pop-up food vendor.

Hernandez Villar and Arias Lopez met at Big Sky Cafe, dreaming of a stand at San Luis Obispo's Thursday night farmers' market. It wasn't allowed at the time because they didn't have a brick-and-mortar establishment or a commercial kitchen to work out of. But that didn't stop them from coming up with new recipes that incorporated flavors from their native states of Guerrero and Chiapas, Mexico.

Big Sky Cafe and Novo, where Arias Lopez and Hernandez Villar work, respectively, allowed the two to use their kitchens to prep and purchase ingredients from their suppliers. That support allowed them to form a partnership with Liquid Gravity to provide tacos and tostadas to hungry beer drinkers before and during the pandemic.

Hernandez Villar said working with the brewery has really helped get their name out there. He said that they focus on making food for happy customers who will tell others about them.

Arias Lopez said the opportunity opened the door to working with other tasting rooms, including There Does Not Exist, Wolff Winery, and Broad Street Public House.

They both agree that if they didn't have this opportunity, getting their name out there would have taken a lot more time.

They also credit Arias Lopez's wife, Sara McGrath, who helms their Instagram account where followers can see their Friday night offerings or where their next pop-up will be.

Max Montgomery opened his spot, There Does Not Exist, in September of 2019 with a solid focus on beer. Before that, Montgomery was a brewer at Firestone for about six years with no intention of leaving.

"In my opinion, to this day it's still the gold standard. I love that place," he said.

However, Montgomery had a once-in-a-lifetime opportunity to establish his own brewery, and he felt that if he didn't take it he might regret it one day.

So he took a leap and created a tap list of sessionable brews that have lower alcohol-content. Montgomery's beers almost never have higher than 6 percent alcohol content. 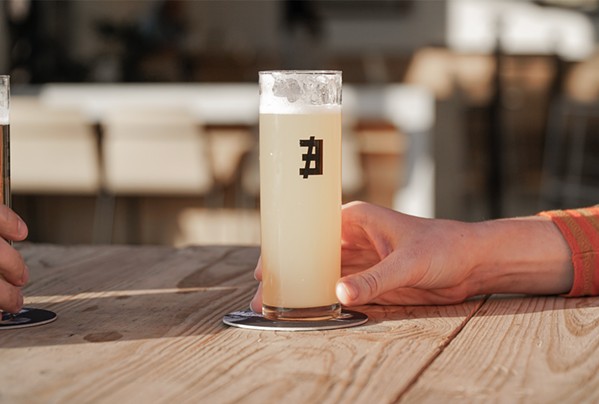 When the local stay-at-home orders went into effect, similar to Liquid Gravity, There Does Not Exist switched to canning beer, selling it out of the tasting room, and home delivery.

There Does Not Exist didn't immediately jump into welcoming outdoor guests with food offerings because Montgomery said they wanted to talk with their staff first and figure things out.

It was also challenging finding food purveyors because they were a hot commodity, and the brewery didn't have relationships with food vendors yet. Although the brewery occasionally booked a food truck pre-pandemic, it was sporadic.

"Now, it's certainly got my wheels spinning about bringing in permanent food," Montgomery said.

He isn't sure whether food offerings in the future will be from vendors or a commercial kitchen of his own, but he's happy with the relationships he's made with food vendors during the pandemic. More importantly, though, he's happy to have people back in the tasting room.

The Hot Meat Society was one of the first vendors to pop up regularly at There Does Not Exist during the pandemic. David Jang and his best friends, Kyle Genevay and Deryk Izuo, cooked up smash burgers that Jang described as a simple cheeseburger that evokes nostalgia and mouth-watering flavors with every bite.

That nostalgia is important to Jang, whose family served classic American food in their restaurant. Jang, who's Korean American, said it was an interesting mix of coming from an immigrant family that ate traditional Korean food at home but served cheeseburgers and BLTs at the restaurant—"The best of both worlds," he said.

Jang came to San Luis Obispo to attend Cal Poly and stuck around to start his career as a full-time art director. During that time till now, Jang has held roommate dinners, where he pairs food with an emotional connection.

"A lot of my food memories are from my grandma, my mom, and my aunts," Jang said. "Whenever we ate, it was always a family moment. There was always an experience that goes with it."

Jang started frequenting There Does Not Exist when it opened and became a friend of Montgomery's. He often joked with Montgomery about barbecuing for the brewery's customers.

When the brewery was ready to host food vendors, Montgomery asked Jang to be a pop-up, and Jang was ready to help support a local business and a friend.

Hot Meat Society served up burgers almost every weekend, but once Jang saw that Montgomery was getting other vendors lined up, he took a step back.

"I felt bad taking that away from people who are really doing this to survive. So I spoke to [Montgomery] and said, 'Hey I think right now the good call is to allow this platform to be available for other vendors to serve food and make money," he said.

Hot Meat Society hasn't served smash burgers since December save for one day on June 5, 2021, when it made a guest appearance at There Does Not Exist.

Jang says it was a one-time thing, but he's glad to have had the opportunity to make food for the public.

Eventually, he knows he'll do it again.

"Whether it's a food truck or a restaurant, that's something I have to do in my life," he said. "Right now it's the chapter in my life that is working here, but, you know, the end goal is really to go back to my roots and what I love." Δ