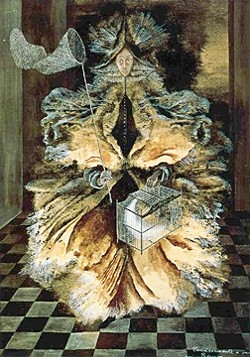 New Times What is your artistic background?

Tess Wright I received a masters degree in art in design and my undergraduate work was in art history. Over the years I have always been interested in women artists and their dilemmas and what they had to do to achieve success, and I have given lectures throughout my life on this subject. After retiring in Cambria, I became associated with The Painted Lily Gallery. My role there is to give lectures.

New Times What draws you to these particular women artists?

Wright For instance, I was struck with Kahlo because of what she had to overcome in her life through art. All of these women have issues. O’Keeffe was married to a powerful artist [Alfred Stieglitz] and had to struggle to figure out how they would do their work. Kahlo as well. They had very long and conflicted relationships. In the ultimate sense, they succeeded. Eventually O’Keeffe went to New Mexico and work on her own. She was never totally comfortable with Stieglitz’s world in New York.

New Times And who is Remedios Varo? (Oct. 15 lecture).

Wright Varo hasn’t been spoken of a lot. She emigrated from Europe. She’s Spanish. She escaped Hitler and was very poor. She started out making stage crafts, and then eventually found a patron and married him. She continued her career in Mexico. Varo was classically trained and was intensely involved in mysticism and her father trained her in scientific research. She has incorporated that knowledge into the magical worlds of her paintings. They are filled with animals, architectural fantasies, and aberrations, and this makes for interesting subject matter. She was embraced here in 1986 in New York when she had a solo exhibition. She is well known; just not to the degree of O’Keeffe. The other thing about these women is they have been marginalized by the academic world, and the critics. Because they chose to go off and explore different subject areas, and they were pooh-poohed for it. The Whitney museum is reevaluating O’Keeffe’s abstractions with an new exhibit opening on Sept. 17. She was very unique in what she explored.

New Times Ultimately what do you want to touch upon with the lectures?

Wright I am interested in their history, their relationships and how they were able to create these interesting works of art from all of that.

New Times What can attendees expect at your lectures?

Wright I might show films or videos, and then I will lecture on the artist. Then I will prepare some kind of dish from The Painter’s Kitchen by O’Keeffe, these were recipes from her kitchen. With Varo, she doesn’t have a cookbook but I will do a Spanish dish. I discuss their lives, I show their work. It’s not a dry academic presentation. It’s an intimate experience. I create a world with these women.

Christy Heron can’t wait for the Lee Krasner lecture. Reach her at cheron@newtimesslo.com.