Last May, “sort of” local act (they relocated to the Bay Area a bit ago) Port O’Brien put out All We Could Do Is Sing, and since then they’ve been promoting the bejesus out of it, including a recent month-long tour across Europe where they played 29 shows in 27 days. 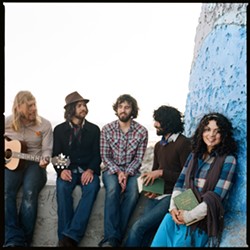 At Downtown Brew this Thursday, Nov. 20, the quirky quartet plays its second to last U.S. show before returning to Europe for a while, then heading to Australia in January for the Laneway Festival, a multi-city indie rock street party that’s like the Lollapalooza of Down Under. They also plan to release a new 7” single over the winter before returning to the studio to record a full-length follow-up to All We Could Do Is Sing.

Last summer, band member Calen Nichols worked on band founder Van Pierszalowski’s dad’s Alaskan salmon boat, as Van does every summer, so these salty sea dogs—which also include Joshua Barnhart (and one salty sea doggett) Cambria Goodwin—have bonded with each other and the sea, and now have brine for blood.

But wait! Who is this mysterious new performer with four gigs?

“Jack is my nickname.& I’ve played the drums since I was 12 and have been writing songs on the guitar for the last 10 years. Influences are many but consist heavily of anything you can still find on vinyl, such as James Taylor, Jackson Browne, Jim Croce, Kris Kristofferson, and many more.”

Jack was “born in Minnesota and raised on folk, country, and singer-songwriters of the Šs.” He brings to the stage an “honesty and wryness often found missing in today’s acoustic offerings. Songs pulse with cutting irony, covering the range from love to jealousy, sarcasm and deceit, to the state of the nation at hand.”

His songs cover veterans’ issues, homosexuality, sex changes, and “the inevitable breakdown of our American Utopia.”

He also notes that his “songs are often peppered with sarcastic wit, and can be likened to watching the proverbial train wreck take place before your eyes. Turn away, and you might miss the best part.”

Sweet mother of weirdness! Where do they dream up these names, and more importantly, who taught them to spell?

Redskunk Jipzee Swing Band plays Coalesce Bookstore this Friday, Nov. 21, mixing the traditional styles of Dixieland with the sweet sounds of gypsy swing and the driving rhythms of Balkan music.

And you’ve got to dig the combo: two guitars, a violin, and a tuba! Yowza! Join Molly Reeves (rhythm guitar/vocalist), Will “Bigfoot” Slavin (tuba/sousaphone), Sam Borman (lead guitar), and Pamela Sheffler (violin) for this 7 p.m., $10 show. Call 772-2880 for tickets. 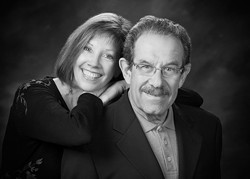 Local jazz stars Lynn Manzella and Bob Harway will make a rare joint appearance this Friday,& Nov. 21 at the Inn at Morro Bay at 7:30 p.m. Lynn’s got a stunning voice, and Bob’s got some serious piano chops, and together they’ll be joined by the Mike Raynor Trio, a tight combo featuring Jacob Odell (guitar), Dylan Johnson (bass), and Raynor (drums).

Along with& the release& of their Jazz CD It’s About Time, they’ve wowed audiences over the last five years in various venues such as the Cambria Jazz Festival,& Art After Dark, and Charter Cable’s Your Jazz Show. 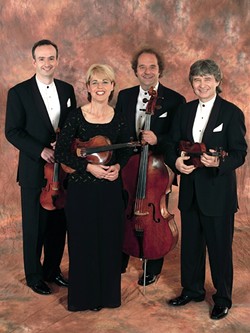 Many more accolades have followed over the past couple of decades in 2001, they were awarded the Order of Merit of Knight’s Cross of the Republic of Hungary in 2007, the quartet joined with Academy Award-winning actor Philip Seymour Hoffman for Everyman, performed at Carnegie Hall and inspired by the Philip Roth novel.

This year, a religion formed around them called Takacsology. Its adherents fall into ecstatic reverie when listening to the quartet’s music and may be considered dangerous when under their musical influence. For that reason, the Takacsologists are currently on CultWatch. (Yes, I’m kidding, but wouldn’t that be cool?)

A pre-concert lecture by Cal Poly Music Dept. professor David Arrivee will be held in the Performing Arts Center Pavilion at 6 p.m. Tickets are $44 general public/$35 students, available at the PAC Ticket Office, by phone at 756-2787, or on-line at www.calpolyarts.org.

The Zongo All-Stars bring their signature “CaliCubano” sound—a hot, high-energy mix of Afro-Latin, Afro-Caribbean, jazz, calypso, reggae, and funk—to Farmers Market this Thursday, Nov. 20 from 7 to 8:30 p.m. at the corner of Nipomo and Higuera Streets. Horns, drums, percussion, steel drum, and bass hit the street, sure to deliver a killer party atmosphere!

Don’t forget Wally Barnick has three upcoming shows this week to promote his new CD View From Lafler Canyon: Thursday, Nov. 20 at Steynberg Gallery (7:30 p.m. $15 547-0278) Friday, Nov. 21 at Painted Sky Studio (8 p.m. $15 927-8330) and Saturday, Nov. 22 at a house concert (7 p.m. $15 674-1877). Bo Dugger (guitar and vocals), Corine Manroe (electric bass, keyboards, and vocals), Robert Olivera (saxes), Jim Christie (drums), and Wally’s daughters Grace and Hannah will join him. This CD can be purchased at any of these shows or Boo Boo Records and Cheap Thrills Records in San Luis Obispo, and online directly from the artist at www.coastridgerecords.com, or by e-mail at wally@barnick.org.

If you were hoping to see hip-hop artists Mickey Avalon and Dirt Nasty at Downtown Brew on Friday, Nov. 21, you’d better already have tickets or know whose wheels to grease at the club, because this one’s sold out, slow pokes.

Davis-based act Shayna and the Bulldog hit Frog and Peach this Saturday, Nov. 22 to deliver an evening of pop rock. The self-proclaimed “quartet of music geeks who enjoy hanging out together and playing music” perform material that “makes people forget about all the stressful stuff that accompanies living, even if it’s just for the length of a song.”

Desolation Wilderness are not breaking any rules or changing the face of music with their dreamy, languid songs. Heavily dipped in lulling reverb, this is music as rewarding as a reviving stretch and yawn from your after-work nap. Lacking any abrasive edges, Desolation Wilderness walks through ten tracks warmed with the analog sound of vintage tube amps and effect pedals that draw comparison to the shoegazing stride of Galaxie 500 or My Morning Jacket at their sleepiest. Singer Nicolaas Zwart obfuscates his lyrics behind so much delay, translation and comprehension is near impossible, though completely serene. Filled with elongated synthesizers, xylophones, and glockenspiels tones along side trembling guitars and cottony snares, White Light Strobing is a seduction of mood. Pillowy soft and gently hypnotic, Desolation Wilderness makes ethereal music for sweet dreaming.

There are few names that can attract the attention of so wide a range of music followers as former Talking Heads frontman David Byrne and ex-Roxy Music, producer extraordinaire Brian Eno. You can see flashes of their influence everywhere—from Byrne’s frantic yelping to Eno’s atmospheric ambient leanings—as a new generation of musicians recycle their sounds and ideas. Their last collaboration came in 1981’s My Life In The Bush Of Ghost, which synthesized electronics, world music, and a litany of samples together into a pioneering achievement. Though they describe their new collaboration as “electronic gospel,” Everything That Happens Will Happen Today hints more at the middle period of Talking Heads—where pop ambition out-shined artistic quirk—than anything in Byrne’s recent history. This may not be the awe-inspiring album that fans of both men’s more cutting edge material will want. But this is a welcome return, and the uplifting tone of the album seems to fit our moment of time precisely.

Glen Starkey was born naked, wet, and hungry. Then things got worse. Tell him your problems at gstarkey@newtimesslo.com.