The best free show you'll see this week is when Portland band Balto plays The Siren this Thursday, April 18 (8:30 to 10:30 p.m.; 21-and-older; free). Immediately accessible, this is a band you'll feel like you already know. 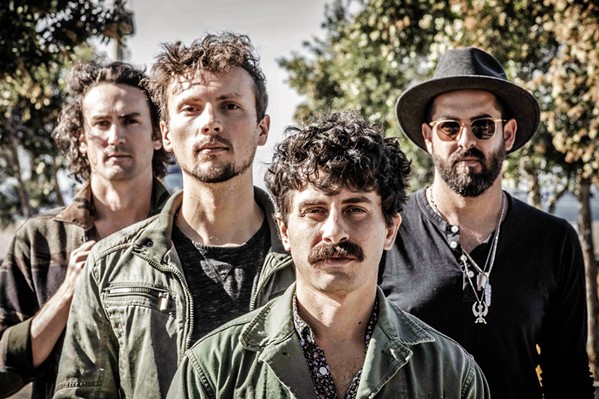 The band's loose beginning started in NYC after singer-songwriter Sheron returned from a failed journalism career in Russia, though his bio weaves a more dramatic story: "At 21, after a failed attempt to begin a journalism career in Moscow and an overwhelming heartbreak, Dan Sheron's life collapsed. Without so much as saying goodbye to his friends or bothering to pack a bag, Dan took a train bound for Siberia and headed east with a child's guitar and journal that quickly filled with songs. At some point in those manic months, Balto was born, in a third-class train car, singing and drinking among strangers, somewhere east of Novosibirsk."

"Over time, Balto transformed from a songwriting vehicle into a rock 'n' roll band—performing a boozy, swaggering style of American music rooted at the intersection of Motown, Big Star, Plastic Ono Band-era Lennon, and Jackson Browne. Their interactive live performances have drawn comparisons to fiery indie rockers My Morning Jacket and Wilco, while Seattle-based curators Artist Home describe their most recent LP, Strangers, as 'a tangle of beautiful, messy emotions, wrapped up in a sound that's warmly familiar yet brimming with soul and tiny details that are touched by magic.'"

How this is a free show I don't know, but take advantage of it! 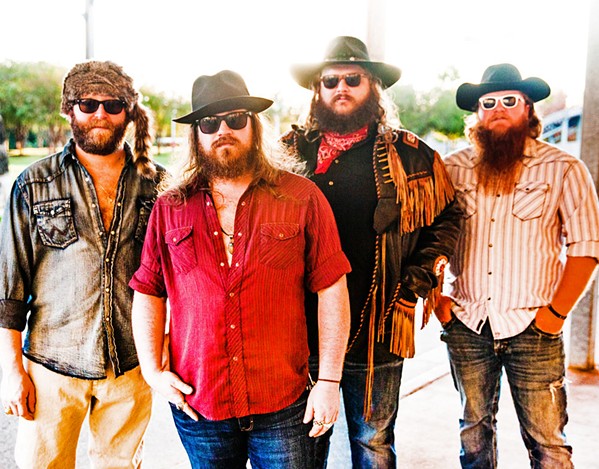 Also at The Siren this week, Numbskull and Good Medicine Presents has teamed up to bring you Copper Chief on Wednesday, April 24 (7:30 p.m.; 21-and-older; $10 presale at Boo Boo's and ticketfly.com or $12 at the door). The Austin, TX, country rockers describe their music "as a breath of fresh air while puffing your favorite smoke." If you like bluesy-southern rock, check out these longhaired outlaws. 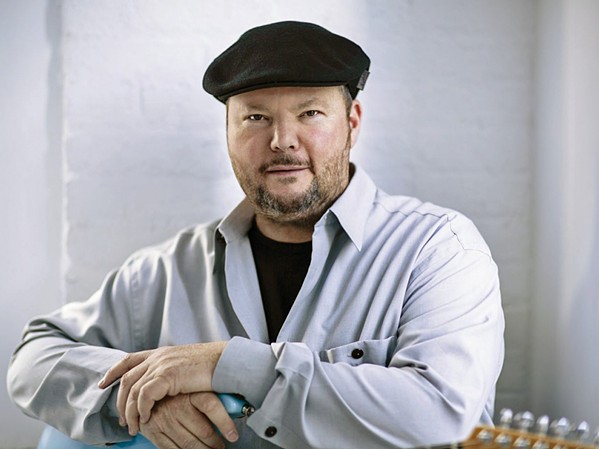 Cross' 1980 self-titled debut album won five Grammy Awards, including—for the first time ever—the four most prestigious awards: Record of the Year (for the single "Sailing"), Album of the Year, Song of the Year (also for "Sailing"), and Best New Artist.

According to press materials, his newest album, Take Me As I Am, "is a unique offering from Christopher Cross, a hybrid of sorts—the songs are instrumentals with choruses to create the lyrical landscape. This is not quite a 'guitar' album, but it leaves the listener with no question about his expertise on the subject."

Cross said about the project: "It was a blessing to work with all these talented folks in the making of this album, which holds so many bittersweet emotions for me. I didn't expect to make another one, but it's what we do."

Don't forget about Superorganism at the Fremont Theater this Thursday, April 18 (9 p.m.; 16-and-older; $24.96 at Boo Boo's and fremontslo.com). This international music collective's live show is a visual and sonic feast.

Rapper Earl Sweatshirt plays the Fremont on Sunday, April 21 (9 p.m.; 16-and-older; $36.69 at fremontslo.com and Boo Boo's). The child prodigy who released his first album at 16 is, like a lot of rappers, unafraid of tooting his own horn: "In terms of the lineage of all the shit that I've done, niggas have really, really grown up with me," he said in press materials. "I'm a surviving child star." Liv.E & Mike open.

Singer-songwriter Devin Dawson brings his smooth sounds to the Fremont Theater on Wednesday, April 24 (8 p.m.; 16-and-older; $27.31 at Boo Boo's and fremontslo.com). His debut single, "All On Me," landed the California native on Late Night with Seth Meyers, his first Grand Ole Opry performance, and a whole lot of critical praise.

Country star Aaron Watson plays the Fremont on Thursday, April 25 (8 p.m.; 16-and-older; $30.83 at Boo Boo's and fremontslo.com). His 2017 album, Vaquero, hit Top 10 on the Billboard 200 Albums chart and at No. 2 on the Top Country Albums chart. His 18-year career has yielded more than a dozen critically acclaimed albums. Kylie Frey opens. 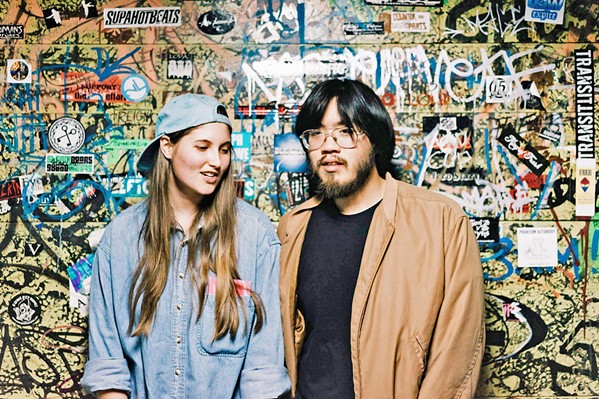 Featuring longtime friends and collaborators, Lauren Morgan and Jordan Shih, the minimalist guitar-based pop act adds percussionist Malcolm Martin when touring. The Orlando-based band got its start in 2013 with the release of "renee," and has since gone on to get exposure for the singles "big sis," "ivy," and "jamz." I'm guessing they dig e e cummings and his eschewing of capitalization! 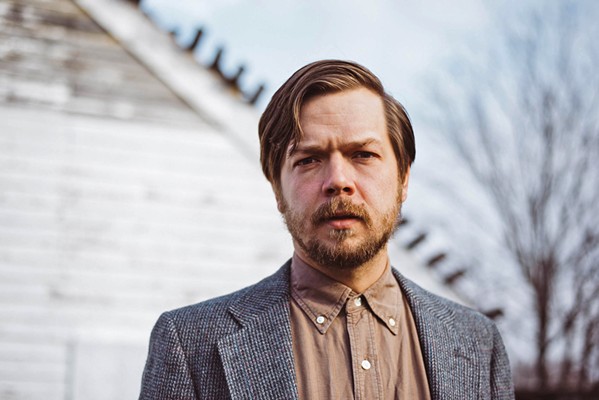 His songs reflect on our bitterly divided society and polarizing politics, yet his songs spring for hope, "encouraging those who listen to focus on activism and community-building rather than despair," his bio said. "Born into a working-class family in rural Oklahoma, Porter graduated from Yale University and then moved to San Francisco to teach in an inner city school system while launching his songwriting career. In the midst of the nation's most expensive real-estate market, he had a close-up view of the growing class divide and its many symptoms, including poverty, gentrification, and homelessness. During these experiences, Porter wrote Communion in the Ashes, and with its Springsteen-sized catharsis, the album offers listeners a soundtrack with which to rise up, rebuild, and renew."

Also at the Frog, check out three-band touring collaboration Hot Sweet N Sour on Tuesday, April 23 (10 p.m.; 21-and-older; free). Featuring three of Portland's talented, up-and-coming bands, expect "a unique sense of humor ... and ... a lush and high energy night of entertainment. You will dance. You might cry," read press materials.

Sweet N' Juicy is touring in support of their newly released sophomore album, The Adventures of Sweet N' Juicy. Get ready for party music from a band that performs in fruit costumes.

Funky hip-hop sprinkled pop act A Hot Mess is touring in support of their debut, Funk Finger. Their motto is, "Let's get messy!"

Laryssa Birdseye is a folk singer who accidentally started writing pop music. She uses humor and honesty to enchant her audiences.

Arroyo Grande's The Clark Center has your Bee Gees fix when tribute act Night Fever plays this Saturday, April 20 (7:30 p.m.; all ages; $45 to $55 at clarkcenter.org or (805) 489-9444). This all-Canadian cast has been touring for the past 10 years, from Disneyland to Russia, recreating the look and sound of the Bee Gees. Ted Waterhouse has put together a new jump blues act called The Jump Jax, playing this Saturday, April 20, in Puffers of Pismo (7 to 10 p.m.; all ages; free).

"We're an electrifying new quartet fresh on the Central Coast music scene," Waterhouse said. "Consisting of four seasoned and professional musicians, this group brings an energetic mix of classic jump blues, swing, soul, and rockabilly along with tasty originals that are guaranteed to get feet moving and hearts pounding." Δ