Portraits in the dark

Finding a few words to sum up the work of Los Angeles artist Kathryn Jacobi is a fool’s errand. “Intense” easily describes much of Jacobi’s striking portraiture, which comprises half of the artist’s current Steynberg Gallery exhibit. Figures emerge from blackness or abstraction to stare the viewer in the eye, or wrestle with one another in fits of rage or passion. Faces are strangely contorted, mouths gaping, either in unknown emotional tumult or simply captured in mid-song. 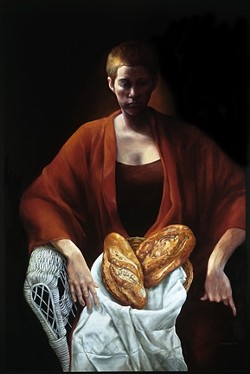 But this descriptor hardly accounts for the other half of the exhibit, which features Jacobi’s imagined landscapes: lush, melancholy vistas of green and blue and gold. In contrast to the finely rendered details of Jacobi’s portraits, with their perfect folds and veins, the edges of these wild lands bleed into one another, so that it’s often unclear where sky, water, and earth meet.

(Other works straight from the artist’s imagination tend to be less tranquil and more terrifying—filled with ghostly figures of absurd proportions and floating, blood-red heads—but those nightmarish visions aren’t present in this particular exhibit.)

The first half of Jacobi’s Steynberg show entertains a motif of the human body and its relationship to music: Portraits of singers and violinists performing hang beside the naked, tangled bodies of Operatic Duet Study 1 and 2 and Tristan and Isolde, an intriguing take on the fated lovers from the Wagnerian opera of the same name. A nude male figure—Tristan—stands above the kneeling Isolde, who holds his body close, one hand trailing down his chest. The scene appears at once passionate and violent, as the man grips the woman’s head in his hand, pulling back her hair. Jacobi leaves the image, with its suggestions of fellatio, rather ambiguous, and I can’t work out whether the scene reveals acts of lust and gratification or hatred and coercion. Wagner’s opera itself contains elements of both, with Tristan killing Isolde’s fiancé, and Isolde trying to kill a wounded Tristan with his own sword, but becoming transfixed by his eyes. Isolde later attempts to poison him—and herself, while she’s at it—though the poison turns out to be … love potion. It’s a complicated relationship.

Jacobi, born in 1947 to a writer and a portrait painter, seems to embody both elements in her work, telling her own tales while paying homage to the classics. A fair-haired man belts his heart out in a work called Mephistopheles (Blond singer). Its title, a reference to the Faustian demon, seems at odds with the rather jovial-looking character it depicts. There’s something weighty and pressing about the darkness that surrounds each subject: In Mephistopheles, the man’s head and arms are the only visible parts, everything else swallowed up by the black.

The striking Girl with Bread deviates from the themes of classical music and brooding German literature. A young woman with short reddish hair and crimson robes sits in a white wicker chair, a basket of bread in her lap. Her face in partial shadow, she gazes downward with a look of gloomy acceptance. Once again, she emerges from blackness, adding drama and mystery to the scene. Seeing the ring on her finger and the loaves in her lap, I want to draw some conclusion about fertility, but I can’t quite get there. Instead, the woman is a beautiful and rather frustrating enigma, a poignant kind of half-story.

The same can be said, in fact, of much of the exhibit: Girl with Carrots appears a whimsical depiction of innocence and the outlandish fashions it allows (Tutu and rain boots? Of course.) Judge 1 and Judge 2, which depict, respectively, a white man and a black woman, hang side by side, their clothing nearly identical.

Then there are the landscapes, perhaps influenced by the forests of British Columbia, where the artist owns a second home and has spent much of the past 20 years. The vistas of Jacobi’s mind, with their greenish yellow clouds and ominous blue-black skies, are otherworldly, haunting places, dreamlands at dusk. As if rebelling against the awe-inspiring precision of the first half of the show, here Jacobi sets her brush free, creating the kind of messy, spontaneous beauty that can only emerge from total abandon.

Arts Editor Anna Weltner emerges from the shadows. Contact her at aweltner@newtimesslo.com.