There's been a lot of flexibility required of Katie Morris and her family since schools closed at the onset of the pandemic in March. With local cases of COVID-19 currently surging and concerns about rates worsening amid the holiday season, it doesn't look like things will get easier anytime soon.

Morris, a Grover Beach resident, has been working almost entirely at home for more than seven months now, both to reduce person-to-person contact and to help her two kids—a middle schooler and first grader in the Lucia Mar Unified School District—through the distance learning process. 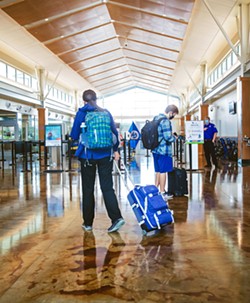 The end of last school year was, as Morris described it, "unorganized chaos," and understandably so considering the emergency situation. But once her kids were out of school for the summer, Morris and other parents had hoped the district would use the break to develop a strong reopening plan.

It's been a long road since then. After countless parent surveys, meetings, research, and one other near opening, the Lucia Mar board of education approved an updated reopening plan on Oct. 16.

"The social and emotional growth that kids experience during school in-person is huge," Morris told New Times, "and we can't learn that through distance learning."

Immediately, she started planning for at least a partial return to her office, arranged potential after-school child care options, and she reached out to family and friends who might be willing to drop her kids off at school.

Then, shortly after Halloween, SLO County Public Health reported an "alarming spike" in COVID-19 cases. On Nov. 16, the state put SLO County back into the purple tier, which means COVID-19 is considered widespread and restrictions are more stringent. Now, many school districts like Lucia Mar that had plans to reopen can't, and school officials worry the gatherings and travel that so often come with the holidays could lead to further disruptions in the near future.

"So all of that effort that all of these families have done to prepare for a Nov. 30 return is kind of null and void," Morris said, "because of [Lucia Mar's] decision to not even go for a waiver."

When SLO County was in the red tier—one step more open than purple—all schools were able to start reopening without Public Health-approved waivers, and several districts throughout the county made plans to do so. But where the county stands now, only programs and classes that have already opened and elementary schools in districts with approved waivers can continue or start opening for in-person instruction.

That means Lucia Mar's general middle and high school programs can't reopen until two weeks after SLO County re-enters the red tier, and elementary schools can't reopen unless the district applies for and is granted a waiver.

At a Lucia Mar board of education meeting on Nov. 17, several parents called on the district to apply for a waiver so that at least elementary school students would be able to return as planned, but a majority of board members said they couldn't support reopening while in the purple tier.

"A waiver is an exception to the rule," board member Colleen Martin said at the meeting. "That's what a waiver is. And pretty much what the rule's been is that if you're in the purple, you're not opening schools."

So far, Atascadero Unified School District is the only traditional public school district in the county to receive a waiver from the Public Health Department, and it opened its elementary schools for in-person instruction on Nov. 16.

For other public school districts, the post-Halloween spike and looming holiday season are creating obstacles to reopening. At a "Returning to School Safely Webinar" on Nov. 16, several SLO County school district leaders expressed concerns about returning to in-person learning immediately after the winter break, and some are considering delaying returns until at least a week after New Year's Eve.

Although hotel occupancy and airline numbers for the week of Thanksgiving weren't available before press time, a search of SLO County's Airbnb listings shows limited availability mid-November. Data provided to New Times shows that passengers using the SLO County Regional Airport increased by more than 160 percent between April and October this year, jumping from just 2,682 travelers in April to more than 24,000 in October.

Travel usually increases over the holidays, so the potential for a more intense local COVID-19 caseload after the holidays is concerning to Paso Robles Joint Unified School District Superintendent Curt Dubost, who said he desperately wants schools to reopen for safe in-person instruction.

Paso welcomed preschool and kindergarten students back to school on Nov. 2, and had planned to bring back secondary students on Jan. 5. Now Dubost said the district is considering pushing the Jan. 5 return date back at least four days to create a bigger gap between New Year's Eve and the start of school. Either way, students in those grades won't be able to attend school on campus until SLO County makes it back into the red tier.

The San Luis Coastal Unified School District is opting to keep kids in distance learning until Jan. 21, which is the earliest they could transition to in-person—the county has to remain in the red tier for 21 consecutive days before students can return to campus.

The state's ever-changing guidance has been frustrating, Dubost said, and it's hard to comprehend why a school that happened to open earlier should be allowed to continue doing so while others can't. But Paso can take it, he said.

"We will make it work," Dubost told New Times. "And the people that are here, we're so used to getting a curveball that it's like, 'OK that's today's challenge. Let's fix it and move on.'"