'Potted Potter' at the PAC

Or, how a small child conjured up Lord Voldemort a.k.a. You-Know-Who 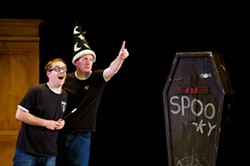 It is 5 p.m. on Sunday, Nov. 17. As I walk into the Performing Arts Center at Cal Poly, I wish I had packed my vast array of Potter-related-costumes into my suitcase, but alas—Virgin Atlantic only allows 23 kilos* of luggage and thus I must merely come as a tepid Muggle. Sob. We sit down whilst Delme Thomas, one of the Potted Potter duo, is furiously shaking hands with members of the audience. And now the play is starting! Potted Potter is the Harry Potter series condensed into a mere 70 minutes, 10 minutes to complete each book. I am excited.

James Percy is playing Potter, and unfortunately Del (the man I didn’t interview last week) has to play every single other character. Del’s shtick is that he has not read the books. He neglects to draw a scar on James’ head and instead writes “HARRY” in block capitals. Del has also allegedly spent all the money set aside for Broadway’s finest actors on the dragon in Book 4. Yikes! The set too has apparently suffered: The Forbidden Forest is an image of a beach with “KEEP OUT” graffitied over the idyllic image. There is a wardrobe, too. It turns out Del got a little confused between Narnia and Hogwarts. Two warthogs on a skateboard represent Hogwarts. Each book is introduced by a lighting change and a funny dance across the stage where James wobbles his head a lot and skips. I think that is to signal that he is going into character as Potter—what fun!

It's like a pantomime with a whirlwind of characters as we race through the books. After the actors complete each book, we cheer. Loudly. Hurrah! Hurrah for Potter! Suddenly the show turns interactive—a Quidditch match! We are split into two teams. I am in Slytherin and I boo and hiss because that’s what I think I should do. Everyone else is cheering, so I quickly adapt. Nothing like team morale.

Two small children are picked as Seekers. Our Slytherin Seeker is a girl dressed like a cake. So many layers of pink and white sheen silk adorn her outfit. I am not sure if she is dressed up as a Potter character—maybe she got the memo wrong and came as a birthday cake. Oh well! We now are playing with a giant inflatable ball that is being bounced around the audience. Team Slytherin vainly try** to aim the ball into the Gryffindor hoop. Suddenly the game is paused by a deafening whistle. One portly, paternal figure in the audience is refusing to play with the ball—boo! Hiss! Del relegates him to Hufflepuff, oh the shame! Meanwhile, the seekers chase the Golden Snitch across the stage. The Golden Snitch is actually not a snitch but James dressed up in a gold costume that resembles Bob the Builder. Gryffindor win as their small Seeker body-slams the Snitch to the floor—no easy feat, as he is about the size of James’ face. I am sad that Gryffindor have won, and feel sweaty and cross. But no matter, as now Del sprays a water pistol into the Slytherin side of the audience so I am cooled down and am soggy and less cross. Now Harry Potter (or James) is in the graveyard, nervously awaiting the arrival of the evil Lord Voldemort. He keeps calling out “Voldemort, come out, come out wherever you are.” There is silence. He tries again. In the audience, a small voice belonging to a child no more than 5 years old takes matters into his own hands and decides to help. In a childish American accent, he too calls out, “Voldemort, come out please.” The juxtaposition between the boisterous English accent of James and the timid, yet ever so helpful American child is fabulous, and I nod my approval.

Now, the prophecy pertaining to Harry Potter and Voldemort is announced by Dumbledore (a.k.a. Del in a dodgy wizard’s hat and no trace of that astonishing beard). He announces again and again, “One shall live and one shall die, die, die,” using his voice to create an echo effect when announcing the death part. After hearing him say it at least 14 times, I too want to die, die, die.

We are nearly at the end of the seven books, so to wrap it up, some microphones are brought on stage and the boys burst into song (to the tune of Gloria Gaynor’s “I Will Survive”) and wittily condense the ending of Harry Potter into rhyme complete with sassy dance moves. I am a little exhausted. So much cheering. It’s been an emotional whirlwind. I like the way they adapt to the audience: Once or twice they make quintessentially English references, which fall flat on our predominantly American audience, so they just cruise on singing, “This clearly doesn’t translate to Ameriiiiiiica.”

I do feel the show caters to a younger audience, so I’m not sure I would “Slytherin” to another show, but I was very happy to indulge in some childhood regression.