Pottery Coast is located at 480 Front St. in Grover Beach, inside the historic Channel Island Arts Inc. building. They offer wheel and handbuilding tribes, memberships, and open studio hours seven days a week. Memberships are $99 a month and give access to the studio every day from 10 a.m. to 9p.m. Visit potterycoast.com for more information.

In a nondescript industrial area on Front Street in Grover Beach, a hub for artists is tucked away, just out of sight. The words "Channel Island Arts Inc." in faded paint are just above a newer, brighter coat of paint that reads "Pottery Coast."

The creative makers spot was opened just a few months ago by owners Greg and Susan Bass after Susan struggled to find a place to commune with other artists that was also set up with everything a ceramicist needs. 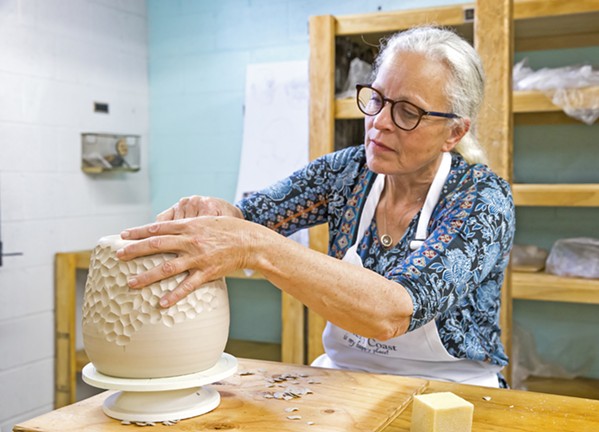 The two moved to the Central Coast to raise their family 18 years ago, but the art bug bit her after she attended an art fair seven years ago. Shortly after that, she decided to take a ceramics class with a friend and was instantly hooked.

"There's something about clay, that earth element, when you touch it," Susan said.

She wanted to do more, but most ceramics classes offered at schools and colleges were seasonal, and studios tended to limit artists to just a few hours to drop in and work on projects. So for five years, Susan toured pottery studios in California, Nevada, and New York to get ideas. She wanted to open the perfect space to create on the Central Coast as part of her Master of Fine Arts project at Sierra Nevada College.

"Pottery is community; it's something you do together," Susan said.

In that spirit of togetherness, Pottery Coast offers memberships where artists are given their own access code and can come in and work seven days a week from 10 a.m. to 9 p.m., along with different classes called "tribes," where artists can gather and work at the same time or get a little instruction from Susan.

Until a year and a half ago, the building housed Channel Island Arts Inc., a bronze foundry that made just about every bronze statue in the SLO area (including the Cal Poly mustang) for several decades. To honor that legacy, the Basses have kept the old sign up, and Susan made a special bronze glaze, along with her other homemade glazes that are available for artists to use. From the prized large gas kiln, to an outdoor area for glazing, to a series of stations with potter's wheels, to a cabinet filled with every tool a ceramicist could need, to another cabinet filled with vino to help get the artistic juices flowing, the Basses have carefully stocked the space with just the right things in just the right layout for a piece to start as a lump of clay and come out of the kiln shiny and newly transformed into a work of art.

"People can come in and practice all they want," Greg said. "It's all to build an arts community."

Right now, Pottery Coast is the only high-fire studio between Pasadena and San Jose and has 50 members so far. Greg and Susan said they think they'll end up capping the number of memberships at somewhere between 64 to 78.

"I think art can do a lot for a community," Susan said. "And it's right by the beach." Δ