Power down? Central Coast Power is 'infeasible,' study finds, but a SLO-based program may work

According to the study, the rates for a theoretical Central Coast Power would not compete with those of PG&E and Southern California Edison, the current utilities that serve the region, due to high costs, and the program would dive into the red over an 11-year period. 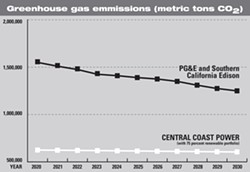 "Net operating margins are negative for all years of the study period, meaning revenues are not sufficient," the study, authored by Willdan Financial Services, stated. "The CCE is deemed infeasible."

But a "peer review" published alongside it challenged some of the study's calculations, like the projected price of renewable energy in the future, and suggested that a smaller, SLO County-based version of the program may be viable.

If Central Coast Power was able to become a reality, with an aggressive renewable energy plan, it would manage to cut in half the level of greenhouse gas emissions (GHGs) currently associated with power generation for the region.

The power of choice

CCE programs like Central Coast Power are regarded as effective methods to combat climate change on a local level and are rapidly growing in popularity across California.

Enabled by state legislation passed in 2002, CCEs essentially give local governments the option to buy their own power and sell it to residents and businesses in their jurisdictions through existing distribution infrastructure. The overall goal, typically, is to lower community GHGs by choosing to purchase more renewable energy than investor-owned utility companies.

"The importance of CCEs is it allows you to localize your decision-making relative to your power purchases," explained Marcus Carloni, the sustainability coordinator for the city of SLO. "What it allows us to do is basically disconnect from PG&E's decision-making so we can decide what's best for our community. ... That allows us to lower communitywide greenhouse gas emissions."

After a nearly decadelong fight over the CCE concept between California lawmakers and the major utility companies, Marin County launched the state's first CCE in 2010.

Today, 18 localities are either operating a CCE or are about to launch one, including SLO's neighbor to north. Monterey Bay Community Power will begin this year and cover Santa Cruz, Monterey, and San Benito counties.

Seventeen other regions are exploring CCE programs—including the Central Coast.

In 2015, the tri-counties and eight local cities (including SLO) formed a Central Coast Power working group and commissioned the feasibility study.

Chris Read, an energy program coordinator for SLO County, said that the extra-competitive dynamic puts the prospect of a Central Coast Power at an economic disadvantage.

"The critical challenge was the fact that there were two service territories involved," Read said. "It makes it harder for a new energy agency to compete."

In order for Central Coast Power to be financially feasible, the study stated, energy costs would have to decrease by 40 percent over the next decade, and the utility companies' rates would have to increase by 4 percent every year.

A peer review of the study, though, suggested that the authors might have been too conservative in their number crunching. The peer review stated that the study possibly overestimated the future cost of renewable energy, which drove the rates for the CCE up.

It also indicated that a smaller-scale CCE, operating in PG&E-only territory like SLO County, might be fiscally viable.

"[The peer review] essentially concluded that if you're in Southern California Edison territory you have difficulty," Read said. "As you get into PG&E territory, it looks like it would be feasible to have a program."

Read said the county and cities are awaiting the results of yet another study that's evaluating the viability of a CCE based in SLO County.

Carloni with SLO said he will bring forward CCE options to the SLO City Council in December, which may include exploring a countywide CCE, a city-only CCE, or joining another established CCE program.

Earlier this year, the SLO City Council named "climate action" as a major city goal, and Mayor Heidi Harmon has advocated strongly for SLO to move toward "net-zero" emissions status.

While PG&E currently gets about 33 percent of its energy from renewable sources, the Central Coast Power agency could offer a 75 percent renewable portfolio under its most aggressive plan, leading to a substantial reduction in related GHG emissions.

But CCE programs aren't without risks, as the study indicated. Even a SLO County-only program would require as much as $179 million annually to stay afloat.

"Should we start a new government with a high upfront debt requirement?" Read asked. "Obviously, it's ultimately a political decision. When you're looking at it there's just some risk, especially in the tri-county area." Δ