PG&E has spent $3.5 million toward an initiative that would hamper development of public utilities but a senator is fighting back 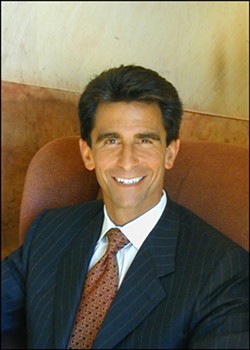 The proposed initiative as originally titled, “The Taxpayers Right to Vote Act,” was submitted to the state attorney general’s office in June by the Sacramento law firm Nielsen, Merksamer, Parrinello, Mueller & Naylor, which has a long history of working with PG&E on political issues. The attorney general renamed it, “New Two-Thirds Requirement for Local Electricity Providers Initiative Constitutional Amendment,” apparently to clarify its purpose. If enough voters sign petitions to qualify the proposed initiative for the state ballot and it passes by a simple majority, municipalities, counties, and other local government entities planning to establish or extend a community utility could not move forward unless two thirds of voters in elections within their jurisdictions approve.

“Bottom line is this is a desperate monopoly struggling to hold on to the privilege of their monopoly,” Leno told New Times.

“There are probably few facts that have caused greater dysfunction to the operation of California government than two-thirds majority vote,” Leno said. “There’s something clearly unfair about a simple majority amending the Constitution in order to require a two-thirds majority to allow people to choose how they want their energy delivered, and what kind of energy they want delivered.”

The initiative would complicate implementation by local governments of community choice aggregation (CCA). Since 2002, California has allowed local governments to aggregate the electricity needs of residents and businesses and buy blocks of power to sell to them, enabling municipalities and counties alone or in combination to shop for less-expensive alternatives to such private companies as PG&E, and favor suppliers who use nonpolluting wind, solar, geothermal, and hydroelectric generation. Whatever utility owns the existing transmission lines and equipment is obligated to distribute the power. Under the proposed initiative, any governments already managing CCA programs could be stymied from expanding public power to new territories or customers unless two-thirds of voters approve.

Leno said though the resolution does not specifically identify the proposed initiative being funded by PG&E because it has not yet qualified as a ballot measure (about 700,000 voters must sign petitions to qualify it) the resolution would put the party clearly on record in support of community choice aggregation and against “any efforts to deny ratepayers their choice.”

“PG&E knows that if voters are able to exercise their democratic rights, we will see community choice aggregation in California proliferate,” Leno said. “This initiative is an aggressive attempt to steal voters’ democratic rights.”

Not the case, according to Greg Larsen, of the Sacramento public relations firm Larsen Cazanis, a spokesman for the initiative. He argued that a two-thirds majority requirement hardly would be a death sentence for any well-conceived
ballot measure.

“For nearly a hundred years of Californian history for long-term capital decisions, the two-thirds vote has been a consistent standard,” Larsen said. “If it’s a sound, fiscal concept put before voters, Californians have shown they will approve it.

“This doesn’t stop anything from being enacted at all,” Larsen maintained. “All it does is require that people who pay for any government entry to the energy business have the right to vote on it because it is expensive. It can ring up debt that will last for generations and when you choose to spend a substantial amount of money on a government program, those dollars have to come from somewhere—usually from other programs. All it does is set a statewide standard for how these issues are received.”

Larsen said the initiative does not target CCAs and pointed out that the proposed amendment provides exemptions to programs that are 100 percent renewable.

Apparently, no one sent the memo to PG&E. Larsen’s assertion that the initiative does not target public power was in effect contradicted by PG&E spokesman Andrew Souvall.

Asked if PG&E was looking to stifle competition with the initiative, Souvall answered, “PG&E would like to give taxpayers more control over their hard-earned dollars.”

Leno said it’s possible his upcoming resolution will be voted down by the
party’s Resolutions Committee but expressed confidence.

“It was the Legislature which created [CCA], so this should not be a stretch for the Democratic Party to support something its Legislature has already enacted,” Leno said. “But given the threat of the ballot measure, it’s important the party put itself on record.”

Regarding the original title of the proposed initiative PG&E is financing, Leno chuckled. “That’s the insidious nature of their deception,” he said. “It’s very transparent what they’re trying to do.”

Leno has a record of supporting public power projects, which has often left him opposing PG&E. Marin County, within Leno’s 3rd Senate District, is one of several counties in the state with a CCA program. Last year, PG&E formed a committee called Protect Our Kids, to oppose then-Assemblyman Leno’s run for state Senate. Protect Our Kids received $49,900 from a group called Californians for a Clean Energy Future, who listed the law firm Nielsen, Merksamer, et al. as a contact.

In June, Leno called on the California Public Utilities Commission to investigate PG&E’s service blackouts in San Francisco as the company was requesting a $2.2-billion rate hike.

At about the same time, PG&E began financing the Californians to Protect Our Right to Vote committee, which, according to state records, lists itself as “A Coalition of Taxpayers, Environmentalists, Renewable Energy, Business and Labor.” The committee has until Dec. 21 to gather 694,354 signatures for the initiative to qualify for the June 2010 primary. So far, the energy company has poured more than $3.5 million into the committee, with a contribution of $500,000 as recently as Oct. 30.

Souvall would not comment on how many signatures have been gathered to
date, but Larsen said the committee is “doing very well,” and that he was confident registered voters would qualify the initiative for the election.

If it does qualify, CCA proponents have their work cut out for them. The PG&E-funded committee has enough cash on
hand for a massive advertising campaign but local governments are prohibited from spending public funds or campaigning for ballot measures.

“There are community activists and CCA proponents that have been working for years to bring it forward who are very concerned, knowing the unlimited resources that [PG&E] can bring to a ballot measure,” Leno said. “That’s why those of us who are engaged need to get further engaged. And I think it’s very possible, thanks to the Internet, [PG&E’s] tens of millions of dollars can be defeated through voter-to-voter communication and that the people’s will can prevail.”

Though San Luis Obispo County does not yet have a municipal energy plan, a 2008 survey of 2,000 residents by the Air Pollution Control District showed that 94 percent would support local government efforts to provide additional energy from renewable resources. Asked whether they would be willing to pay 5 percent more for energy from renewable sources, 64 percent still answered yes.

“This is really a battle between the rights of ratepayers and a monopoly,” Leno said. “Choose your side.”

Staff writer Matt Fountain can be reached at mfountain@newtimesslo.com.