California's hotter than usual temperatures are more than just a sweaty nuisance, they could lead to widespread power outages throughout the state and in SLO County. 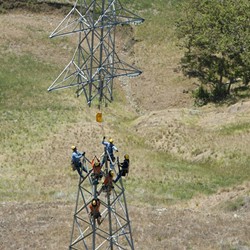 On Aug. 14, the California Independent System Operator (CAISO) released a series of "flex alerts" warning state utility companies that rotating power outages would likely be necessary throughout the week of Aug. 17. PG&E followed those messages up with its own outage information, alerting customers that blackouts are likely to occur in two-hour shifts from Aug. 17 to 20 between 3 and 10 p.m.

The rotating outages—which are not the same as PG&E's Public Safety Power Shutoffs used to prevent wildfires—are needed because of the current strain on California's power grid, according to Diana Turk, a marketing and communications representative for PG&E. Turk said the need for outages is determined by the CAISO, which operates the state's grid and balances energy demand with supply.

With so many people working and attending school from home during a statewide heat wave, the demand for energy—needed to run air conditioners and fans and computers—is high.

Rotating outages, which Turk said are dispersed across PG&E's service area and sequenced to minimize the amount of disruption for each customer, help to prevent larger blackouts on the grid.

But the potential power outages are concerning for schools, businesses, and local governmental bodies, which are largely operating online due to the COVID-19 pandemic.

Because the blackouts are scheduled to occur only after 3 p.m., when most K-12 schools are already out, it shouldn't have too drastic of an impact on K-12 schools. It's a different story for local governments, many which host meetings in the evening, and colleges, which have classes throughout the day and evening. Cal Poly spokesperson Matt Lazier said the university is keeping an eye on the weather forecasts and potential for blackouts.

"We have asked faculty to take the possibility of these outages into account; offer flexibility to students who are prevented from attending virtual course meetings or turning in assignments on time; and do their best to minimize potential disruptions to student learning that might result from the outages," Lazier wrote in an email to New Times. "These recommendations also will apply should additional rolling blackouts and/or Public Safety Power Shutoffs create the potential for outages in the future."

In response to news of the potential outages, Gov. Gavin Newsom signed an executive order aimed at freeing up some energy capacity on Aug. 17. Through the order, energy users and utilities will be allowed to temporarily use backup energy sources to relieve pressure on the grid during peak usage times. Newsom also sent a letter to the CAISO and other state energy agencies, demanding an investigation into service interruptions that occurred over the weekend and the energy agencies' failure to predict and mitigate them. Δ