Owners of the famed Pozo Saloon saw their hopes to establish a commercial cannabis farm on a Pozo family ranch dashed on April 6 when the San Luis Obispo County Board of Supervisors rejected the project. 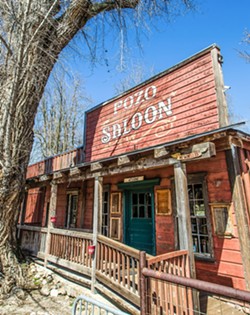 In a split 2-2 vote, the supervisors allowed a prior Planning Commission decision to deny the cannabis project stand. Fifth District Supervisor Debbie Arnold, whose family owns the winery neighboring the saloon, recused herself from the vote to avoid the appearance of a conflict of interest.

The April 6 hearing drew dozens of public comments—with many expressing support for the project and the Beanway family, which ran the saloon for decades, and others opposing it due to concerns about water supply, security, and neighborhood compatibility.

Levi Beanway, son of saloon owners Brian and Rhonda Beanway, shared in a public comment that both of his parents passed away last year. In addition to owning the saloon, the family had started a medical cannabis farm on their 59-acre ranch in 2004 to supply themselves and others treatment for cancer.

"After losing both my mother and father over the past six months, my commitment to preserve their legacy in the Pozo Valley, and dream of having this farm, has only grown stronger," Levi said.

But for several neighbors—and two supervisors—the tweaks didn't move the needle. Corey Brown, who said he resides "downstream" of the property, emphasized his concern about water supply.

"As of December, we've had to truck in water to our family residence to survive," Brown said. "The amount of water these facilities require becomes a huge issue for everybody living in the area around it."

First District Supervisor John Peschong, who made the motion to turn down the project, pointed to building code violations at the grow site in 2019 related to unpermitted electrical work. The violations were quickly remedied, county officials noted.

"You have four separate instances here," Peschong said. "To me, these are serious violations of county code."

In a statement to New Times, Reed called the board's decision to reject the project disappointing.

"Of course we are disappointed about the decision made yesterday," Reed said on April 7. "We presented a project that fit the cannabis ordinance completely, so the decision the Board of Supervisors made was based on other extenuating factors. We did everything we could to get the project approved, because we thought it was ideally situated and it required no variances from the cannabis ordinance. However, as Chairperson Compton stated at the meeting, sometimes that doesn't matter. Adherence to the ordinance is not always the driving factor in issuing or denying a permit. We are disappointed but we have to accept the outcome of the hearing, so we are closing this chapter in our lives and moving on." Δ