Higher Grounds Music Festival and House of Holistics present “The Harvest,” a multi-band hip-hop and reggae festival at Pozo Saloon (doors at noon; all ages; $35 to $125 available at pozosaloon.com).

The lineup is pretty stellar! You’re not going to let a chance of showers keep you from digging the sounds of Logic, E-40, Tribal Seeds, DJ Quik, Casey Veggies, Tomorrows Bad Seeds, SLO White, and Charlo Bates, are you?

Logic, the Maryland-based 26-year-old producer and rapper, got his start in 2009 with the release of Young, Broke & Infamous, a mixed tape that led to his being signed to Visionary Music Group. After a few more mixed tapes, Def Jam Recordings brought him into the studio to record Under Pressure in 2014, his first solo album. His follow-up, 2015’s The Incredible True Story, garnered critical praise and charting on Billboard.

Flamboyant Bay Area rapper E-40 is a real DIY success story, growing a regional fan base into a national one and using his homegrown record label, Sick Wid’ It Records, to grow the East Bay rap scene.

DJ Quik, a premier West Coast gangsta rap artist in the ’90s, got his start releasing mixed tapes in Compton in the ’80s. He ended up on Arista Records, where several of his albums reached gold sales. He’s also a prolific producer, working with artists such as 2nd II and Hi-C.

Tomorrows Bad Seeds out of Hermosa Beach is touring in support of their new single “War Letter,” a tribute to our military troops and the heartache they endure being away from loved ones while stationed overseas. The band mixes rock-pop, punk-reggae, and hip-hop. 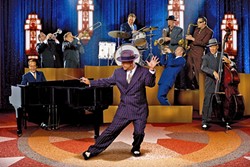 It all starts when Big Bad Voodoo Daddy plays Tooth & Nail Winery this Thursday, Oct. 13 (6:30 p.m.; 21-and-older; $35 presale at ticketfly.com or $40 at the door). This is the band’s 24th anniversary year, and they’ve toured continuously, playing around 150 shows a year of their retro jump blues and swing music. If you like Louis Jordan, Louis Prima, and LaVern Baker, this is right up your alley. This is a band that right in the middle of the grunge era proved it’s cool to swing!

Everyone’s talking about the Drive-By Truckers at the Fremont Theater this Friday, Oct. 14 (7 p.m.; all ages; $26 presale at ticketfly.com or $30 at the door). The alt-country and Southern rock act just released American Band, their studio 11th album, which once again spins out engaging narrative songs exploring the American experience. Their first single, “What it Means,” looks at recent events: “He was running down the street/ When they shot him in his tracks/ About the only thing agreed upon/ Is he ain’t coming back/ There won’t be any trial/ So the air it won’t be cleared/ There’s just two sides calling names/ Out of anger out of fear/ If you say it wasn’t racial/ When they shot him in his tracks/ Well I guess that means that you ain’t black/ It means that you ain’t black/ I mean Barack Obama won/ And you can choose where to eat/ But you don’t see too many white kids lying/ Bleeding on the street.” Potent stuff! Lydia Loveless opens.

The really big day, however, is Saturday, Oct. 15, when Good Medicine slipped four concerts in their music cannon and plans to fire them off almost all at once. The day begins with another free beach concert at Cayucos with rowdy Southwestern-tinged string band The Brothers Comatose, the harmony vocal sounds of The T-Sisters, and the Texas soul of Joe Koenig & The Homewreckers (noon to 5 p.m.; all ages; free).

And yes, also on Saturday, Oct. 15, Good Medicine & Numbskull present Wild Nothing at Sweet Springs Saloon (8 p.m.; 21-and-older; $13 presale at ticketfly.com or $15 at the door). Fronted by Jack Tatum of Jack and the Whale and Facepaint, he’s turned his attention to shimmering, synth-infused pop dreamscapes.

The season is winding down at Vina Robles Amphitheatre, but they’ve got a few more shows under their belts, including the I Love the ’90s Tour this Sunday, Oct. 16 (7 p.m.; all ages; $60 to $100 at vinaroblesamphitheatre.com). Expect a nostalgic night of your favorite hip-hop and R&B hits from the likes of Vanilla Ice, Kid ‘N Play, Color Me Badd, All-4-One, Tone Loc, and Young MC. Hear “Ice Ice Baby,” “Ain’t Gonna Hurt Nobody,” “I Swear,” and more! Is it too soon? You be the judge!

The SLO Jazz Festival’s 2016 Fall Fest continues this Saturday, Oct. 15, with a show by Zydeco Flames at Wild Horse Winery in Templeton (6 p.m.; all ages; $30 general admission at 2016fallfest.com).

This is the West Coast’s premiere Zydeco band, that delivers feel-good Louisiana Bayou sounds played on washboard and accordion. Visit the Fall Fest site for future concerts and ticket details. 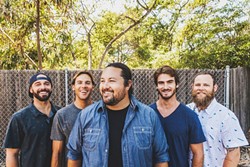 Chi McClean and Tim McNary play a Songwriters at Play concert at D’Anbino Cellars on Friday, Oct. 14 (7 p.m.; all ages; $12 tickets at 227-6800, Ext. 700). These two Nashville singer-songwriters are both touring machines. “Featured on many of our events over the past eight years, Chi McClean writes acoustic rock songs marked by a haunting Southern style,” promoters explained. “Singer-songwriter Tim McNary’s story is worthy of its own song. Born on the South Side of Chicago, he was raised in a strict evangelical environment without secular music, followed his wanderlust to tiny seaside towns in South America, sang in a Southern rock band along the eastern coast of the U.S., lived in his car in Atlanta, and eventually grew roots in Nashville.”

Award-winning singer-songwriter Jody Mulgrew returns to Steynberg Gallery on Saturday, Oct. 15 (7 p.m.; all ages; $20 at 547-0278). Trained at Morro Bay High School and Cuesta College, the singer has spread his wings, living everywhere from Nashville to LA, to San Diego, where he currently resides as he works on his sixth studio album. The newly married Mulgrew (Congratulations, bud! Welcome to the club!) delivers original tender ballads, soulful R&B, brilliant pop, and unique takes on select cover songs. In addition to winning the 2012 Abe Olman Award for Excellence in Songwriting by the Songwriters Hall of Fame in New York, his albums Rocket Ship and Let Them Talk won the 2011 and 2014 New Times Music Awards for “Best Album.”

Cuesta Choirs present the Fall Festival of Choirs at the Cuesta CPAC on Saturday, Oct. 15 (7:30 p.m.; all ages; $15 general admission at cpactickets.cuesta.edu). Featuring Cuesta Voce, the Chamber Singers, and the Concert Choir with special guest jazz artist David Scott (a master jazz singer and improviser from the Berklee School of Music in Boston), this promises to be a stirring evening of vocal jazz.

San Francisco rockers Hungry Skinny play the Frog and Peach on Wednesday, Oct. 19 (10 p.m.; 21-and-older; free). This is the band’s first show of their Fall 2016 tour that will take them through Southern California and into Nevada, Utah, Idaho, Oregon, and Washington. “It’s our first time playing in San Luis Obispo,” the band noted.