If you listen to Morning Cup on KCBX like I do every weekday morning, you’ve heard DJ Neal Losey play the heck out of Próxima Parada, a band formed at Cal Poly that became a multi award-winner at this past year’s New Times Music Awards thanks to songs from their debut album, Songs of Music.

This Saturday, Jan. 10, the quartet plays SLO Brew (7:30 p.m.; all ages; $12 presale or $15 at the door), with opening act Sparrows Gate. While on vacation in Palm Springs, I conducted an email interview with drummer Andy Olson, who filled me in on these rising stars’ plans.

New Times You’ve had a lot of exposure since your last album, from multiple awards at the NTMAs to tons of airplay on KCBX and elsewhere. My question is: how’s all of this affecting the band?

Próxima Parada We’ve definitely seen growth coinciding with the release of our album, the NTMAs, and radio play on various stations around town. Having an album has opened up some opportunities for us that we didn’t have before, and it also makes reaching out to new people and venues easier because we have a nicely packaged summary of our work. In the months leading up to our album release, we’d been very focused on outward development, trying to spread our music and get in front of new ears. Lately we’ve been spending a lot more time in our rehearsal space, playing with the metronome, writing new songs, and just jamming. I think this is a very healthy cycle for us, and it’s nice to be focused inwardly on musical development once again.

New Times You guys entered the NTMAs in the R&B category, but I don’t think I’d describe your music as R&B. In fact, I have a hard time fitting you into one genre. What do you think? Who are the touchstones? The inspiration?

Próxima Parada We actually entered the NTMAs in most of the categories. We really wanted to submit our album as a whole, but we didn’t have hard copies by the submission deadline. We ended up submitting the tracks individually—a few in each category. It’s easiest for us to classify our music that way. “Porch Stompin’” is a folk song. “Climb to Love” is a soul song, or maybe you could say it’s R&B. Our touchstones are wide ranging. Lately I’ve been listening to a lot of music from Brooklyn’s Daptone Records: Charles Bradley, Sharon Jones and the Dap Kings, the Budos Band, and Antibalas. We listen to a lot of world music. Tinariwen of Mali and Andy Palacio of Belize are two of my personal favorites. We all love the Wood Brothers, as well as classics like The Beatles, The Band, Bob Dylan, Ray Charles, and Bill Withers. We also listen to jazz. The album Earfood by the Roy Hargrove Quintet is constantly in our van’s CD player. So you can see why our own music is so varied.

New Times What sort of new material are you working on and what’s it like?

Próxima Parada We’re actually working on a lot of new material right now, which is very exciting! We’ll have a few new songs in our set for the SLO Brew concert on the 10th. We’ve been talking about recording and releasing a series of singles. The writing and recording process is such a great learning opportunity. We feel like we’re writing more proficiently now than we were before Songs of Music, and I hope that we would continue to improve with more writing and recording experience. Our new songs, like our published music, are varied. Some of them are soulful. One is inspired by some of our favorite world music. We hope to begin recording and releasing a few singles in the coming months.

New Times What are the band’s future plans? Are you trying to find label support, tour to a wider audience, what?

Próxima Parada The future is something we’ve been thinking about a lot right now. In the next year, we’d like to step into music full time and see what opportunities we can create. We’d love to hop on a tour with a more established band (talk about a learning experience). Working with a label isn’t necessarily something we are trying to pursue, but if an opportunity presented itself, we would consider it. We just want to keep making music because it brings a lot of people joy (including ourselves).

New Times What else should people to know?

Próxima Parada We’ll be performing at SLO Brew with one of our favorite bands in town, Sparrows Gate. We’re so thrilled to get back on that stage! It’s certainly our favorite place to play. We hope people who enjoy our music can spread the good word. We’re proud of our album, and we want to get it out to as many people as possible. Give the album to a friend and we’ll get you another copy, share a song on Spotify to someone, or be creative with it.

Also at SLO Brew this week, check out The Dustbowl Revival and The Tipsy Gypsies on Friday, Jan. 9 (7 p.m.; 21-and-older; $12 presale or $14 at the door). Venice, California-based Dustbowl Revival “merges old school bluegrass, gospel, pre-war blues, and the hot swing of New Orleans to form a spicy roots cocktail.” Check out some tunes on the Internet—they’re killer! The Tipsy Gypsies are SLO’s own Django Reinhardt-style Gypsy jazz outfit. This should be a very cool show.

Is there a little boy in America who hasn’t dreamed of being a cowboy? The idea of being out in wide open spaces, engaging in derring-do, sleeping under the stars, and being free to roam with your trusted horse is part and parcel of the Old West mystique, and nobody’s music embodies those dreams more than Dave Stamey, a former real-life cowboy turned traveling troubadour. Dave answered a few questions via email while I was on vacation.

New Times First, I’d love to hear about your recent album and awards and life on the road.

Dave Stamey Thanks so much for being interested. I am grateful! I’ve spent most of the last five years on the road full time. This last year (2014), the Western Music Association named me Entertainer of the Year for the seventh time. I’ve been awarded Male Performer of the Year six times, and Songwriter of the Year four times. True West Magazine named me best solo Western musician in 2010, 2012, 2013, and 2014. Blah, blah, blah … so much for that stuff. Just went into the studio to start work on my 10th album. All original music, great crew including the great Dorian Michael and Ken Hustad, and I still do all of my recording at Rick Sutton’s studio in Atascadero. He takes good care of me. 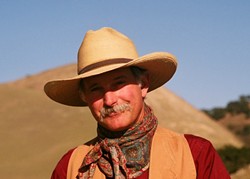 Dave Stamey I’ve moved to the farthest northeast corner of Tulare County on a little piece of horse property we bought 10 years ago. (Couldn’t afford to buy what I wanted on the Central Coast!)

New Times Are you still doing some cowboying, or are you strictly music these days?

Dave Stamey I’ve given up cowboying and horse wrangling to do this full time. It just got too busy, and trying to do both was making me crazy.

New Times What to you attest to the enduring popularity of this music?

Dave Stamey As far as the popularity of the music, I can’t speak to that except to say that people like stories, and that’s what I try to do. Also, I go to where the people are, out of the way places like Burns, Ore., and Lavina, Mont., and Encampment, Wyo.—places where the folks like the fact that I’m telling their stories, and they will come out to support that. I’ve made many, many friends out there in the hinterlands, and I make big circles every year to return and see them again and play for them. I’m a very fortunate man. Sounds like a huge commercial, doesn’t it?

Dave Stamey It’s been probably seven or eight years since I played at Coalesce (the late Steve See produced the last couple of shows there for me), and I’ve wanted to get back there for several years. Other jobs interfered, would have conflicted with it. I love the intimacy of the place.  Again, it will be like coming back and seeing old friends.

Come on down and settle in for an evening of great cowboy music that celebrates the Old West! 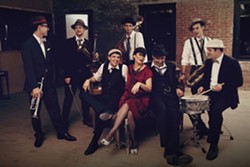 Sometimes a band’s bio says it better than I ever could: “It’s a great American success story worthy of the cinema: A born-and-bred New York City actor meets a Parisian-born writer at an open jazz jam above a noodle shop in Manhattan and before you could say ‘Bourbon Street Parade,’ The Hot Sardines were bringing their contagious brand of joy to audiences all over the world.” The Dixieland act plays Wednesday, Jan. 14, at Cal Poly’s Spanos Theatre (7:30 p.m.; all ages; $36 to $45; phone 756-4849).