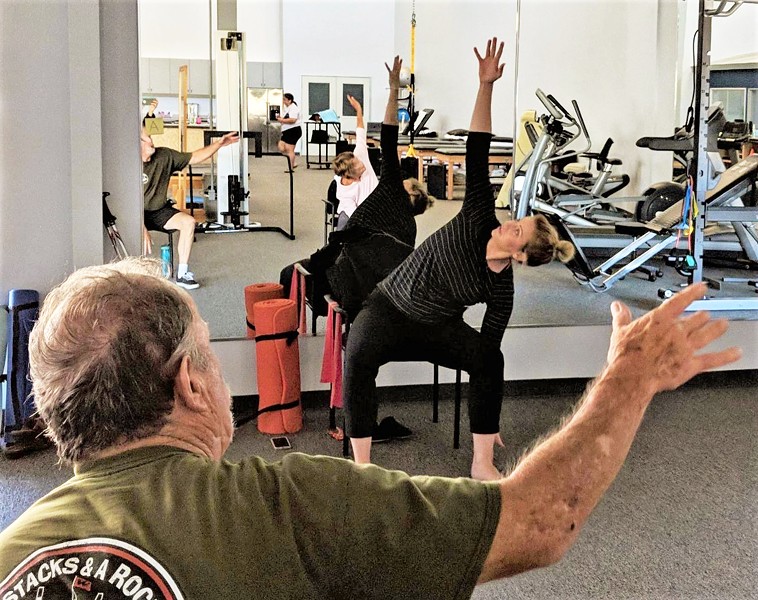 A new physical therapy practice recently opened in San Luis Obispo, and in addition to touting a 48-hour appointment guarantee, it's offering affordable twice-a-week classes for the underserved Parkinson's community.

But Precision also extends its physical therapy services to a community that's often lacking them. Every Tuesday and Thursday, from noon to 1 p.m., Carless hosts an exercise class dedicated to helping locals suffering from Parkinson's disease. Carless is a certified Parkinson's Wellness Recovery (PWR) therapist, having previously worked with patients of Central Coast Home Health.

"I got pretty involved in the Parkinson's community through that," Carless said. "I saw a huge lack of resources for our individuals with Parkinson's disease."

Parkinson's is a progressive disease, a disorder of the nervous system that impacts movement. Carless explained that consistent exercise is critical for those who have it, to help slow its progression in combination with medication.

"It's kind of a big deal," she said. "What the research shows is a combination of medicine and exercise helps slow the progression."

Called PWR! Moves, the classes provide a "flexible and functional exercise plan" for each pupil, with a "focus on posture and high effort, meant to assist in mobility."

"You want that high-intensity exercise," Carless explained. "It just gets them stronger, better posture, and better quality of movement.

"It's just a good workout," she continued, adding with a laugh, "I do it myself and get really sore."

The classes are open to anyone in the Parkinson's community, as well as their family members and friends. Each hour class is $15 per person or $20 for two people.

Carless noted that it's important for Parkinson's patients to engage in exercise regularly, not just occasionally.

"It's not really enough to do it once a month," she said. "It's something that needs to be consistently happening twice a week."

Carless and Svetich bring a combined 37 years of practicing experience to Precision Physical Therapy. As a policy, they decided to adopt a 48-hour guarantee—promising patients an appointment within 48 hours of their first call.

"Typically what we were finding in SLO and in the Central Coast in general is there's quite a long waitlist to get into other facilities," Carless said. "We really thought that was a detriment to our population. If someone needs surgery and needs to be seen, they probably shouldn't be waiting for three weeks."

The business's grand opening event is slated for Nov. 21, which will act as a fundraiser for local nonprofits and sports teams.

"It's a fun atmosphere," Carless said about her startup. "We like to help people get better."

For more information on Precision Physical Therapy and its PWR classes, reach them by phone at (805) 439-3900.

• Community members collectively donated more than $41,000 to the 5Cities Homeless Coalition (5CHC) as part of its annual Empty Bowls Community Luncheon in October. The event included dozens of local businesses and nonprofits as contributors and sponsors. The donations assist 5CHC in its mission to fight homelessness in SLO County.

• Coastal Valley Academy, a residential treatment program in San Luis Obispo County Juvenile Hall, recently received a 2019 Challenge Award by the California State Association of Counties for its "innovative and regional approach." The academy, which combines the intensive treatment of a group home with the structure of a camp program, has reduced first-time group home placements by 91 percent and reduced the risk of recidivism by 44 percent, according to the county. Δ