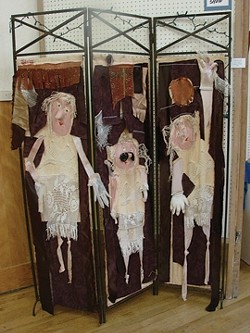 New Times How did you get involved with the Prefix 927 Art Show?

Carolyn Berney, artist This is my 13th year I have entered. I started without knowing what it was about, and when I went to my first show I was just amazed at the diversity. Anything goes in this show. Art [Van Ryhn] started the show to show art that was outside of the traditional medium—non-traditional work—and that was my thing.

New Times How is your art non-traditional?

New Times That might be kind of intimidating, no?

Berney It is! And it really gets you thinking, which is the quirky way I think anyway. But that is why I fit into the show so well, because that is what I do—stuff that no one else has done, like my masks from a previous show.

New Times How do you make your art one of a kind?

Berney Because you think of something to use that no one else has used in that way. In the last two years I have tried to recycle things. Last year I used plastic bags from the grocery store. I made hats, flowers, and everything was made out of those colorful bags I collected over time. This year I am recycling teabags. I am sure nobody has made art out of teabags.

New Times Tell me about the Prefix 927 Art Show and what happens over the two days.

Berney The art is set up on Friday and judged, and three top winners are picked. Those are cash prizes. The next day, the show is open to the public. There is a reception on Saturday night at 7 p.m. where the awards are given out. I will attend the reception.

Berney The titles are just as important as the piece itself. Often the title is thought of first. Something with a double meaning, a political twist, or any play on words will inspire the artist. The art is not complete without a catchy title. Example: Two miniature train tracks side by side with a figure of a man glued to the one on the right titled, He’s on the Right Track. It wouldn’t mean anything if you didn’t know the title.

New Times How is the Prefix 927 Art Show different from other art shows?

Tish Rogers, artist and event organizer This show allows the artists to be offbeat. Most of the pieces are tongue in cheek. One year someone did a rusty hubcap and called it “Rusty Limbaugh.”… The works are politically motivated, or a play on words. They are fun.

New Times How many artists participate?

Rogers Usually around 80 with some artists submitting more than one. We accept entries up until the day of the show.

New Times Do the artists have to live in Cambria? [Hence the title of the show—927 is the phone prefix in the Cambria area.]

Rogers That is the only criterion but we aren’t sticklers. We give lots of prizes, donated by local merchants.

Rogers It’s in its 21st year. The idea of the show is to have fun and be outlandishly creative. People should stop by and have a good time.