The San Luis Obispo Police Department confirmed that a body found during a large-scale search of Prefumo Canyon is that of 26-year-old Kristen Marti.

In an April 2 press release, the department said that an autopsy had been conducted, but officials declined to give a cause of death, stating that the investigation was still ongoing. 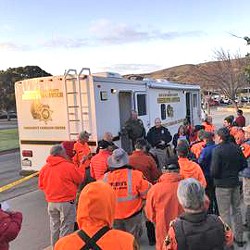 "Investigators have been in close contact with the Marti family throughout this investigation," the department's release stated.

Marti, a SLO resident, was reported missing on Jan. 18. Police said she was last seen on Jan. 9 in the 1800 block of Prefumo Canyon Road. On March 25, SLO police and members of other law enforcement agencies conducted a search of the canyon, where a K-9 search and rescue team found a body, later identified as Marti's, in a creek near the roadway.

Shortly after the body was discovered, investigators confirmed that they were investigating Marti's case as a homicide. As of April 4, the department has not announced any arrests in Marti's case. Police previously said they had identified a person of interest in the case but did not release his identity.