A San Luis Obispo residential group concerned about the speed of development and a lack of infrastructure to support it filed a lawsuit against the city challenging its recent approval of Froom Ranch, a mixed-use project proposing hundreds of new units near Los Osos Valley Road.

The group, Preserve the SLO Life, and two nearby homeowners' associations are claiming the city gave the project the green light without an adequate plan to mitigate its environmental impacts, including traffic impacts and violating the California Environmental Quality Act.

"Their so-called solutions to unavoidable impacts are no solutions at all," said Kathy Borland, a local resident and Preserve the SLO Life member. "The residents who've lived here for so long, we're not opposed to growth. But it needs to be growth done in a sustainable way and done slowly and with the appropriate infrastructure in place as you go."

It's the second time that Preserve the SLO Life has sued the city over a large development, and for similar reasons. In 2018, the group won a $678,000 settlement to add more traffic and noise improvements near the incoming Avila Ranch, a 720-home project that's currently under construction near Buckley Road.

But Borland said that those and other mitigation measures have been insufficient, and residents' concerns and requests are ignored when raised during the public review process.

"We're nowhere," Borland said of their progress working with the city. "They don't understand any other language but a lawsuit, and that's really sad. We want the city to respect the public's input. We have very valid concerns."

The Froom Ranch project involves 43.5 acres of development at the southwest edge of town, including 404 units of senior housing, 174 multifamily residential units, and up to 100,00 square feet of commercial uses. 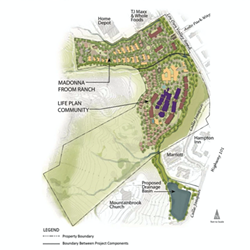 Traffic is one of the four "unavoidable and significant" environmental impacts, as it will "exacerbate" peak hour traffic and cause "poor levels of service" for cars, pedestrians, and bikes, according to an environmental impact report (EIR). Other impacts are to air quality and greenhouse gas emissions, biological resources, and aesthetics and visual resources.

SLO proposes new traffic lights, lanes, and other improvements to handle the traffic—including a Highway 101 overpass planned at Prado Road—but the timeline for those projects, whether they're in sync with the project construction, and their overall effectiveness is in question, Borland said.

The city named several overriding considerations in its approval, like more housing, jobs, and tax revenue. In a statement to New Times, City Attorney Christine Dietrick said she's confident the project review process "resulted in an approval that is consistent with both legal requirements and community values." Δ