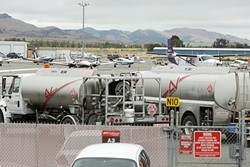 “It is a pretty big deal,” said Richard Howell, general manager of the San Luis Obispo airport. He said the rule essentially means that anyone who goes past the airport’s fence has to have a badge or an escort.

“There are some folks that really think it’s onerous and overburdensome,” he said. “But then there’s other folks thinking, ‘Well gee, my high-dollar aircraft is going to be a little more secure now.’”

The new requirement applies to pilots who own or rent hangars, visiting pilots who are unescorted, and employees of pilots, such as mechanics or maintenance help.

Under the directive, commercial-based airports, which include San Luis Obispo and the Santa Maria Public Airport but not Paso Robles’ airport, will be required to collect and verify identifying documentation for people with unescorted access. Airports then must forward that information to the TSA, which will assess potential security threats against the consolidated federal watch list, as well as run a right-to-work immigration check. Local airports would be required to store the data.

Some pilots, however, believe the directive flies over the line and smothers civil liberties.

Kevin Page, a pilot who rents a hangar at the Santa Maria Public Airport, said pilots are a tight, self-policing community. Any strange activity, he argues, would be called out by the pilots themselves. He said public airports are there for the benefit of the public and shouldn’t be subjected to extensive security measures when there are already security measures in place.

“It is a tremendous service to the community, and to lock it up and to treat pilots as if they are suspects without probable cause is severely wrong, and I believe it goes against the spirit of the Constitution, at best,” he said.

Pilot Grace McGuire said pilots have already provided much of the information requested under a new badge requirement, so carrying that redundant information around on a badge that can be lost can actually enhance a terrorist threat.

“An aviator’s identity is valuable,” McGuire said. “And we’re just going to hand over all of this information? Can you imagine if it got into the wrong hands?”

In San Luis, officials said they’ve heard similar concerns. “We’ve had some people who’ve said, ‘This is ridiculous,’ and ‘Why are you making us do this?’” Howell said, adding that others have complained about increased fees associated with the changes.

SD-8F itself is considered sensitive and so doesn’t have to go through a process open to public scrutiny under authority granted to the TSA. When New Times asked for access to the text of the security directive, Baird replied that it is unavailable because of its security-sensitive nature.

In San Luis, about half of the people affected have already undergone new training and background checks, Howell said.

“We haven’t identified any bad guys,” he noted.