One week in, how did SLO's own occupy Wall Street attempt go over?

On Oct. 20, the Occupy San Luis Obispo camp on the courthouse lawn was less than a day old. 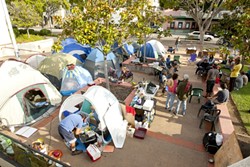 But even at the half-day mark, the occupiers were drawing a crowd. A woman in a business suit stepped onto the grass to get a better look at one of the dozens of signs hanging around camp. She asked a few questions before making her way down the courthouse steps and into the building.

Are people from the county OK with occupiers being here?

“Oh yeah,” Kastner said. “Everyone has been great: the police, the mayor.”

A woman looking to borrow a cell phone to call for a ride interjected. Without missing a beat, Kastner handed her his iPhone and continued with his story: “Everyone has been so great. Someone is bringing by an iPad tonight so we can show people a few websites and get them familiar with the movement.”

Welcome to the protests of the 21st century.

From its beginning, the Occupy SLO encampment has differed greatly from parallel movements in places like Los Angeles and San Diego, mainly in the reaction it’s received.

“The cops have given us their support, and the courthouse has said we can be here as a form of protest,” 21-year-old Sherilyn Munroe said.

While sit-in protesters in the major cities were facing off with angry property owners and police crackdowns, the Occupy SLO campers were mainly worried about keeping things clean.

“I’m kind of in charge of keeping the recycling separated, picking up any cigarette butts that hopefully aren’t from us, and we’ve been switching around the tents to keep the grass from dying,” Munroe said.

Some people have wondered why Occupy SLO chose to set up in front of the courthouse as opposed to the Merrill Lynch down the street or the nearby Bank of America.

“It’s centrally located,” Kastner said of their courthouse camp, “and we’ve been making trips down to the gas stations and banks. We just wanted to be in a place that was going to allow us to stay indefinitely.”

Judging from the group’s donation request list (which includes toilet paper and guitar strings), it seemed everyone was preparing to stay for the long haul.

Desiré Gallo, a 30-year-old full-time student and part-time worker for the financial aid office at Cuesta College, has seen her share of downtrodden young people.

“In the general sense, we want social and economic justice for everyone,” she said. “Specifically, this needs to be done through changing the tax codes, relief from student debt, and we need to repeal the Citizens United vs. Federal Election Commission decision, if only by constitutional amendment. We are a nonpartisan movement trying to secure fair and balanced tax reform. Most importantly, we are trying to get people to see that corporations are now deemed people, and this country is no longer running a democracy. We have people here from Greenpeace, progressives, Democrats, and even a few people from the Tea Party, and they all want to see a change.”

The mention of political parties caught the attention of Andrew Boston, 23, who came over to introduce himself.

“I’m an economist, and I’m here occupying the Occupy Wall Street movement as a Libertarian for Ron Paul,” he said, his words, in turn, catching the attention of occupiers nearby. “We shouldn’t be demonizing Wall Street for using a system we’ve made too easy for them to take advantage of. To understand what ails a country, we need to get into a philosophical discussion of currency and monetary policy.”

By Oct. 24, the camp had shifted from a fledgling but promising social movement to a makeshift transient camp.

Austin Perlak, a 20-year-old transient, used a camp stove to make breakfast. When asked what had changed, he said, “People are starting to build infrastructures, and there are definitely more people, probably 20 really dedicated protesters.”

“They put me on security detail the last three nights,” he said. “I was out here when some guy got his arm broken last night.”

“I’ve gotten to know the homeless individuals in our group, and I trust them,” said Michelle Call, who came to join the occupation because her husband, a professor at Cal Poly, hasn’t received a raise in six years. “I’ve been taking away food, cooking it at home, and bringing it back. But this is not a homeless camp. If they are here as part of the movement, that is terrific, but we are not here to look after them.”

She admitted quietly that she’d done more than just cooking: “I’ve brought a few people home with me to let them use the shower, and we do some laundry.”

Yet Call was really there to protest what happened to her husband.

“After they were furloughed last year, we went upside down on our mortgage,” she said. “We don’t live extravagantly, but it’s still extremely hard.”

Her father was vice president of a bank 20 years ago. She said she’s never seen things this bad: “Even 20 years ago, I didn’t feel this way about banks and corporations. It’s astounding how quickly it’s changed. I don’t mind wealth; I just don’t like it when wealth buys people. I have a sign that I carry that says, ‘What’s your problem?’ and it just lists all the different ways people have been wronged by our society the last few years.”

As of press time, Occupy SLO’s life was drawing to an end. On Oct. 25, Evan Sylvester, who heads the Occupy SLO steering committee, said the movement was withdrawing its efforts from the encampment.

“The encampment was not decided by group consensus, and we are now withdrawing our energy and resources to regroup and return with a more cohesive effort.”

Even so, the camp was still there.

Maeva Considine is an intern at New Times. She can be reached via Managing Editor Ashley Schwellenbach at aschwellenbach@newtimesslo.com.