Kale--a leafy, green vegetable that shares an ancestry with cabbage—is now exceeding its expectations of simply holding nutritional value. This high-vitamin produce is being used to promote the rights of individuals by helping the fight for same-sex marriages.

Bambu Batu, a local business that specializes in bamboo products, is selling shirts that say, “KALE: it’s what’s for dinner.” Five dollars will be donated to Marriage Equality USA whenever one of these health-promoting shirts is sold. 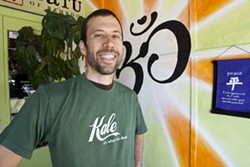 The correlation between broccoli’s cousin and gay marriage rights may appear hazy at best. But Bambu Batu’s shirts stem from a legal wrestle between Chick-fil-A, a national food chain, and an independent shirt maker in Vermont named Bo Muller-Moore.

Muller-Moore printed shirts with the slogan “Eat More Kale” and Chick-fil-A representatives found the slogan to be a direct copyright infringement of their slogan “Eat mor chikin.” Muller-Moore didn’t comply with Chick-fil-A’s demands to end his veggie-promoting shirts, stirring a legal battle between the fast food corporation and the kale-lover.

This story caught Bambu Batu’s attention, leading owner Fred Hornaday to believe it was a bad case of corporate bullying. The final push for Hornaday came when Chick-fil-A received media attention for donating millions of dollars to organizations fighting same-sex marriage. He decided to take action.

“There were many protests against them, and we started to ask the question, ‘How can we make this more positive?’ And that’s when we thought about the shirts,” Hornaday said.

Incorporating Muller-Moore’s original idea of kale, Hornaday came up with the slogan “KALE: it’s what’s for dinner.” With the different types of kale—such as Siberian, red Russian, and the commonly known curly, which can all be prepared in a variety of ways—Hornaday felt that the popular veggie-promoting T-shirts would be accepted well.

The response has been overwhelmingly positive, he said, and the first batch of shirts was gone within the week.

The leafy goodness is being used by Hornaday to help others live how they choose. He doesn’t see why a major corporation needs to intervene in such a personal issue.

“The fact that they’re doing that with their money to denote the civil rights of others, I just don’t agree with that,” Hornaday said. “Why would you want to get in the way of that when they want to be with someone for the rest of their life?”

Bambu Batu has been open for seven years under Hornaday, who sells a variety of bamboo-inspired products, ranging from kitchenware to clothing. Hornaday describes his store has being “at peace with yourself and in harmony with nature.”

Bambu Batu is at 1023 Broad St. in San Luis Obispo. Call 788-0806. “KALE: it’s what’s for dinner” shirts are sold in the store and at bambubatu.com for $29.95. The shirts are produced from 70 percent bamboo and 30 percent organic cotton and are available in green or red.

SLO GranFondo is a cycling race through San Luis Obispo on Oct. 20. Participants have the opportunity to choose from four races that range from 25 to 100 miles. A new addition to the event is “Ride for a Cause,” which allows non-riders to raise money for the nonprofit organizations involved. The race starts and finishes at Mission Plaza. Upon crossing the finish line, riders have the opportunity to enjoy live music, a vendor exhibition, food, and beer. People can donate or sign up for the event at slogranfondo. com; there’s a $125 registration fee. Proceeds from the event benefit the Hearst Cancer Resource Center at French Hospital Medical Center and Alpha Pregnancy and Support Services.