The Hip Hop Nutcracker will have one show in SLO, at the San Luis Obispo Performing Arts Center on Nov. 10. Tickets are available through the Cal Poly Ticket Office (tickets.calpoly.edu). More information about the production can be found at hiphopnutcracker.com.

Editor's note: This article has been edited to correct that Kurtis Blow is not a producer on the show.

Often regarded as the father of recorded rap, Kurtis Blow's name speaks for itself, especially among those of the so-called "hip-hop generation." But what is the iconic figure behind the game-changing 1979 track, "Christmas Rappin,'" up to this holiday season?

Since 2014, Blow has performed with a holiday production that tours across the country with close to 50 shows a year. It's called The Hip Hop Nutcracker, and it's coming to the San Luis Obispo Performing Arts Center on Nov. 10.

With an opening set by the legend himself, The Hip Hop Nutcracker is a rap show, a dance performance, and a rendition of a centuries-old storyline all at once.

"You have this classic, and then you flip it into a modern piece that's using break dancing instead of ballet," Blow told New Times. "It's awesome to see break dancing to classical music: a DJ playing funky beats with classical music playing on top. ... It's a fusion."

Blow calls the production "a family show," meant for all audiences.

"It is awesome to see the audiences that come out, all three generations: grandfathers, fathers, and children," he said. "All ages, all nationalities: Everyone can come out."

Blow acts as the master of ceremonies for the show and plays a short rap set at the beginning to get the audience hyped up.

"As the MC and host I set the pace for what is going to happen," Blow said. "We get ready to throw our hands in the air and party like we just don't care. ... We tell [the audience], 'Look, we want you to let your hair down and have a great time ... make a lot of noise when you want to. Scream at the bad guy.' We set the pace, we set the tone, and we create the atmosphere."

Blow ends his opening set with a track called "New Year's Eve," which provides a fitting transition into the classic love story that begins on New Year's Eve.

"I think that song 'New Year's Eve' at the end, with everybody counting down from 10 to one, that's the loudest response of the night," Blow said. "The intro will get you there and make way for what you're about to see."

What follows Blow's opener is not only a contemporary reimagination of the 1892 ballet set to Pyotr Ilyich Tchaikovsky's timeless score; it is culture in the making that "has changed the face of music," Blow said.

"When you have a DJ perform some music, it's usually some unique and awesome sound ... especially hip-hop, because the beats are so dynamic and funky," Blow said. "Then you mix that with the dance, and it's something you can't beat. It's the epitome of culture. You have these two different cultures from the 19th century to the 21st century, and you're fusing them together as a combination of the two. ... That's what culture is all about." 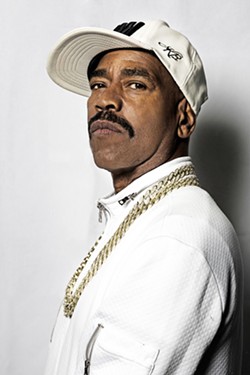 The concepts behind The Hip Hop Nutcracker are in many ways reminiscent of the wildly successful Broadway play Hamilton: a re-telling of history using elements of hip-hop and rap. Finding ways to reimagine old stories or narratives using contemporary ingredients can help bring those stories back into relevancy, especially for audiences craving something new, uncharted, and unconventional.

"I thought it was very, very successful," Blow said of Hamilton. "I would like to see some more plays that have that combination, that are using hip-hop to communicate the story."

On the flip side, productions like Hamilton or The Hip Hop Nutcracker can also serve as an access point for audiences who haven't yet experienced hip-hop, an art form that might be perceived as at-odds with something as antiquated and historically Eurocentric as Tchaikovsky's The Nutcracker.

"Dig the concept," Blow said when asked how audiences unfamiliar with hip-hop should approach the show. "We are playing the best theaters around the country. It's an incredible event that is for everyone. The time of year is the holiday season, so everyone is feeling good inside. ... These two young people fall in love, and their love creates a magic that defeats evil. It's a fun story, and I think everyone will be entertained and feel good inside after coming out to The Hip Hop Nutcracker."

Despite how much hip-hop has changed since Blow made his first mark on music history in 1979, the rapper says that he appreciates contemporary hip-hop and that the constantly shifting nature of this genre is one of its defining features.

"I love all music, even the new hip-hop trap sound that's predominantly on the radio today," Blow said. "There is a balance, and maybe we need more conscious rap to get out there on the radio. ... But there's some incredible talent that's out there today, and that's hip-hop. I'm praying for everyone to be successful. Hopefully, hip-hop can save your life like it did mine." Δ