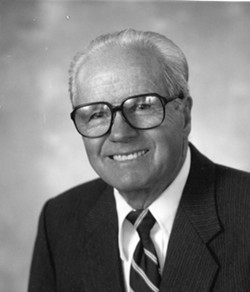 Ernie Righetti, an agricultural pioneer born and raised on the family’s Edna Valley ranch, died Jan. 26 at the age of 97.

When he was born in the early 1900s, the Righettis raised dairy cattle on their ranch, eventually transitioning to beef cattle. After his father died in 1963, Righetti took over the operation, eventually becoming one of the first area farmers to plant avocados for commercial production. The ranch now has avocado orchards that span 200 acres; the Righettis also raise wine grapes and cattle.

Righetti was a longtime board member of the San Luis Obispo County Farm Bureau Federation, serving as president from 1975 to ’77.

In 1991, the organization named Righetti Agriculturalist of the Year, and in 2006, the California Farm Bureau Federation awarded him the Distinguished Service Award.

Joy Fitzhugh, legislative analyst for the SLO County Farm Bureau, hailed Righetti as a champion of agriculture in the area as well as a skilled bulldozer operator, recalling that he helped restore part of Highway 46 West near her ranch.

“Ernie was a fabulous member of the agricultural community and our farm bureau. His dedication is incomparable,” Fitzhugh said, adding that after Righetti stepped down from the board, they named him an emeritus board member.

Righetti is survived by his wife, four sons—three of whom are involved in the farming operation—and several grandchildren.