Lawrence “Lenny” Jones, 63—Arroyo Grande’s 2015 Citizen of the Year, a longtime local real estate agent, and a prominent South County volunteer—was arrested on the evening of April 13 on suspicion of molesting two girls under the age of 14 at his A.G. home.

Jones was arrested on suspicion of kidnapping, child molestation, and penetration with a foreign object. Though he remained in custody at San Luis Obispo County jail as of press time on April 15, no official charges had yet been filed by the District Attorney’s office, and an investigation by the SLO County Sheriff’s Office was ongoing. 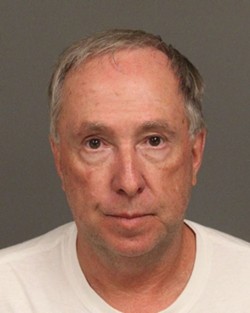 Sheriff’s Office spokesman Tony Cipolla told New Times that, around the time of a March 24 birthday party at Jones’ home, his office received information that a child molestation incident had taken place at the party. Jones’ April 13 arrest was the result of a multi-week investigation, Cipolla said.

“Right now, we are looking to see if the public has any more information on any other potential victims,” Cipolla said. “We’re still in the investigatory process, and possible additional charges are pending.”

Jones has been involved with many different charitable and community organizations, including Woods Humane Society, the Arroyo Grande/Grover Beach Chamber of Commerce, the Arroyo Grande Rotary Club, and the Pismo Coast Association of Realtors.

Jill Tucker, the executive director of Woods Humane Society, told New Times that Jones had abruptly resigned from the organization’s board (of which he had been president) in March.

“We were truly shocked and saddened to hear about this on Tuesday,” Tucker said. “He gave no explanation for his resignation, and he’s no longer affiliated with us.”

Judith Bean, president and CEO of the A.G./Grover Beach Chamber of Commerce (which bestows the Citizen of the Year honor), said that “nothing like this” has happened in the 55-year history of the organization.

“He hasn’t been convicted, so it would be premature for us to take any sort of action,” Bean said. “We can’t vote on what we don’t know, and all we know for sure is Lenny’s long record of community service. The award is in place to honor exemplary community service.”

Jones received the award in early 2015, and he also served on the Chamber of Commerce board for many years.

“We are certainly keeping a close eye on the situation going forward,” Bean said. “It’s just not a happy situation for anybody.”

Anyone with further information is asked to call the Sheriff’s Office at 781-4500.

UPDATE: After New Times press time on April 15, the District Attorney's office announced in a press release that they'd officially charged Jones with four felonies and two misdemeanors based on his alleged "conduct previously reported." The charges filed against Jones allege felony oral copulation or sexual penetration with a child under 10 years of age, felony kidnapping for the purpose of child molestation, felony lewd acts with a child under 14 years of age, felony "using a minor for sex acts," and misdemeanor charges for "annoying or molesting a child" and destruction of evidence. Jones is currently slated to be arraigned on those charges in SLO Superior Court on the morning of April 16.