When Susana López reflected on the March 23 Paso Robles Joint Unified School District board meeting, she said it was painful for many reasons.

That evening, an ethnic studies course—"Ethnic Studies: Multicultural America"—was proposed as an elective for Paso Robles High School students in the fall. Community members and students submitted emails ahead of the meeting and spoke during public comment in support of the proposed course.

Ahead of the meeting, board member Dorian Baker called the proposed course "poison" in a now-deleted Facebook post on her personal page. During the meeting, board member Lance Gannon said he was concerned that "students who elect to take this class are going to look at the white students differently." The board approved the ethnic studies course, but amended the curriculum to ensure it was "balanced" and reviewed the course at its April 13 meeting, where it made additional amendments and limited the course to 11th and 12th graders. The board ultimately approved the course as a one-year pilot. (Read more about the meeting on page 4.)

"I really felt as a person of color, a Latina, hearing [the board] really focus on the ethnocentric piece of it and how important it was to make sure that white people were not seen as bad. Or the focus on 'balance' because it didn't include enough white experiences when we know the white experience is the default in our curriculum and it is the default in the United States was difficult," López said.

Although everyone knew it was going to be a difficult task, López said she didn't expect the board of trustees to interpret the proposed course as "anti-white."

"This is a course that is trying to represent the diversity that exists on their campuses," López said. 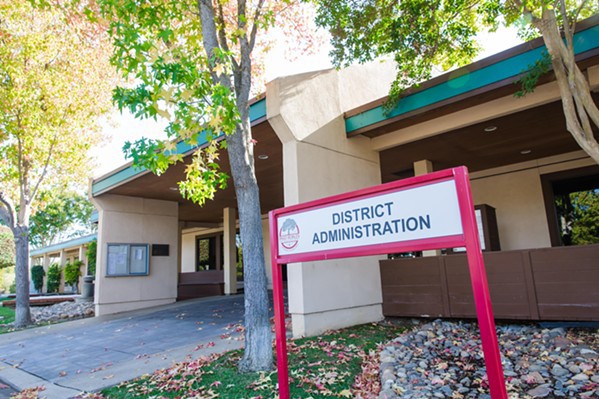 López is a licensed clinical psychologist, co-founder of the Resilience Psychologist Collaborative, a lecturer at Cal Poly, and a Paso Robles High School alumna. She calls herself a Bearcat, after the school mascot.

In June 2020, she added co-chair of the Paso Diversity, Equity, and Inclusion (DEI) Committee to that list of roles. The committee—made up of 12 community members, alumni, students, and Paso Robles Joint Unified faculty and admin—is a subset of the city of Paso Robles' diversity task force.

Established specifically for Paso Robles High School students who said they had experienced racism and microaggression on campus, López said the committee surveyed teachers about racism on campus and created a video in which students of color talked about those experiences and how it impacted them. With that information, DEI concluded that racism is an issue. Its next step was to figure out how to support its students.

"As an educator myself, I see the benefit of teaching students about different cultures, different groups of people, and really increasing their empathy with one another," she said.

López and the other DEI members believed if all students understood their cultural histories and how those are woven into the country's fabric, maybe the course could also help heal the racial tensions.

Paso Robles High School social studies teacher Geoffrey Land kept those intentions in mind as he helped create the ethnic studies course curriculum, which he will teach, if approved.

It took three months to vet the course, looking at ethnic studies curricula across the state and having the contents reviewed by his department, administration, and a curriculum review committee. His initial course proposal, Land said, would have enhanced students' appreciation of the lived experiences of African, Native, Asian, and Latino Americans.

"But also the nature of marginalization, how certain groups have been excluded from the American dream or how they've faced barriers and how they've responded to those barriers with resilience, agency, creativity, and courage," he said.

"I would hope to reveal the complexity of American experiences and tell stories that haven't been included in either literature or history classes," he said. "The hope was that students of Paso High would be able to perhaps for the first time see themselves in the curriculum in a way that would be empowering and inspiring, encourage them to learn more, feel better about their own story, and more courageous about their own journey."

In the early '90s, an Asian American English teacher started an ethnic studies course in literature to expose students to writings outside of the dominant paradigm of mostly white European authors. When she left the school, Stan Cooper reintroduced the course with an emphasis on social science and taught it for 10 years before he retired.

During Land's 22-year career with the high school, he said he's learned of and witnessed various racist incidents.

In 2017, high school students participated in A Day Without Immigrants, the nationwide protest and boycott to demonstrate the importance of immigration and protest former President Donald Trump's plans to build a border wall and potentially deport millions of undocumented immigrants. Land said some community members called for the students who participated to be expelled, and he was investigated because students made protest signs in his classroom.

"These are demographic growing pains that many communities experience. We like to believe that everyone is open, welcoming, empathetic, and wants to know their neighbors better, but that's not always the case. We've seen that at the high school, which is just a microcosm of the community," he said.

He rewrote the curriculum at the board's behest. Land said he believes the elected board sees itself as representing the community of Paso.

Paso High junior Mel Gonzalez said that she doesn't feel board members represent the student body or want to listen to students.

Gonzalez played on the high school's softball team with three other Mexican American students, and the rest of the girls were white. During practice, the team would listen to music, and the girls took turns choosing songs. Many were country music, and Gonalez's teammate wanted to play cumbia—a Latin America music genre.

"It didn't have too many words in Spanish, cumbia is more instrumental, but one of my teammates said, 'Oh, we're in America. We should be speaking English, so I don't think you should be playing that music,'" Gonzalez said.

Stunned and annoyed, Gonzalez said she and her other Mexican teammates sat down with the girl and told her she really shouldn't say things like that, especially to her friends.

Her former teammate demonstrated the same "close-mindedness," Gonzalez said, that the board demonstrated on March 23. Gonzalez felt the board walked into the meeting with preconceived ideas without listening to what public commenters like herself had to say.

"I remain Pollyannish perhaps about this," he said. "But I hope what comes out of this is a broader consensus on not what everybody wanted—but a consensus that people can rally around."

Dubost believes the board didn't overstep during that March meeting and applauds the teachers and students who rallied behind the course. He added that he supported the curriculum as it was constructed.

New Times reached out to school board members, and trustee Chris Arend cited the Brown Act as a reason not to comment. He urged fellow board members to consider Brown Act implications before responding. Δ