It's a picture perfect day in this slice of the Nipomo Dunes, where rolling hills of shrub-peppered sand run directly into the misty ocean, creating a coastline habitat perfect for a number of endangered and rare species.

This seems like the ideal spot to get outside and enjoy nature, but there aren't tourists or Central Coast residents out here hiking or sightseeing. Instead, monitoring and recovery wells dot the landscape, dust fences stand in rows, workers maneuver in hardhats and vests, and an intertwining system of narrow roads leads to scattered excavation sites, where graded sand and heavy machinery sit, waiting to be used. 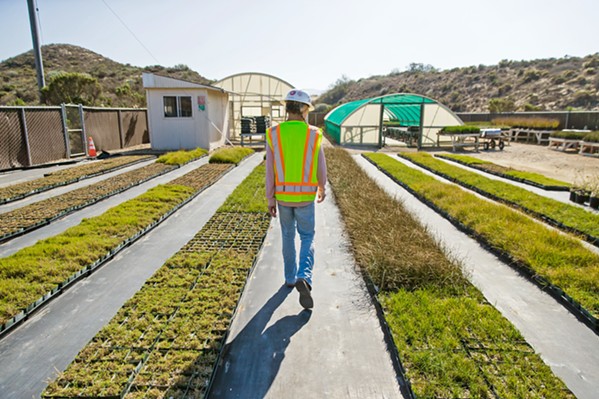 Without those blatant markers of human activity, it'd be almost impossible to tell that this vast 2,800-acre slab of land was once home to the Guadalupe Oil Field and a spill that San Luis Obispo County is still pushing to clean up after more than two decades.

And that's exactly the point, according to Danielle Wold, one of many Chevron Environmental Management Company employees working to rid the field of contaminated soil and water and return the land to its natural state.

The Guadalupe Oil Field has been in the midst of a remediation and restoration process since the mid '90s, when diluent—a hydrocarbon similar to kerosene—leaked into the Pacific Ocean and emergency cleanup efforts at the site first started. Oil production began on the property in the 1940s, and Union Oil Company of California (Unocal) managed about 240 oil wells and more than 180 miles of pipeline in the field from 1953 until 1994, during which an estimated 12 million gallons of diluent leaked onto the surrounding dunes, beach, and into the groundwater and ocean.

When Chevron purchased Unocal in 2005, it also took on burdens like those at the Guadalupe Oil Field.

"A lot of what happened out here was common practice at the time," says Wold, restoration project manager, as she walks through a portion of the field and points out the footprint of land that could be used for Chevron's next big move: a "treated soil management area," where contaminated soil would be essentially placed in a lined hole and buried on-site.

The proposed plan would reduce local greenhouse gas and air emissions, Wold says, because up until 2016, Chevron had been excavating impacted soil from the field and then trucking it 40 miles round trip to the Santa Maria Landfill for disposal. The process resulted in 68,820 haul truck trips driving more than 2.6 million miles and dropping off 1.11 million cubic yards of contaminated soil. With about 1.85 million cubic yards of contaminated soil remaining in the Guadalupe Oil Field, Wold says burying it on-site would eliminate more than 69,000 additional haul truck trips, decreasing pollution, traffic congestion, road erosion, and safety issues on local roads.

It would also save Chevron roughly $6 million a year for the next 10 years, she says. But compared to the $20 million to $25 million the company spends on restoration efforts at the Guadalupe Oil Field each year, Wold says the savings are only a small benefit compared to those foreseen for the environment.

The on-site disposal idea is one of those plans that just makes sense from every angle, Wold says, and many SLO County community members agree.

At a meeting on Oct. 28, the South County Advisory Council voted 8-1 to recommend approval for the project, despite some concerns that burying the contaminated soil could lead to other pollution issues.

The polluted soil would be excavated from various areas of the field and buried in an 18.2-acre hole secured by a geosynthetic clay liner overlain by another liner, and then capped and covered by at least 4 feet of clean material, according to the project description. Then the finished surface would be graded and landscaped to match surrounding dune scrub habitat.

Some fear the double-liner system won't be enough to keep the contaminated soil in place, according to Kevin Beauchamp, vice chair of the South County Advisory Council.

"But," Beauchamp told New Times, "it's not any better in the Santa Maria Landfill, is it?"

Chevron's proposed liner meets higher safety standards than the liner used at the Santa Maria Landfill, Beauchamp said, where the Guadalupe Oil Field soil is currently being dumped. Beauchamp also noted that the contaminated soil still remaining in the oil field is considered non-hazardous—meaning contamination levels haven't reached the threshold required to designate the situation as being dangerous.

Much of the soil that Chevron still has to remove is contaminated with diluent, but a good portion is untainted gravel and red rock that was brought in to build roads and well pads, material that has to be removed simply because it's unnatural to the area.

A majority of the most dirty work is over, Beauchamp said. Although he's not happy that a pristine part of SLO County's coastline was completely polluted, he said the restoration work happening on-site is "pretty amazing," and this project could prevent further impacts on the environment.

Chevron's proposed plan will next go before the SLO County Planning Commission and Board of Supervisors for final approval. Δ