The fight over redistricting in California begins

by ROBERT A McDONALD 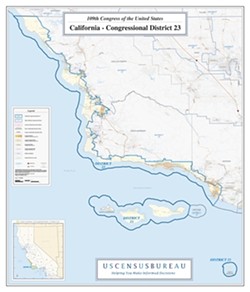 In addition to deciding if they want to smoke their doobies legally, voters this November will have a chance to choose how political power is distributed in California. Among the propositions and candidates struggling for Election Day victory are two ballot propositions that will help decide how political boundaries will divide California in the years to come.

The outcome of these propositions will determine how political power is distributed in the state and may, in the long run, affect the balance of power in the U.S. Congress. Both propositions could dramatically change California’s political landscape.

Propositions 20 and 27 are diametrically opposed plans that fight over the same political airspace.

Under present law, California political boundaries are set to be drawn by an independent commission consisting of an equal number of Republicans and Democrats and a smattering of independents. Voters approved this in 2008 in the form of Proposition 11, taking away redistricting power from the state Legislature.

Proposition 20 would take the idea a step further: If approved, the commission would also create the boundaries of districts for the House of Representatives. Such a move would take the redistricting process entirely out of the hands of elected politicians.

Proposition 27 would do the opposite. The election committee would be eliminated and all state and federal legislative boundaries would once again be drawn by the Legislature.

Every 10 years, the boundaries for all legislative districts in the country are redrawn to reflect the growth of the population documented by the federal census. How those boundaries are drawn and by whom is one of the most fundamental issues in American political life.

The seeds of political power lie in the hands of those who control the architecture of redistricting. Traditionally, state legislatures have the power to divide the political pie that is the population of a state. If one power dominates the legislature, those who draw the lines can create districts that protect and secure the centers of power.

The California Democratic Party, with the quiet and sly approval of some accommodating Republicans, divided the state according to its political needs and desires in 2001. Safe districts were carved out for both Democrats and Republicans. If the goal of the boundary makers was to serve incumbents of both parties, it certainly worked: Only one congressional district changed party control in the last 10 years.

Locally, the political map bears this out: The 23rd congressional district represented by Democrat Lois Capps stretches along the coast from Malibu to the border of Monterey County, sweeping up any town or neighborhood that has Democrats to ensure her perpetual re-election.

That fact shows how the old system was unfair, said Kathay Feng, executive director of the California chapter of Common Cause, a nonprofit, non-partisan citizens’ lobby organization. She said her organization supports Proposition 20 and is against Proposition 27 because politicians need to be kept out of a process through which they can secure their own easy election.

“The reality is politicians made an ugly deal to design safe seats,” Feng said. “Prop. 20 would put the redistricting in the hands of citizens who design seats that reflect what will be a dramatically more objective process.”

Susan Shafer, spokeswoman for the simply titled Yes on 20/No on 27 campaign, said Proposition 20 is an extension of the public’s will that approved of the commission’s work in drawing state legislative lines.

“This will allow voters to hold politicians accountable,” Shafer said, citing what she calls heavily gerrymandered districts loaded with a population of a single party. “When the system is set up so that election results are not a foregone conclusion, we are much better off.”


He said the work of the citizens’ redistricting commission is “senseless and a waste of money” and argues that the Legislature should once again have the right to draw its own political boundaries.

“It makes no sense to have an undemocratic bureaucracy doing this work,” Lowenstein said. “If this is done at the congressional level, we would be at a disadvantage. We could lose the benefit of seniority in Congress and lose out on millions of dollars that we need in these difficult economic times.”

It’s difficult to find a pronounced supporter of Proposition 27. There is no Proposition 27 website—unusual in a modern political effort. What is obvious is the Democratic Party establishment is supporting the effort to return redistricting powers to the Legislature. The donors’ list for Proposition 27 reads like a who’s who of progressive heavyweights in California: Nancy Pelosi for Congress, $10,000; Friends of Lois Capps, $10,000; and many of the Democrats running for legislative offices. Unions are putting in hundreds of thousands, and George Soros, a billionaire known for being a financial backer of Moveon.org, is contributing $100,000.

Proposition 20’s financial supporters comprise a few business groups and retired millionaires. So far, Republican money seems to be on the sidelines in the fight of the dueling propositions.