Editor’s note: New Times did not include the last names of any inmates at the request of The California Department of Corrections and Rehabilitation and Cal Fire.

The day's sun beats down on a group of men trudging up a steep hillside within the Santa Margarita Ranch. They wade through thick clusters of poison oak as they secure their footing and go about the business of pulling down a tall coastal oak tree using a rope. They grunt and heave until it finally comes crashing down. 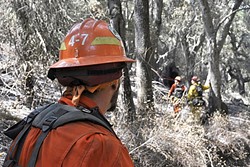 It’s Friday, Aug. 21, and the Cuesta Fire, which burned more than 2,446 acres over the course of six days, is on its last legs. Most of the flames that enveloped the hillside and threatened the nearby town of Santa Margarita were extinguished or contained, but there’s still a lot of work to do. Smoldering hot spots still need to be put out, brush needs to be cut and cleared, trenches dug to head off any complications should the blaze spark back to life. It’s ugly, back-breaking, and unglamorous work, and some of it’s being done voluntarily by groups of inmates from California’s state prisons.

The men working on the hill that day are easily identified by their bright orange clothing, and by the large vans with grated windows that transport them. They are participating in the California Department of Corrections and Rehabilitation’s (CDCR) Conservation Camp program. The program, run in partnership with Cal Fire, allows non-violent offenders a chance to serve their time outside the walls of the state’s correctional facilities, where they can live and train at special “camps” to assist firefighters in battling blazes across the state.

“I love the outdoors,” said Charles, one of about 14 inmates on the crew that day. They’d been out in the field since 6:30 that morning, and likely wouldn’t return to base camp at Camp San Luis Obispo until late that night. “It beats sitting in a cell all day.”

The inmate firefighter program was established in 1946, and is one of the state’s longest running rehabilitation programs. Today there are 39 such camps in the state, where the inmates selected to participate in the program live year-round. In those camps, the inmates live, work, and train together. There are no cells, no concertina wire, and just a few corrections officers to oversee the groups as they learn and work. There’s more freedom and better food, all incentives to join up and live “outside the wall,” away from some of the tensions and dangers of prison life.

“Things are better, … you don’t always have to be on your toes,” said Jeff, another member of the crew.

The groups are always on call. When they aren’t fighting fires, they work on prevention and conservation projects.

The program can accommodate up to 4,000 inmates, but getting in is easier said than done. Only medium-security inmates in general population are eligible to volunteer. Inmates convicted of serious or violent crimes, as well as sex offenders, aren’t eligible. Most inmates on the fire crews have been convicted of drug-, theft-, or property-related crimes.

“When screening inmates, CDCR looks beyond their convictions to their behavior in prison,” state corrections spokesman Bill Sessa wrote in an email to New Times. “We rely on teamwork on the fire lines, where an inmate’s ability to work with other people on the team can be a life-or-death situation. We look at their behavior record. Inmates with disciplinary problems are not chosen for the program.” 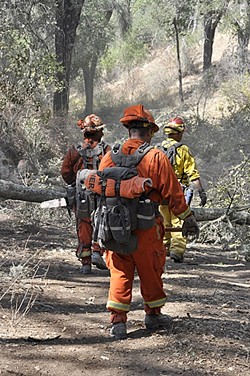 Once they are approved for the program, the real work begins. Before they are able to fight fires, they participate in hands-on training, including two weeks of grueling physical conditioning.

“It looked like it was going to be no problem,” Charles said. “But once you get there, you realize it’s harder than it looks.”

Things only get more physically demanding when the crews are called out to fires. During fires, the inmate crews are tasked with clearing brush in rough terrain, building fire breaks, and setting backfires to stop the spread of a fire while Cal Fire crews work from water tankers or air drops. It’s real and dangerous work, for which the inmate crews get paid $1 per day while working the fire line.

Most of the crew at the Cuesta fire had been in the program for at least several months and already had multiple fires under their Pulaskis.

Donnie, an inmate who’d been part of the crew for a little more than six months, recalled his first fire and the dawning realization that he’d be putting his training into practice in the midst of an actual wildfire.

The crews are supervised by Cal Fire Captains like Adam Ambriz. Ambriz supervised the crew working the Cuesta Fire, which was based out of the program’s Vallecito camp. By that time, the group had been on the road fighting one fire after another across the state for the last 31 days. He said many of the inmates he worked with were motivated and eager to help—the program offered them a chance for real personal growth if they can overcome the steep learning curve.

“Some of them, you just see the light bulb go on, and they love it. It’s kind of what they needed,” Ambriz said. “It’s their sense of self-worth.”

Ambriz said he tries to encourage the inmates by showing them the fruits of their labor, which is often dirty and difficult, and how their work stopped the fires from spreading and how their efforts protected the life and property of those nearby.

“This is you doing this,” Ambriz said he tells them.

In the end, the inmate crews and the civilian firefighters are working toward a common goal, Ambriz said. It’s that goal that bonds the groups, which would usually be separated by fences, walls, and barred cell doors.

“They realize that their life might have been bad, but that they have the opportunity to turn it around, and not be judged by it,” he said.

It was a sentiment Donnie echoed as he took a break from the long day’s work. Dressed in bright orange fire-retardant clothing, covered in dust and dirt, knowing the coming days would be no less tiring.

“They don’t look at us like we’re just inmates,” he said. “They treat you the same as they treat the other firefighters.”

Staff Writer Chris McGuinness can be reached at cmcguinness@newtimesslo.com, or on Twitter @CWMcGuinness.