Newly released drone footage from a July 21, 2020, protest showing the altercation between a driver and protesters on Highway 101 shows a different side than what the California Highway Patrol (CHP) and SLO County District Attorney's Office provided to the community and in the cases against seven of the protesters. 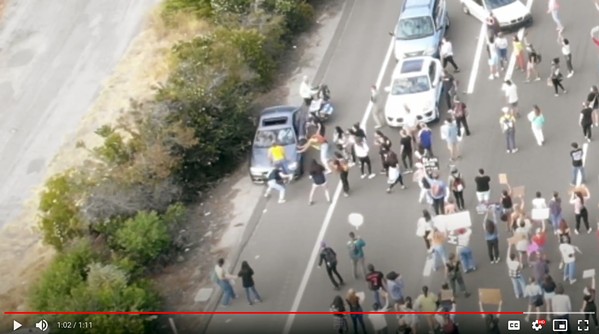 The footage, which is from the SLOPD and is evidence in the cases, was released Feb. 16 by Vincent Barrientos, a pro-bono attorney for Sam Grocott, one of the protesters who's facing three misdemeanor charges of violating the personal liberty of the drivers and occupants of three vehicles.

Drone footage shows the protesters across Highway 101 and a halted line of cars at the Olive Street on-ramp. Two cars, white and silver sedans, try to maneuver onto the highway, but protesters approach the cars.

A bicyclist stands in front of the silver car, which moves forward and hits the bicyclist. The car backs up and goes around the bicyclist, hitting another protester in a yellow shirt, Grocott. The vehicle continues moving forward even though Grocott was holding on to the hood of the car. Robert Lastra Jr. (charged with defacing, damaging, and destroying personal property) throws a skateboard at the vehicle's rear window. The driver picks up speed, Grocott jumps off the hood of the car, and the vehicle drives away, according to the footage.

Several protesters who attended the protest spoke with New Times in July 2020, saying that the driver disregarded their efforts to prevent him from driving through them, revved his engine, and hit one of the protesters.

Days after the protest, CHP posted on Facebook that it was searching for the individuals involved in the altercation with the vehicle.

"While traffic was stopped, a group of protesters became violent and encircled a motorist who was attempting to drive around protesters. The motorist's vehicle was attacked by the protesters. One suspect jumped on the hood of the victim's vehicle and an additional suspect broke the rear window out of the vehicle with a skateboard as the vehicle was leaving the area," the post stated.

In a press release, Barrientos said the driver's statement against his client says the driver didn't want to wait for protesters because he had a hotel to check in to.

"No rational person, regardless of your political leanings, would believe that you can drive your car in to a person because you are in a hurry to check into a hotel," he said.

Barrientos sent a redacted letter to CHP Capt. Greg Klingberg demanding he inform the press that he lied to the public and misrepresented the facts of the case against his client, and arrest the driver of the silver 2016 BMW or resign from the agency. Barrientos also wrote that a responding officer provided video-recorded statements to a CHP officer in which the driver said, "I'm about to go 100 miles per hour through that motherfucking retard stupid ass crowd" shortly after hitting Grocott.

"These lame fucks, I should have brought back my Glock," the driver said, according to the letter.

In the letter, Barrientos states, "Your failure to arrest [the driver] raises alarming concerns that you may be supporting SLO District Attorney Dan Dow's thinly veiled white power agenda. Notwithstanding that Mr. Dow has aligned himself with white conservative extremist values, Mr. Dow was found, by order of the SLO Superior Court, to have an actual conflict of interest in this case."

The letter goes on to say, "Mr. Dow filed charges against my client for his political and professional benefit. In fact, Mr. Dow only filed charges against my white client, after it became obvious to the good people of SLO that Mr. Dow was abusing his prosecutorial discretion to selectively charge only Black protesters. So, it begs the question, why is [the driver], a white, racist, not facing any criminal charges for intentionally driving his vehicle into my client's person?"

Barrientos told New Times he has a real problem with law enforcement, not just in San Luis Obispo County but anywhere in the country, lying to the public.

"It's a systematic problem that troubles our entire country. They have video evidence, usually body cam and other things, and they don't release it to the public because they say it's part of an active investigation. Yet, they'll go to the press and give a statement that often contradicts what's actually on the video," he said.

He wants to expose that dishonesty to the public.

Hours after the drone footage and Barrientos' letter to CHP were released on Feb. 16, the San Luis Obispo District Attorney's Office released a statement. It said that the office is confident that the facts and circumstances surrounding Grocott's arrest will be fully and fairly revealed in court once the matter is tried before a jury of "our community members."

"The District Attorney will not respond to the non-fact-based rhetoric of Mr. Grocott's counsel. In fact, the California Rules of Professional Conduct prohibit an attorney involved in the litigation of a case from making a statement the attorney reasonably knows will be disseminated to the public and that has a substantial likelihood of prejudicing the case," the statement said. "The rules of professional responsibility are intended to assure the fair application and due process of law for all parties. These rules apply equally to prosecutors and criminal defense attorneys."

Barrientos said in all his years as an attorney, he can't think of anything precluding him from releasing evidence in a case to the public. Δ