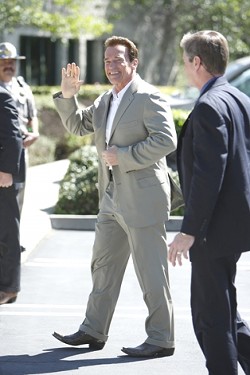 # A group of about 40 people--all with their own varying reasons for being there--congregated in front of the City/County Library on the morning of March 26.

Gov. Arnold Schwarzenegger was coming to San Luis Obispo to discuss the state budget crisis--and the anticipation of his arrival brought out spectators, supporters, and protesters.

But he didn't play to the crowd.

Flanked by California Highway Patrol officers, Schwarzenegger avoided most of his audience by entering the library through a side entrance.

Outside, clad in a Pepto Bismol-colored outfit, was Joan Carter of Code Pink. She came to give the governor a piece of her mind concerning overseas warfare and the budget.

"We have budgetary shortfalls in all aspects of our life--state, county, city, education, health care--because the money has been siphoned out to Iraq," she said.

Carter said that she'd like to see an end to the war in the Middle East.

After a short session with private guests inside the library, Schwarzenegger made his way to the Tribune office on South Higuera Street. Waiting in front of the Central Coast daily newspaper's building was an audience of approximately 35 people carrying signs protesting the governor's budget plans and chanting "Flunk our budget, not our kids!"

Mark Buchman was heading up the rally.

"We're here to say a slash and burn budget doesn't work. Ten-percent cuts across the board [don't] work," he said. "The governor's approach is just wrong."

"The governor needs to make cuts where they will do the least damage and put money where [it will] do the most good," he said.

Not everyone on the street was there to protest. Some, like 19-year-old UC Santa Cruz student Timothy Sherry, attended just to get a glimpse of the former action movie star.

"I was here to hopefully shake Arnold's hand and have him autograph my Total Recall VHS," Sherry said, holding an analog copy of the 1990 award-winning science fiction film, which includes a scene of a slow-dancing female alien character with three breasts. "I've been a fan since I was a little kid when my dad showed me the movie The Terminator, and ever since, I've been Arnold all the way."

Sherry had a contrasting view of the seven-time Mr. Olympia champion than the griping masses.

"I think he's doing a great job," he said of Schwarzenegger's political decisions. "I wish he would make some more movies."