The Proud to Be … exhibit shows at the GALA Center Gallery in SLO through Aug. 18. An artists’ wine and pride reception will be held July 7 at the gallery from 6 to 9 p.m. as part of Art After Dark. Visit galacc.org for more information.

Growing up, Jonathan Haile loved to watch the popular comedy Night Court on TV. In particular, one character from the 1980s show really resonated with him: Roz, a tough bailiff who happened to be shy, just like Haile. And in real life, the African-American actress behind the character, Marsha Warfield, is now a proud and out member of the LGBTQ community, just like Haile is today.

In an acrylic painting by Haile titled Roz, the character stands tall in front of a bold red background looking down demurely, decked out in full uniform and wearing gold hoop earrings. On the back of the canvas, the San Luis Obispo-based artist wrote the monologue Warfield delivered about being shy on Night Court. Roz is currently on display as part of the Proud to Be ... exhibit at the Gay and Lesbian Alliance Center gallery in SLO. The show, which features the work of artists in the LGBTQ community in SLO County, opened in June ahead of the upcoming 21st annual Central Coast Pride events in July.

"The character I painted is sort of no-nonsense," Haile said. "She's a bailiff and uses her physical presence to intimidate, but actually she's afraid people won't like her."

Warfield, now in her 60s, is openly gay. But in an interview with the Akron Beacon Journal last year, the actress described herself as "closeted" during the '80s and '90s.

It's an experience many members of the LGBTQ community can relate to. Morro Bay digital artist Bree Turner, who is also in her 60s, came out just seven years ago as trans. Though she identifies as a woman, she spent the majority of her life as a man. Turner said even from as young as 7 years old she knew on some level that the gender she was assigned at birth wasn't the right one for her.

"I am who I am," Turner said. "It's a difficult concept for people to grasp, even in gay and lesbian circles, because we [trans people] don't fit in anywhere." 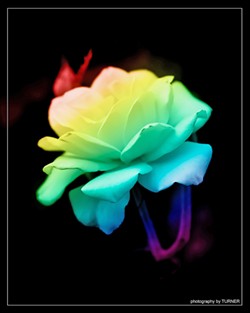 Her piece in the show, Beauty in ALL Colors, is a photograph of a single rose taken at a library in Southern California. In real life, the flower was pure white, but with some Photoshop magic, the petals are softly tinted with each color of the rainbow symbolizing the LGBTQ flag.

It's a time where many feel that LGBTQ rights, including the right of trans people to use the bathroom they feel comfortable with, are being challenged at the federal level. Locally, recent incidents like the burning of a rainbow Pride flag, make members of the LGBTQ community here wonder how far acceptance goes. With her piece, Turner hopes to bring a bit of light to the community.

"Everybody focuses on the angst and conflict," Turner said. "It's a perfect expression, it's just a rose and it happens to be rainbow. When a muse speaks to an artist, you have to listen."

Turner hopes people viewing her work might just be inspired to take on a different perspective.

"That's the nature of art," Turner said. "I'd like to think my art gets people to look and reflect. How do we define what is male and female? Maybe we should define ourselves as people." Δ

Send stories of artists of all backgrounds to Ryah Cooley at rcooley@newtimesslo.com.