Thanksgiving means family gatherings, but this year we're being encouraged to steer clear of large parties, avoid travel, and basically hunker down with those we live with and don't go anywhere. It's downright depressing, but leave it to some Cal Poly grads to turn your frown upside down. Both Próxima Parada, a local blue-eyed soul quartet featuring a couple of Cal Poly grads, and Amytra, a Cal Poly journalism grad and emerging adult contemporary artist, are releasing songs to cheer you up.

We'll start with Próxima Parada, who's released a new video of the title track off their new album Kind Reminder. The video, available Nov. 25 on YouTube, features the song's lyrics superimposed over archival black and white footage of children and their parents.

"How many people had to survive, so you could arrive?" the song begins. "I'm still thinking about your beautiful face. You-ooh-ooh are amazing. How many stories live in you? From the Middle Ages, oh-oh from ancient times, how many times did they sacrifice? How much sweat on the brow? Ooo-ooo how many miles? Please oh please forgive everybody. Who-oo-o's forgotten where they come from? Who's forgotten who they are? They don't need your back and hatred. They need your face. Oo-oo they need your embrace and a kind-kind-kind reminder. How many people had to die so you could be alive? When I'm looking at your face, oh-oh it's the face of a million, oh-oh it's so much more. When you see me passing by, oo-oo would you kindly remind me oh-oh of my ancestor's feet, all the fields of wheat, all the rows of thirsty seeds?"

Going through this pandemic, it's easy to focus on our own hardships and suffering, forgetting the multitudes who came before us—men and women who toiled and sacrificed and suffered and died for their offspring. What we're going through sucks, but we're not the only ones who have weathered difficult times.

"Thanksgiving feels like a good time to encourage people to remember the sacrifices and mysteries that live inside of us," the band said in an email. "Given the current climate, we all need a kind reminder. Join us in sharing this uplifting video with folks."

"We can feel gratitude for the long, long line of ancestors that live inside of us and have made countless sacrifices so that we could finally arrive here today," the band continued. "And now, as a continuation of them, let's keep showing up for ourselves and for others, closing the gap that divides us, and embracing our differences. There will be countless generations to follow us, so let's acknowledge, but also learn from, our past in order to better set up those who follow." 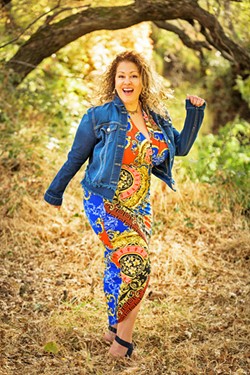 Meanwhile, on Thanksgiving Day, Amytra will release her debut single, "World Wide Healing," on iTunes and all streaming platforms including Spotify and Apple Music, as well as Amazon and Google Play.

"It's time, it's time for love. Can you feel it? Feel it? It's time to search our souls. It's time we all let go," she sings. "One day love, world wide healing."

The pop track has a reggae/island sound, with Amytra's beautiful, emotive voice.

"It was written by me, Kenny Henderson, Jessica Adams, and Rudolph Cannonier, with vocal arrangements/mastering by Dr. Ron Moton, world renown jazz musician and 22-year member of Platinum, Grammy Award-winning group, Confunkshun," she explained in an email.

Amytra's sound is inspired by Minnie Riperton, Janet Jackson, and Sade, and she lists Prince as the inspiration for her biographical and "sometimes quirky" lyrics. She hails from a musical family. Her uncle Hank Crawford was Ray Charles' musical director before he embarked on a solo career recording with Atlantic, CTI, and Milestone. Her mother was a member of the Monterey County Symphony Orchestra in the '60s, where she met Amytra's father, James L. Crawford, a bass player.

When her mom became bedridden and unable to play the violin because of arthritis in her hands, Amytra focused her attention on her own musical dreams. Her mother passed on July 25 of this year, so Amytra decided to release "World Wide Healing" in her mother's honor and in honor of all those who've suffered in the wake of COVID-19 and race riots.

"I wanted to provide a musical salve to mitigate the pain and loss of 2020," Amytra said.

Now, for that light at the end of the tunnel. Unless you already bought tickets, you can't go because it's sold out, but there's a Nov. 29 drive-in concert this weekend featuring violinist Brynn Albanese at the JCC-Federation—the county's first allowed drive-in show.

"Strange yet amazing times we are in," Albanese said in a text message. "I am so grateful for these opportunities. A little tidbit about this show. [SLO County Public Health Director] Dr. Penny Borenstein is the one who approved it. She will be at the concert since that is the Temple that she attends. I think she's getting very close to being able to clear drive-in concerts to live musicians. Maybe this is going to be a tryout to see how it works."

Fingers crossed! Happy Thanksgiving to you and yours. Stay safe! Δ