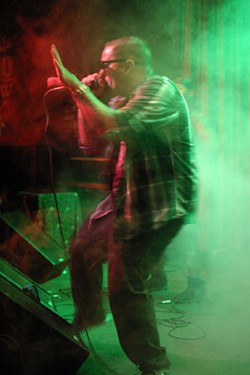 Odonovan, a country rock act that won Best Rock/Alternative with their song “Country Krunk,” looks like they should be opening a stadium show for Garth Brooks. The ladies are swooning, the dudes are grooving, and it’s anyone’s guess what the judges are thinking.

Open winners, Shadowlands, start their set with their winning song “Restless Mind,” and continue with a series of emotive, beautiful, haunting folk songs, filled with harmony vocals, keyboard, guitar, and stunning cello. They’re jaw-droppingly good, but set against hip-hop and rock acts, they have their work cut out to win Best Live Performance with a crowd jacked up by the first two acts.

Country winner Stephen Styles, with his track “Think of Home,” is up next, backed by banjo, guitars, and lap steel. The energy is rising as he and his crew rip through a great set. 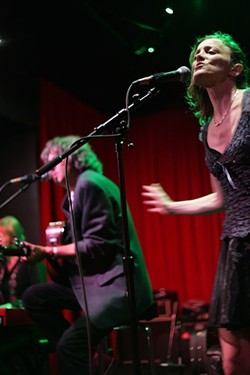 The final act of the evening, Próxima Parada, which won both first and second place in the Blues/R&B Category with “See These Eyes” and “Climb to Love,” brings on their blue-eyed soul. The four young, handsome, just-out-of-college dreamboats waste no time winning over the crowd and the judges, who deliberate for just a few minutes after the closing set, to award Próxima Parada Best Live Performance!

Throughout the night, the other winners collect their awards. Loren Radis wins second in Country and Occasional Mustache takes 3rd.  Ohara takes second in Open with Tiana Star third. Britches wins second in Hip-Hop with K & Whereabouts third. The Bob Doca Band wins third in Blues/R&B. We Were Super Heroes takes second in Rock/Alternative with The Monroe in third. Famous Deuce & Roach Clip with the Readers’ Choice award. Album of the Year goes to Jody Mulgrew & The Skeleton Crew for Let Them Talk, Dulcie Taylor & Friends comes in second with Only Worn One Time, and The Turkey Buzzards win third with Hobos Don’t Call It Camping.

Thanks to all who came out to support our local music scene!