On the corner of Broad and Pismo streets lies a totem to San Luis Obispo: an intriguing utility box that colorfully depicts a man riding his bike on one side, and on the adjoining sides elements of nature, such as a fawn and tree. The piece was created by Alister Dippner in 2012 as a part of the Box Art Project, a city-commissioned project in which different artists were paid to paint a total of 32 utility boxes in San Luis Obispo. The initial aim of this project was to deter graffiti, as well as to add “a bit of joy and beauty” to unexpected places. Each artist was required to present their ideas before a board, and their ideas had to be approved before they were embodied. However, months after the approval and creation of Dippner’s idea, the city received a demand from local Peg Pinard to have the piece removed. In the New Times article, “Arts and Crass,” Pinard describes how she simply does not like Dippner’s creation and is upset that it was “installed with no neighborhood input.” Pinard declares that if the city is going to have “public money spent on public things, then the public gets to say what is art, and right now I’m representing the public.” Pinard’s reasoning for having the utility box art removed is founded on two major ideas: the first being her definition of public art, and the second being the judgement of agreeability she is making about the piece. However, the notable philosophers Immanuel Kant and Hilde Hein provide sound theories that shed light on the flaws in Pinard’s reasoning and support the preservation of the controversial piece. 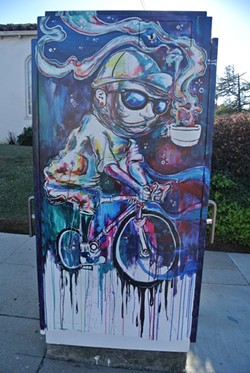 Pinard’s argument is first proven wrong through Kant’s theories on the different types of judgements that can be made on art. When Pinard describes that she does not like Dippner’s piece, she is making a judgement of agreeability, or a judgement of liking. These are judgements strictly of opinion and are subject to change from person to person. Pleasure is strictly the basis for this judgement, and there is no rhyme or reason for having it. This would be like saying, “I like peanut butter,” or “I do not like quinoa.” This kind of subjective judgement Pinard is making is not valid for her argument because it is strictly her opinion, and she is assuming everyone else will feel the same way. Through her single judgement of agreeability, she is not authorized to represent the opinions of the entire community.

Valid aesthetic judgements can be made of this piece, which counters the weak judgement of agreeability Pinard is making. Kant defines aesthetic judgements as being judgements of taste or beauty. A certain kind of cognitive activity occurs between one’s imagination and the concepts in the piece. Kant terms this sensation “free play,” and this free play evokes certain feelings of pleasure. Although pleasure is involved, particularly when looking at this utility box, it is not the basis for the aesthetic judgement. Instead, the basis for the judgement is the cognitive process itself that produces pleasure as a side effect. The reaction itself that one has to art, and Dippner’s art in particular, proves that it is aesthetically stimulating in Kant’s terms.

Furthermore, there are four essential components or moments that occur in the process of making an aesthetic judgment. The first is a feeling of pleasure in the free play that occurs as one’s mind takes in the concepts in the piece and processes them through his or her own imagination. As one first sees Dippner’s utility box, the different colors are taken in and applied to each character. One tries to bring unity and meaning to the colors of the fawn, biker, tree, and coffee. The second essential moment that occurs is the idea of a necessary beauty that everyone sees in a piece. It is Kant’s idea that all brains essentially process aesthetics in a similar way. So even if everyone does not agree something is beautiful, they should because of the value of the cognitive process that occurs. Productive discussion also spurs from these kinds of judgements through the free play that occurs. Thirdly, universality can be applied in the objects of these judgements in that they can be organized by genres and movements. For example, this utility box could be described as modern or surreal. Lastly, aesthetic judgments all entail purposiveness in that one treats the work as a meaningful whole. One can speak of the piece and all of the elements in it as a way to express or communicate Dippner’s interpretation of life in San Luis Obispo.

Pinard’s second argument for removing the piece is that it does not fit her definition of public art. She assumes that the utility box is public art because it has been publicly paid for and that it is present in a shared space. However, noteworthy philosopher, author, and curator Hilde Hein would claim her definition is too simple. In Hein’s idea, art cannot simply be public art due to its exposure. This is due to the fact that anything can be in a public space without special social relevance or meaning. Secondly, it cannot be public art due to the fact it is publically owned or paid for, since many pieces of public art are actually privately funded. Hein presents a broader, more inclusive definition of public art that argues that for a work to be coined “public,” it must express the “deepest values” of or unify a “coherent social group.” Dippner’s utility box is a good representation of public art because it expresses the artist’s viewpoint of life in San Luis Obispo. Bikers can be seen throughout the city, riding along with coffee. The artist himself states: “My vision and intent for this project was to evoke what SLO meant to me.” He did this by invoking “daily morning bike rides watching the sunrise peak over the horizon,” and “elements of nature such as a baby fawn.” 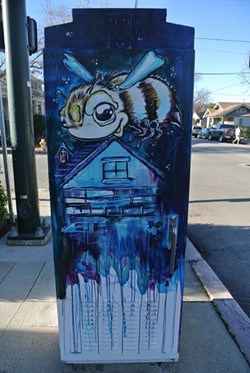 Lastly, Hein believes that public art should draw the audience into productive discourse. Individuals should debate, argue, and present their unique perceptions to each other. Art is made and viewed for individual reactions. Sharing these reactions is important in generating conversation.

In a way, Pinard making such a fuss over this piece solidifies its title as good public art in that she expresses her opinion and draws others into her discussion. Hein proves that public art is not about the individual experience, but about the overall collective experience. It is up to a public artist to create public art that reflects the “culture of the community,” and that is exactly what Dippner has done.