I’m chilling in the back of SLO Brew, watching Public Defendaz whip up the crowd, drawing them closer to the stage. The local hip-hop act is first up at the New Times Music Awards, and even through we’re facing off against Incubus at Avila Beach, we’ve got a respectable crowd on hand—well over 200 people. 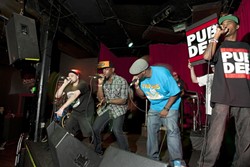 Hey, there’s Ted Waterhouse, whose song “Feels Like New Orleans” won second place in the blues and R&B genre. Ted and I both have earplugs in because we’re old, but we still want to be able to hear as we get even older.

“I never listen to this kind of music,” Ted says, nodding toward the stage, “but I can still tell these guys are good at what they do.”

I’m not a super big hip-hop fan either, but Public Defendaz are laying it down, and the crowd’s eating it up. Not only did the rap ensemble win the hip-hop genre, they won the online Readers Choice award and by the end of the evening, the judges would also award them Best Live Performance, but that’s hours away still.

Next up is Dr. Danger, who I’ve never seen before. They play a lot of gigs in the South County, they won the blues and R&B genre, and they’re delivering a slick, polished set of danceable tunes. What a show!

I can’t help but think that between Public Defendaz, Dr. Danger, Jade Jackson, and Briertone, we’re stretching some concertgoers’ comfort zones. These aren’t acts that share a fan base! Nonetheless, the crowd is attentive, and everyone seems to be having a good time.

Next up, the sultry chanteuse Jade Jackson takes the stage, and the crowd is treated to a set of warm, intimate, and haunting songs delivered by an increasingly polished performer. Word on the streets is Jade’s going to Cal Arts and has been collaborating with some famous musician’s kid. John Fogerty’s kid maybe? I can’t remember (Thank you, Jameson!).

“Because I didn’t have anything new,” she says, giving me a hug. “Ooh, I’m all sweaty! Sorry I made you hug my sweat! Look, we gave Jody a rocket ship.”

Sure enough, Album of the Year winner Jody Mulgrew wanders up with a lit-up red rocket in his front pocket, a tribute to his new album Rocket Ship.

“Is that a rocket in your pocket or are you just glad to see me?” I ask, because that’s just a hilarious thing to say, right?

Then Inga says something about riding the rocket to the show and then my act turns really blue, but since this is a family paper (sort of), I can’t tell you what I said. Use your imagination.

Soon Briertone takes the stage and rocks it, all their youthful energy emanating from the stage in waves.

Newties are handed out, people hug each other, Charlie Kleeman suffers a bleeding head injury. It’s just another awesome night at SLO Brew. Wish you were here. ∆