Poetry, parodies, singing, and shoes were not enough to swing another vote against the Santa Margarita Ranch project.

As of press time the project seemed headed toward approval,  but a final decision had not been made. 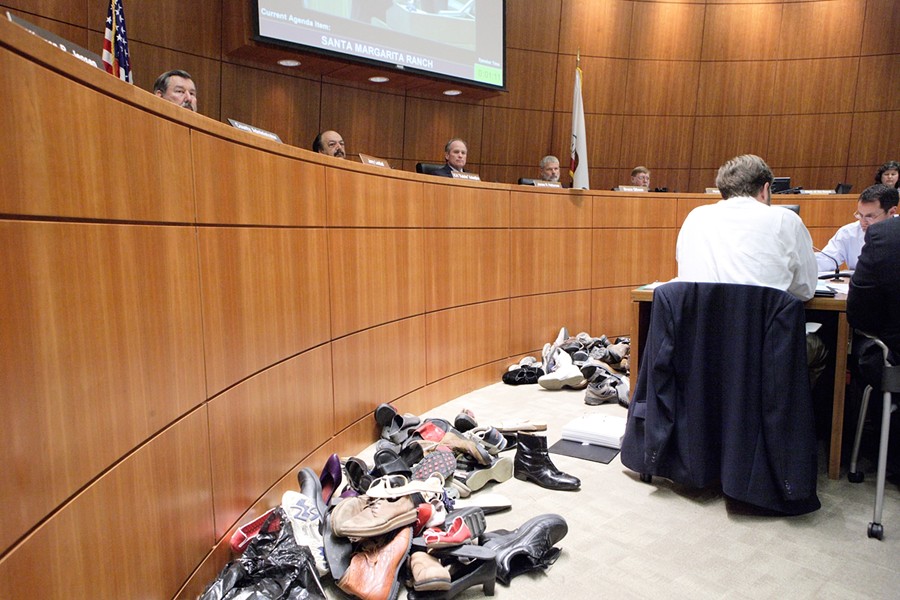 On Dec. 19, supervisors met in a special appeal hearing (officially called an adjourned meeting) for the Santa Margarita Ranch project appeal. Lame-duck supervisors Jerry Lenthall and Harry Ovitt artificially extended their terms after continuing the hearing to a non-regular board meeting, effectively ensuring that supervisors-elect Adam Hill and Frank Mecham would not get the final say. They tentatively approved the project using conditions that the developer, Doug Filipponi, and his representatives wrote. County staff opposed the developer’s conditions, but were told to use them anyway for the final approval which was pushed again to Dec. 23.

As the first public speaker read a prepared statement condemning Lenthall, Ovitt, and Katcho Achadjian for their preliminary approvals, about a half-dozen people silently walked to the front of the room with black garbage bags full of shoes and emptied them in front of the supervisors.

“Harry, Jerry, and Katcho, these are your shoes of shame,” Jono Kinkade said.

Others added their own shoes to the pile throughout the day. Dr. Richard Kresja, who was a supervisor in the 1980s, said a project approval would be an “act of contempt.” He then placed one shoe in front of Ovitt and gently lobbed another across the room that landed squarely in front of Lenthall. Lenthall cracked an amused smile when the shoe flopped in front of him, one of the only times any of the supervisors’ otherwise stoic faces changed. Kresja also gave Achadjian a bottle of Tums for his remaining two years on the board, where his vote is anticipated to often be in the minority.

Only a fraction of the speakers lived in Santa Margarita. Others had come from throughout the county to speak out against the project and its 10 unavoidable impacts, but seemed even more motivated to scold the three-member majority.

Naomi Blakely, wife of former supervisor David Blakely, said her ordinary attempts to persuade supervisors fell flat. So she decided to sing a parody of “We Three Kings.”

“Those three kings of SLO County are ramming through those projects sub-par,” she sang.

On cue, most of the audience joined.

Filipponi seemed lightly amused by the crowd’s antics and joked that it was a good display of “holiday spirit.” He added that project proponents simply hadn’t stuck through all the hearings. Two people, aside from the applicants, spoke in favor of the project on Dec. 19.

In a seemingly desperate move, Supervisor Jim Patterson moved to create a subcommittee of supervisors, developers, county staff, and Santa Margarita residents that would develop a scaled-down version of the project and reduce some of the impacts. His motion failed 2-3.

Achadjian, however, voted “Regrettably no.” Asked what was regrettable about his vote, Achadjian said he might have voted differently earlier in the day “before we got so passionately attacked,” but felt there would be lawsuits no matter what he did by the end.

Aside from a few quick questions to county staff, the three-member majority was silent most of the day. Patterson and others noted that there was almost no explanation for the vote.

Filipponi and team offered their own ways of reducing impacts through such concessions as a swimming pool and more land for the town’s cemetery. Residents balked at the “gifts,” particularly because all but the swimming pool were already part of an earlier development agreement.

Planning commissioners previously denied the project, but the decision was appealed to the Board of Supervisors and underwent four appeal hearings. Patterson estimated that the appeal had cost county taxpayers between $35,000 and $40,000. The first special (adjourned) hearing alone, he added, cost between $4,000 and $6,000.

As the supervisors packed up their things, one of the audience members blew a duck whistle in commemoration of the lame-duck vote.