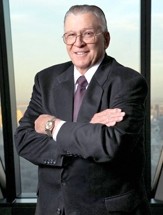 George Hearst, Jr., chairman of Hearst Corp. and grandson of newspaper icon William Randolph Hearst, failed in a recent bid to seal from public view court documents related to his quest to become conservator of the estate of his twin sister Phoebe Hearst Cooke.

Attorneys for Hearst argued on March 26 for a motion to close all hearings from public view and seal the court file in the case. Judge Teresa Estrada-Mullaney denied the motion.

The motion concerned the ongoing fight between Hearst and Cooke of Shell Beach. Her inherited wealth has been estimated at as much as $2 billion, although Forbes magazine recently estimated her estate’s value at $1.4 billion. That figure would still make her one of the world’s richest women. Hearst’s fortune is estimated to be the same.

Cooke’s privacy rights, Hearst’s attorneys argued, should trump the public’s right to court information because details of Cooke’s personal and financial life could prejudice public opinion and expose her to ridicule.

Estrada-Mullaney’s order denying the motion was not available as of press time.

Family members led by Hearst and including Cooke’s daughter have argued the 81-year-old woman is irrational and paranoid and has fallen victim to con artists who have bilked her out of millions of dollars and taken valuables from her estate. They also say she was not receiving appropriate medical care.

As the fight between siblings plays out, San Luis Obispo County  has stepped in to take temporary conservatorship of her estate. In the weeks since, for example, the conservator has taken over the running of her Circle Six Ranch in Paso Robles. Among the spending her relatives point to as evidence of irrationality were $1.9 million paid to a car dealer to handle Cooke’s finances and $500,000 given to someone for breast enhancement surgery. In all, her attorneys allege some 26 individuals “took advantage” of her in ways that drained $20 million from her estate.