Libertine Pub Brewer/Owner Tyler Clark approached our Monday morning interview in much the same way he approaches brewing his fiercely-beloved sour beers: With a free-flowing game plan, a lot of laughing, and a dash of blind confidence.

He knows: You’ve got to pour out a few tanks to make good beer. Plus, no one likes a stuffy interview. 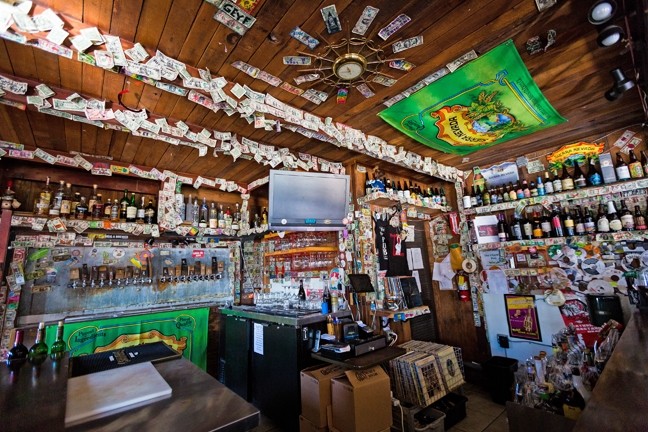 No guts, no glory, right?

The moment I rolled into the Morro Bay brewery/restaurant/live music venue, I knew—without a doubt—that there would be guts flying everywhere. Finally, an interview that would be blissfully devoid of the word “artisanal.”

“We only listen to vinyl records here,” Clark said, solidifying an instant camaraderie between us (get $1 off your beer if you bring in a record to play!). I prayed that my digital recorder would stand up against The Misfits’ melodic distortion.

Luckily for you, dear reader, it did.

Let the record state: While Clark and his team poured massive bags of malty goodness into a bubbling vat at 10 a.m., the guys danced and sang along to both sides of at least three different records ranging from reggae to punk rock to funk.

The surreal experience was enough to put this road-weary reporter—not to mention New Times photographer Kaori Funahashi—into a really good mood. Plumes of sweet-smelling malt dust filled the air as the gang traded their favorite lines from It’s Always Sunny in Philadelphia. Pulling down our dust masks to take joyful swigs of Libertine’s new, ultra-sessionable Framboise table beer (perfect for spring sipping), Funahashi and I couldn’t help but giggle like seniors ditching Spanish class. “Authenticity is important to us. We always strive to make beer that we like, and we want to stay true to what we do well,” Clark said. “Regardless of what anyone thought, this is what I knew I was going to do.”

That authenticity goes for the “Surfing Jesus” above the front bar as well as the way Clark brews his beers—fearlessly. I can see why Clark is a genuinely happy guy. He’s making beer with his friends, his own way. 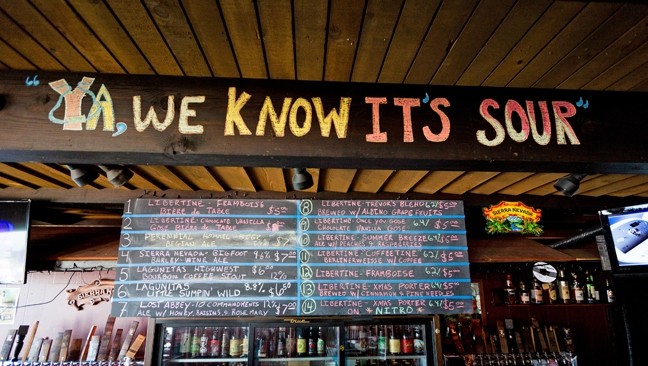 Plus, the location ain’t bad.

Formerly a waterfront restaurant, the two-story “Pee-wee’s Playhouse” of a building boasts a front bar with street access to the Embarcadero, 10-barrel brewhouse, basement storage area, kitchen, upstairs hideout, and a second bar/dining area with a ridiculous view of Morro Rock.

It’s the kind of view normally reserved for the blue-haired, white table cloth set. Clark is 30 and probably still gets carded at the liquor store. Although young, the Santa Ynez native has spent a dozen years working his way up through the Central Coast beer industry.

As I toured Libertine’s kitchen, I realized just how serious the brewer is about creating true “wild” ales.

Volcanic chunks of earth sourced from Morro Rock itself sizzled on the commercial kitchen’s stove burners, waiting to be dumped into the latest mash.

Clark, who boasts a few burns from this process, explained that he likes to play with practices dating back hundreds—even thousands—of years.

“[The rocks] give the beer a unique flavor, and we don’t pitch any yeast in any of our beers either—it’s all naturally occurring,” Clark said. “In the last 100 years or so, brewers have really tried to control their yeast strains. We really want to get away from that completely.” 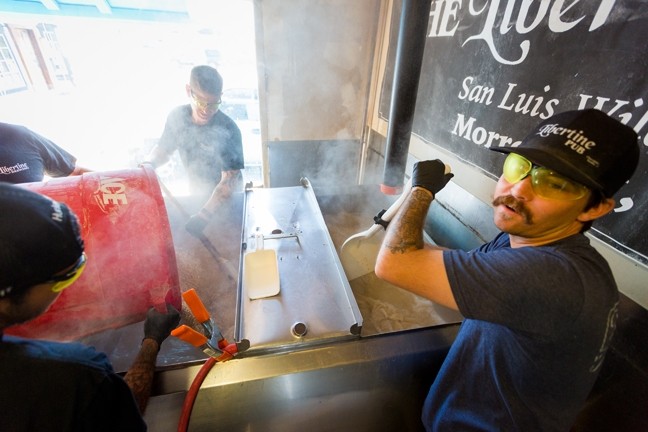 But is it local? I can already hear the chorus of farmers market fanatics that live inside my head. The answer is, yes—but only when it enhances the end product.

Although Clark puts a high premium on supporting local purveyors—sourcing pomegranate juice from an old farmer in Paso Robles or kiwis from Nipomo—he is not “precious” about the task.

“I don’t believe in using ‘all local’ for the sake of being all local,” Clark said. “You could use all local and it could still taste like crap. My main focus is, ‘How is the beer going to taste?’”

That being said, Clark has probably created The Most Local Morro Bay Beer of All Time, Period. His Morro Rock Saison not only features wild yeast and the aforementioned cooled lava sourced from Morro Rock, but also hops grown in the parking lot, near an ironically wacky “surf board and waves” photo op.

Of course, the brew is punched up with a dash of salty Morro Bay sea water.

“People ask, ‘What does San Luis Obispo taste like?’ Well, this is it,” Clark said.

For the record, this may be the most “artisanal” thing I’ve ever heard.

Already a fan of Libertine’s expansive, ever-evolving lineup of sours? Here’s a surprising fun fact for you. Clark technically brews only about three beers: a golden, an ale, and a porter. The dramatic variation in flavors is the direct result of open fermentation, employing wild yeast (the integral factor in creating a sour beer), and a highly creative aging and blending process.

“Everything goes into tanks, then into oak barrels to ferment for three months to three years,” Clark said, adding that barrels range from former sauvignon blanc and whiskey barrels to second-use Firestone Walker vessels. When he can get his mitts on it, French oak imparts a killer, aromatic finish.

“From there, the blending happens,” Clark said. “We are brewers, but I really like to call myself a blender. By using a bit of this barrel and a bit of that—and using a mix of beers that have been aged for different periods of time—our flavors are always able to change and evolve.”

The result—acidic, zesty beer ranging from pucker-worthy-sour to lusciously fruity or playfully tangy—is truly a standout. The brewery boasts 48 rotating handles of craft beer from around the world, so sour-phobes can work up their courage before diving in head-first. A quote scrawled above the dining room bar reminds these new sour sippers: “Ya. We know it’s sour.”

“Your brain is designed to think bitter and sour are poisonous; you really have to start mild and work your way up,” Larrabee said. “I find that sours have an incredible capacity to cut the fat from food, and the carbonation is a real palate-cleanser.”

After experiencing Eureka’s bacon-laden fig marmalade burger paired with Libertine’s Figster Wild Ale (what happens when a coy “hipster” reference collides with old mission figs, orange zest, and barrel aging in both Ascendant Spirits Breaker Bourbon Barrels and French Oak Chardonnay barrels) I began to really “get” why every local craft brewery seems to be unrolling a new sour offering.

As Larrabee so eloquently put it: “After a day at a beer festival filled with IPAs, a sour is the perfect reset button. It’s all you want in that moment.”

“We know how to brew IPAs and lagers, but everyone makes IPAs and lagers,” Clark said. “It’s more fun to see what we can naturally bring to the area and offer up something completely unique to this environment.”

With the help of Libertine, many Central Coast drinkers are discovering that tart truth for the first time. Currently, the brewery is working to expand to a new, 9,000-sqaure-foot brewery and restaurant on the corner of Broad and Pacific streets in downtown San Luis Obispo. Opening is projected for late summer or early fall 2015.

“Being on the water, with the environment around us and using open fermentation—it makes the beer what it is,” Clark said. “When we start brewing in San Luis Obispo, we may have an entirely different product, but that’s really exciting. We’re not trying to make the same beers over and over.”

If you ask me, “Libertine,” which refers to a freethinking person who rejects accepted opinions, is the perfect name this daring dude.

“No one can re-create what we are making,” Clark said. “We can’t necessarily re-create everything we do. And we like it that way.”