It’s daytime, and Food Guy and Mrs. Food Guy have finally allowed me in the cab of the car instead of throwing me in the back of the truck with those filthy animals. Fine Corinthian leather? Looks delicious.

We soon pull along an unfamiliar road, and Food Guy wrestles a Super Dog costume over my noble head. Mmm. I look good in a blue shirt and red cape. I could get used to this. 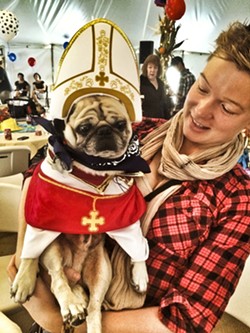 So many things to pee on as we hike along the sidewalk. To slow the humans down, I decide to drop a deuce. I still don’t understand why they’re so fastidious about saving my deposits. Humans are strange, but they have food, so I tolerate my captivity.

What is this magic? We’ve come upon an enchanted land populated by nothing but fellow pugs. First I meet Lucy, a robust young female replete in a custom-made cowgirl outfit created by Lucy’s owner, Cyndi Connolly, who’s nowhere to be seen. A man in a hat tells Food Guy all about Lucy and then says, “Lucy, sit!” She does, the fool!

“See, Lucy?” I glare at her. “You’ve set a dangerous precedent.”

Soon Food Guy and Mrs. Food Guy drag me into a tent filled with fantastic food smells. They get glasses of the yeasty substance they’re so fond of drinking and soon we meet Karl the Pope, whose miter is quite regal but who seems to have lost his crosier.

I begin to worry that my simple blue pullover and red cape are insufficient, until I meet Doug, who’s nude save for a collar. Doug is round like a potbellied pig, and fast. I chase him through the tent, around the tables, inside and out, my nose pressed against his bunghole. Oh, Doug, your dreamy musk is overpowering. I never see Doug’s face because after much time chasing him, Food Guy unceremoniously grabs and leashes me at the same time Doug’s food guy grabs him.

Food Guy and Mrs. Food Guy are now in line, piling one delicious smell after another onto their plates. It must be time for third breakfast. Soon, they’re seated at a table, shoveling food into their mouths, while I sit forgotten under the table, ignored, neglected, and practically starving.

Finally, after I’ve smelled them eating tri-tip, linguiça, a baked potato with all the fixings, blanched broccoli with cheese sauce, Western style beans, coleslaw, and jalapeño cornbread, Food Guy feeds me small bits of tri-tip. Will this humiliation never end? Just give me the whole damn piece!

Soon we’re on the way out, making our way through the tent and by a quartet of Pugs in Mexican folkloric adornment. Diamond, Lilly, Darla, and Bella … so many butts to smell, so little time. But Doug, Doug! I’ll never forget you, Doug the Pug!