Tickets to the gun show

For the first time ever, the fair in Paso Robles will host the California Mid-State Fair Strongest Man and Woman Competition on July 30 starting at 1 p.m. at the headliner stage. Entrance to the competition is free with paid fair admission. For more information on the event visit midstatefair.com. Local gyms in the SLO Strong family include The Iron Jungle, The Lab, Crossfit Ergo, Atascadero Crossfit, Clarky's Body Shop, Headstrong Fit, and Estrada's Gym. Visit slostrong.com for more information.

A few years after college, he weighed more than he ever had, topping out at 280 pounds. Cal Poly alumnus Andrew Wickham knew something had to change. 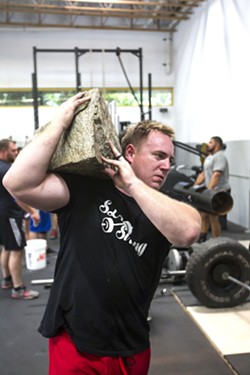 "I got into triathlon and Spartan Races to lose weight, but I was never going to win a marathon or win a triathlon," Wickham said. "I realized I was really strong so I tried a powerlifting competition and then a strongman competition."

About four years later, his weight was about the same, but his body fat was lower than it had been in years. In March of this year, Wickham's hard work on his physique paid off when he earned the pretty formidable title of California's Strongest Man from a hard-fought competition in Huntington Beach.

But about a year ago, Wickham got tired of always having to travel far and wide to compete and not having a strength sports community here in San Luis Obispo County. After meeting fellow lover-of-lifting-heavy-things Dennis Chaples while working out at the Iron Jungle in Paso Robles ("Oh, you're lifting something heavy? We should be friends," Wickham said of their meeting) the two came up with an idea. What if they started a free group built around strength training activities with no tie to any one gym in the area? At their first workout in the spring of 2016, just eight people showed up. Now the group boasts about 30 core members, and last year in August they won the best team award at a National Academy of Strength and Power competition in Bakersfield. And this July 30, they'll bring back a little of that circus-freak feel to the fair with impressive feats of strength to the first ever California Mid-State Fair Strongest Man & Woman Competition, just a few months after the group hosted its first powerlifting meet in May.

"The look you see on people's faces when they do something they couldn't imagine doing ... it's a little more fun than your average gym workout," Wickham said. 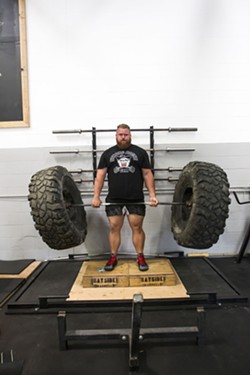 Eminem's "Lose Yourself" blasts through the speakers at the newly opened Headstrong Fit on Ricardo Court in SLO on a sunny June Saturday. About 20 or so people rocking Nikes and Converse are here to work out and prep for the upcoming competition at the fair. They are also celebrating the latest gym to join the SLO Strong circuit with a barbecue. SLO Strong members reside everywhere from Santa Maria to Paso Robles, but once a month they meet up at a different gym to sweat it out.

This isn't your average gym session with weight machines or a pair of dumbbells, though. People are pushing enormous tires affixed to barbells and giant rocks over their heads like it's nothing. While the group held its first powerlifting meet in May, the event at the fair will be a strongman competition. To the layperson, lifting heavy things is lifting heavy things, but powerlifting is quite different from strongman. Powerlifting includes your basic barbell and weights with the deadlift, bench press, and squat up for consideration. Strongman is more of a spectacle.

"Powerlifting is a very straightforward, almost Olympic-style sport that is purely based on your one-rep maximum lift for the three basic lifts," Wickham said. "Strongman is ... there's no specified equipment. It's literally moving heavy things, lifting heavy things, and carrying heavy things."

While the structure is a little more loosey-goosey for strongman, it generally consists of five events, which are up to the meet organizer to decide. At the fair, 40 competitors will do a log clean and press overhead, a giant tire deadlift, an arm-over-arm mega truck and beer wagon pull, a Hercules hold (yup, just like in the Disney movie where Hercules holds the two pillars up), and the atlas stone series, where participants lift massive boulders and place them on a raised platform. While Wickham admits that the circus-like nature of strongman is fitting for the fair, they're not just putting on a show. The competition is also a qualifier for November's Strongman Corporation National Championship in Las Vegas. 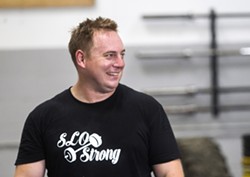 Chelsea Borneman, 29, of Atascadero found her way to SLO Strong through a fitness journey that started in 2013. When a close friend got into bodybuilding, Borneman decided to give it a shot, too.

"It really opened my eyes to it, but it's a very hard lifestyle to maintain," Borneman said of bodybuilding. "I wanted something more realistic."

The super simplified version of what's different between bodybuilding and things like powerlifting and strongman is that body builders are more concerned with aesthetics, which can mean lifting lighter, more reps, and a heavily restricted diet. People in the world of powerlifting and strongman are more concerned with function and lifting things that are as heavy as possible with fewer reps.

Borneman is currently training to compete at the fair, and in April she placed fifth in her division for the California's Strongest Woman competition in Santa Cruz. Titles aside, Borneman loves the feeling of self-sufficiency she gets as a woman who can lift heavy things like a fridge, big screen TV, or that 50-pound bag of dog food at Costco all on her own.

"We're the minority [in the sport], but it's so empowering to feel just as strong as the guy standing next to you," Borneman said.

Back to the Central Coast's iron roots

While powerlifting and strongman may seem like the latest new fitness fad to hit SLO County, in reality, lifting ridiculously heavy things for sport goes way back on the Central Coast. 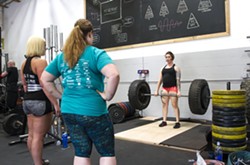 In 1966, Gene Estrada, owner of Estrada's Gym, held his first powerlifting competition in the area at Mission College Preparatory High School. The event later moved to the Vets Hall, and at its peak in the '80s drew in about 120 competitors—some from as far away as Chicago.

Stepping into Estrada's Gym on Pismo Street in SLO is almost like stepping into another era, with the carpet, wood-paneled walls, simple selection of weights, and printed photos and newspaper articles of meets from the '80s and '90s up on the walls.

"The history is motivating," said Wickham, who works out at Estrada's from time to time. "It's classic and old school."

Estrada is now 82 and continues to run the place. Hell, he even lifts still, but won't get into specifics about how much.

"I just try and get by, nothing excessive," Estrada said. "I'm still pretty strong." 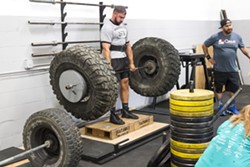 As a full-time engineer for the state department of transportation and a gym owner, Estrada didn't compete much himself, but back in the day he could squat around 600 pounds. He got his own start in the sport when he was 17 with a little inspiration from the father of bodybuilding.

"I'd seen an article in a book by Joe Weider and I sent for a set of weights from him," Estrada said.

While he insisted that everyone who came to compete was a big deal in the powerlifting world, Estrada eventually mentioned a few specific names, like local Alan Best, who once attempted to squat 1,000 pounds at one of Estrada's meets. In 2009, Best took second place for benching 644 pounds at the World Powerlifting Federation World Championship in Las Vegas. And then there was Pat Casey, known as the "king of powerlifters," who was the first man in the sport to ever bench press 600 pounds. Estrada said he always wore a blue robe to the meets in SLO.

But in 2000, Estrada hosted his last powerlifting competition. There simply weren't enough people to help do all the work to keep it going year after year.

"I guess people just got tired of it," Estrada said. "It's a lot of work."

While Estrada's Gym has nearly 60 years of history in SLO and there's a resurgence of competitive strength sports in the area through groups like SLO Strong, the fate of the place where many local lifters got their start remains uncertain. The building where Estrada's is located recently went under new ownership. While Estrada has yet to speak with the new owners, he said he was doubtful that they wanted to renew his lease, which has 4 1/2 years left on it. Estrada also said he won't sell his lease, so there's still time to figure out the next steps. 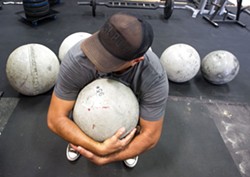 "I've put too much time in this place," he said.

Ideally, Estrada said when his lease is up, he'll turn the gym and equipment over to a younger strength-training aficionado who can hopefully find a new space to put it all.

"Estrada's Gym will definitely live on," Wickham said. "Can't let it end with the building being bought."

As for Wickham and SLO Strong, he wants to keep on making people's lives better by helping them get stronger.

"Depending on what your goals are, there's a place for it," Wickham said. "I want people to go to our meets and say that was the most fun, and I want them to go home and tell their friends so even more people will come." Δ