Sometimes all you need is a name on a flier to have a band. Just ask Joyce Manor, a band conceived of in the back seat of a car parked at Disneyland in 2008. In press materials, co-founders Barry Johnson (guitar, vocals) and Chase Knobbe (guitar) explained that they were sharing a bottle of cheap booze when they thought it’d be awesome to have a “power violence” band where every member had a glam name in the vein of “Johnny Thunders,” and Johnson took the moniker Joyce Manor after an apartment he frequently walked by. 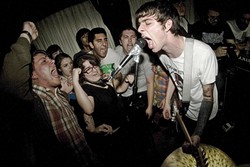 When longtime friend Andrew Jackson Jihad asked Johnson if his old band wanted to open for their LA show, Johnson agreed: “I was like, ‘We have a new band!’ ‘What’s it called?’ And the first thing I thought of was … ‘Uh, Joyce Manor!’ We didn’t even have a band. But they put it on the flier.”

That first opening gig, they performed as a duo, but they soon discovered they were a “pop-punk band trapped inside a folk-punk duo—too many songs just demanded bass and drums. Playing loud is just more fun,” Johnson explained.

By the end of 2009, they’d added drummer Kurt Walcher and welcomed old friend Matt Ebert back from Portland to play bass.

The lineup now set, they “attacked their songs with new enthusiasm and neurotic precision, discovering their own kind of beauty in simplicity and pursuing heartbroken punk perfection.”

They describe their sound as “the speed and sense of melody of fellow South Bay band the Descendents, the artfully bittersweet lyricism of Jawbreaker, and the undeniable heart-on-sleeve honesty of the first two Weezer albums.”

See Joyce Manor and opening act Tijuana Panthers when they play a Numbskull and Good Medicine show this Thursday, April 6 (7 p.m.; all ages; $18 at Boo Boo’s or ticketfly.com or $20 at the door), at the Fremont Theater.

Numbskull and Good Medicine also host The Everly Brothers Experience presented by The Bird Dogs on Sunday, April 9, in the Fremont Theater (6:30 p.m.; all ages; $25 to $40 reserved at ticketfly.com). The Zmed brothers, Dylan and Zachary, re-create the youthful Everly Brothers sound as they bridge the gap between country and rock on classics such as “All I Have to Do is Dream,” “Be Bop a Lula,” “Claudette,” “Let It Be Me,” and “Bye Bye Love.”

SLOfolks has two amazing shows cooked up for you this weekend when they bring Nina Gerber and Chris Webster (on Friday and Saturday) plus the Pam and Jeri show with Pam Delgado and Jeri Jones of Blame Sally (on Saturday)! That’s a lot of potent female-centric talent let loose on stage!

“Seldom do we have the opportunity to bring such a breathtaking collaboration of musical talent to our stage,” SLOfolks President David Arndt said. “Our Friday show features Nina and Chris, two absolute masters of what can best be described as acoustic folk-rock. Nina likely needs no introduction—she’s built a reputation playing guitar with and for a host of folk luminaries too long to list. Chris is an award-winning soul singer (and lead singer for Sacramento’s Mumbo Gumbo) who stretches the genre to cover folk, gospel, blues, bluegrass, and more. Together these two just released a new album—Apple Blossom Lane—that is quite awesome.

“Our Saturday show brings in Nina and Chris joined with the exceptional Pam and Jeri, creating a show they call dueling duos!” Arndt added. “Pam and Jeri likely need no introduction: They have played locally as The Pam and Jeri Show and are integral members of the fantastic Blame Sally. Together, the two duos trade off playing lead and have a marvelous back-and-forth repartee that will be priceless! You won’t want to miss this show!” 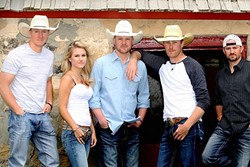 American roots and blues act Orphan Jon & The Abandoned play Frog and Peach this Thursday, April 6 (10 p.m.; 21-and-older; free). Get a dose of authentic, dirty, raw blues played by guys who know how to do it!

Toro Creek Event Center at The Last Stage West presents Native American frontman Cody Blackbird and his band, with special guest Kenny Lee Lewis (the Steve Miller Band) sitting in on a few tunes, this Friday, April 7 (6 p.m.; all ages; $15 presale at 792-0505 or $20 at the door). “Blending the old with the new, Cody merges the Native American flute with powerful vocals into contemporary blues rock sounds with The Cody Blackbird Band,” according to press materials.

Cal Poly Student Opera Theatre presents Gilbert and Sullivan’s The Pirates of Penzance on Friday and Saturday, April 7 and 8, in the Spanos Theatre (7:30 p.m.; all ages; $14 general admission or $9 for students at 756-4849). “The operetta is a sublime and hilarious marriage of clever verse and beautiful music,” CPSOT’s founder and Cal Poly music faculty member Jacalyn Kreitzer said. “It’s a farce filled with puerile policemen, ludicrous lovers, pathetic pirates, and an eccentric major general.”

The Cal Poly Music Department will present an Open House Recital this Saturday, April 8, in Room 218 of the Davidson Music Center (No. 45) on campus (2 p.m.; all ages; free). Expect performances by a clarinet and strings quintet, a clarinet trio, a woodwind quintet, a saxophone quartet, and a brass quintet and percussion ensemble.

There may be a few tickets left for the Clark Center’s presentation of Jim Curry: A Tribute to the Music of John Denver this Saturday, April 8 (8 p.m.; all ages; $39 to $45 at 489-9444). Curry, whose voice was heard in the CBS-TV movie Take Me Home: The John Denver Story, has performed Denver’s music in sold-out shows throughout the country.

The San Luis Obispo Blues Society presents the Dennis Jones Band on Saturday, April 8, at the SLO Vets Hall (8 p.m.; 21-and-older; $25 at the door). Expect high-energy blues and ripping guitar solos as Jones delivers smooth as silk soul vocals! Guy Budd and the Gypsy Souls with Inga Swearingen will open the show. “Blues music is my therapy,” Jones said in press materials. “Writing songs has been a way of helping me understand and deal with life, love, and loss.” 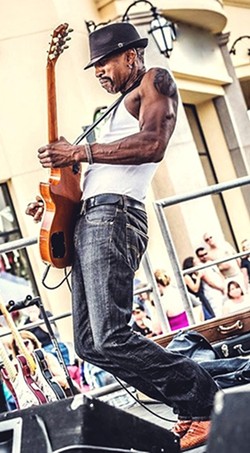 Up and coming band Up! Way Up! brings its blend of ’60s-inspired rock, ska, and reggae to the Frog and Peach this Tuesday, April 11 (10 p.m.; 21-and-older; free). The Bogeys open. “We’re an aspiring rock trio comprised of three Cal Poly seniors and have been playing lots around the area, most recently at Tap It Brewery, the UU Plaza at Poly, and Mongo’s Saloon in Grover,” band member Ryan Corvese said. “We incorporate all three of us into the vocal mix.” Check them out on Tuesday or catch them on Friday, April 14, in Morro Bay’s newest club, The Siren. 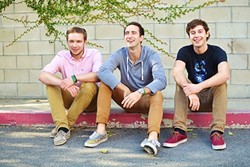 Rebel Souljahz brings their soulful reggae and harmony vocals to SLO Brew on Wednesday, April 12 (10 p.m.; 18-and-older; $17 at ticketweb.com). Hailing from the urban streets of Waipahu, Hawaii, they formed in 2006 and have toured 18 countries and performed before crowd as large as 15,000-plus!

The Central Coast Guitar Show returns on Saturday, April 8, in the SLO Guild Hall (10 a.m. to 2 p.m.; all ages; $5 admission, $1 off if you walk in with an instrument to sell or trade). The point of the event is to buy, sell, trade, and see all things guitar—new, used, and vintage—as well as other musical instruments and services. Plenty of manufacturers, vendors, and musicians will be on hand. The door prize is an Epiphone Les Paul Junior guitar! Email centralcoastguitarshow@charter.net for more info.