The Devil Makes Three has become a staple around here, at first a hard-to-categorize trio that played the old SLO Brew location, delivering a mix of ragtime, roots blues, jazz, and folk wrapped in a punk ethos.

That band’s sound struck a nerve with local audiences, and soon they had to play two nights in a row at SLO Brew to accommodate demand, and then they eventually moved to a bigger venue—the Alex Madonna Expo Center. Many years later, they return this Friday, May 26 (6 p.m.; all ages; $25 presale at ticketfly.com), for another Numbskull and Good Medicine Presents show.

Their newest record, Redemption & Ruin, is filled with covers of the material that inspired chief songwriter Bernhard’s originals. When I spoke to him for their last SLO Town show, shortly before the new album was released, he explained that he wanted people to hear the music he loves. The title refers to the two kinds of songs on the album—gospel songs about getting right with the Lord (redemption) and songs about doing wrong (ruin).

Bernhard, along with upright bassist Lucia Turino and guitarist Cooper McBean, puts on a great show and generally brings along a backing musician like a fiddler. Last time around they also had percussion, something they’d always eschewed in the past. I’m not sure what’s in store for us this Friday, I just know it’ll be good.

I just hope that the Madonna Expo Center has made their beverage service more efficient. Last time around it was near impossible to get a drink. I shudder to think about how much more money the venue could have made.

Good Medicine Presents has also scheduled another free, Live on the Rocks concert at The Cliffs in Shell Beach for Memorial Day, Monday, May 29 (1 to 5 p.m.; all ages; free), with The Cheeseballs and opening act the Arnie Newman Band featuring Francelle.

Headliner The Cheeseballs is fronted by Eric Cotton, who for many years fronted the local reggae act Rock Steady Posse. The San Francisco-based act plays high-energy dance music from ’60s Motown to ’80s New Wave to rock classics. It’s going to be a party overlooking the Pacific!

Sorry, but no outside food and beverages for this family-friendly event. 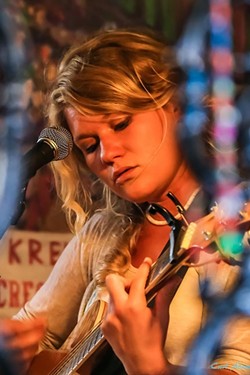 The Arroyo Grande Strawberry Festival is massive! Now in its 34th year, this Memorial Day weekend event held Saturday and Sunday, May 27 and 28, in and around Arroyo Grande Village, features three carnival areas, camel rids, hundreds of craft and display booths, food vendors (lots of strawberries, natch!), and tons of entertainment … and it’s free to attend! Sunset magazine called the festival “the place to be on Memorial Weekend!”

There is also classic rock from the Different Strings Duo, the soulful Azure Tres, and smooth sounds of vocalist Jim Conroy.

Ballooney the Clown will be around as well as the Unicycling Unicorn JameyMossengren and renowned jugglers Brent Fiasco and Alex Clark, plus a whole lot more.

Go for The Rides!

Hailed as the “party that kicks off the summer,” the 24th annual Avila Beach Blues Festival returns to the Avila Beach Golf Resort this Sunday, May 28 (1 p.m.; all ages; $55 general admission; $75 to $110 advanced reserve, available at all Vallitix locations including Boo Boo Records, or online at valitix.com, or by calling (888) 825-5484). 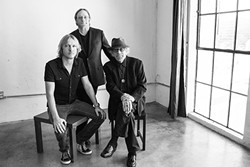 This long running festival has brought the biggest names in blues to the area for almost a quarter of a century, and this year’s lineup boasts another great selection starting with opener Booker T. Jones of Booker T. and the MGs fame, which is known for amazing instrumental R&B songs such as “Green Onions” and “Hip Hug-Her.”

Robert Randolph & the Family Band is another great funk and soul outfit driven by Randolph’s pedal steel guitar. This dude’s amazing! He gets crazy tones and monstrously bent notes out of his instrument, and his backing band is tighter than a hipster’s pants.

JJ Grey & Mofro will bring their swampy Southern and blues rock to the beach. Grey’s got a crazy-good raspy and raw voice, and his band sounds like a houseboat gliding through the everglades with a party going on.

The real treat, however, is headlining act and all-out super group The Rides, which features guitarists Steven Stills and Kenny Wayne Shepherd as well as keyboardist Barry Goldberg.

Stills has called The Rides “the blues band of my dreams.”

Between his iconic voice, Shepherd’s wicked guitar skills, and Goldberg’s stylish keyboard fills, they’re one of the acts that’s better than the sum of their parts. With their in-the-pocket originals to the select covers they play (“Rockin’ in the Free World,” anyone?), this is a not-to-miss experience!

As always, the Blues Fest is brought to you by Otter Productions Inc., which also teamed up this week with Ineffable Live to bring you Jurassic 5 at the Fremont Theater this Friday, May 26 (8 p.m.; all ages; $35 tickets at eventbrite.com). This alt-hip-hop act formed in 1993 and took a different hip-hop path in a similar vein to Kool Keith and Black Star. They were known for their harmony vocals thanks to four talented emcees. Get your hip-hop nostalgia on!

One for the kids

I vividly remember the first time I saw “Peter and the Wolf,” which was my first memory of classic instrumentation. This Tuesday, May 30, the San Luis Obispo County Office of Education, Vina Robles Amphitheatre, and Opera San Luis Obispo (OperaSLO) have teamed up to present “Peter and the Wolf: Telling Stories Through Music!” at the Vina Robles Amphitheatre (11 a.m.; al ages; free!).

“This is a free production for children, schools, and families and brings together Ballet Theatre San Luis Obispo, radio talk show host Dave Congalton, and the OperaSLO Grand Orchestra conducted by Artistic Director Brian Asher Alhadeff in a new ballet version of ‘Peter and the Wolf’—Sergie Prokofiev’s classical tale for narrator and orchestra,” organizers explained in press materials.

“Live theater is a team sport and the performing arts are relevant and necessary for children to experience frequently,” Maestro Alhadeff added. “It’s not since Mozart was alone in a park that we’ve had so much talent concentrated in one place. In the spirit of creating collaboration, innovation, civic goodwill, and support of many generous donors, we are thrilled to bring an impactful, educational, and magical experience to North County.”

RSVP right away to get your free tickets. For more information, contact Valerie Kraskey at 782-7291 or vkraskey@slocoe.org. 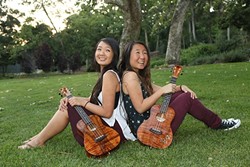 On Saturday, May 27, at Tap It Brewing Co., dig the sounds of Steppin’ Out and Burning James and the Funky Flames “on one stage for one night of hip-hopping, funkity funk, and soul music,” according to the band. Tickets for the 7 p.m. funk and soul show are $17 in advance at brownpapertickets.com or $25 at the door.

Hoapili Productions presents the ukulele artistry of The Lee Sisters on Saturday, May 27 (7 p.m.; all ages; $18 ticket info at 878-6793 or santamariahula.org), in the San Luis Obispo Museum of Art. Lise and Emi Lee, from Rancho Cucamonga, are self-taught and have been playing together for five years. 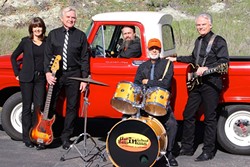 Unfinished Business Productions presents their Unfinished Business Memorial Day Jam, benefiting Disabled Veterans on Monday, May 29, at the Avila Beach Golf Resort (1:30 p.m.; all ages; $15 presale at Boo Boo Records and brownpapertickets.com or $20 at the door). Enjoy the ’60s rock of Unfinished Business, funk and soul of Burning James and the Funky Flames, the Ray Charles influenced sound of singer Roy Henry, R&B and funk favs Steppin’ Out, and the classic rock trio The Mooks, in a fundraiser for veterans organizations such as Operation Comfort, Amazing Surf Adventures, and QL Plus.

An evening of mantra, song, and chant await when Deva Premal, Miten, and Manose perform at the Clark Center on Tuesday, May 30 (7:30 p.m.; all ages; $35 to $85 at 489-9444). According to organizers, “These powerful gatherings offer a joyful path to centering in these turbulent times, creating moments of what Deva describes as ‘ecstatic silence,’ or in Miten’s words, ‘luminous pools of deep celebration.’” 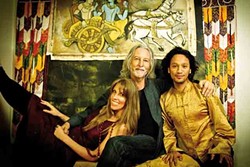 If you haven’t bought your Live Oak Music Festival tickets yet, time’s a-wasting! Good Medicine Presents proprietors’ Todd and Korie Newman joined the KCBX staff in booking talent for this year’s festival, and the lineup is packed with talent!

This is an awesome, family-friendly festival with music going all day, plenty of jamming opportunities for musicians, a kids activity area, concerts aimed at teens, and more!

Visit liveoakfest.org for a complete listing of shows and activities as well as to purchase tickets! Remember, this is a fundraiser for your public radio station KBCX 90.1FM!