Strings hanging down from above do not a Japanese puppet make. It’s more intricate than that, more detailed, more nuanced.

Each doll is controlled by three puppeteers, who move around on stage behind a waist-high screen with their nearly life-sized charge. They work together to articulate life into the lifeless in Ningyo Johruri Bunraku puppet theater performances, which are rare to see—even in Japan. 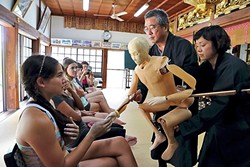 So, it would be extremely rare to catch Japanese puppet masters practicing their craft in the U.S., which is why it’s pretty special that the San Luis Obispo Museum of Art (SLOMA) is collaborating with the SLO Little Theatre to host two such shows on Wednesday, Nov. 2. World-renowned Japanese Bunraku puppeteer Kanroku and the Mokugu-sha Company are performing in various Bay Area locations this fall, making a special stop in SLO, thanks to the Sonoma Cultural Exchange and SLOMA board member Libbie Argan.

Maki Aizawa, founder of the exchange, said she works to bring masters from Japan to do workshops and share their artwork in the United States, but this is the first performance troupe she’s been able to bring over. Through hands-on experiences, the Cultural Exchange hopes to inspire people to learn about traditional practices and understand other cultures.

“We have beautiful Japanese traditions, but how do we preserve those in modern society,” she said of her mission.

Bunraku is the least common of the three traditional performance arts practiced in Japan—Kabuki, highly-stylized dramatic storytelling, and Nô, storytelling through song and dance with masked characters, are the other two. Bunraku is a blend of sung narrative, instrumental accompaniment, and puppet drama that emerged during the early Edo period in the 1600s. Plots are related to historical plays set in feudal times and dramas that explore the conflict between the heart and social obligation.

Kanroku worked with the National Bunraku Theater in Osaka for 33 years before branching out on his own, stepping away from the strictly traditional style of Bunraku, and developing a more contemporary performance with collaborators from other art forms. He has been the artistic director of his own company, Mokugu-sha, since 2006. He teaches and directs across Japan and has invested time reviving farm village theaters in remote areas of the country.

“He has more flexibility as an independent company,” Aizawa said. “And I thought that was the perfect way to perform in the United States.”

The puppeteering that will happen in the SLO Little Theatre on Nov. 2 will include classic renditions of stories, adaptations of those classics, and new plays. SLOMA Community Engagement Manager Erica Ellis said the performances should bring audiences the ability to touch puppets and interact with them, giving them a tactile experience.

November marks the first of a series of Japanese art exhibits and events that will pick back up again in March with a kimono and shibori exhibition. To go along with the kimono exhibit will be a weeklong kimono-making class led by Aizawa’s mother, Tsuyo Onodera, who devoted 50 years of her life to the art of kimono making in Japan.

“There are a lot of Japanese people in the community,” Ellis said. “We really sort of want to elevate this understanding of their culture.”