Pushin' the 805: Double digit growth means Firestone Walker's got another expansion in the works

As No. 4 on California’s list of biggest craft breweries, Firestone Walker Brewing Company is officially in the top ranks of recognizable beer makers, sidling up next to Sierra Nevada. Lagunitas. Stone. Anchor Steam.

And all of the breweries have more than sudsy, tasty adult beverages in common. They each have this “good” problem of a growth rate between 20 and 40 percent over the last handful of years. Sierra Nevada is No. 1—No. 3 in the nation—and pumps out a little shy of 1 million barrels a year (one barrel equals two kegs). 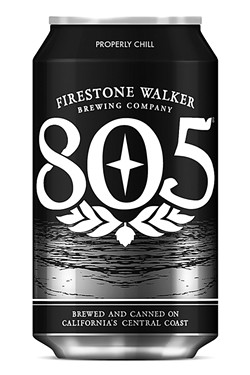 The Chico-based beer maker recently completed a 200-barrel brewhouse, packaging facility, and restaurant in North Carolina to help with demand on the East Coast. Lagunitas of Petaluma finished a Chicago brewery in May (to supply the East Coast) and has plans to build another one in LA. San Diego’s Stone announced plans in 2014 to put one brewery in Virginia and one across the pond in Berlin, Germany. And San Francisco stalwart Anchor Steam is partnering with the San Francisco Giants to build a second brewery in the city near PacBell Stadium.

So, where does that leave Firestone Walker?

With a mini-brewery/restaurant under construction in Venice Beach and a recently announced partnership with Belgian beer producer Duvel Moortgat Brewery to expand again within its Paso Robles footprint, plus the potential to enter the European beer market. Who knew?

Owner David Walker certainly didn’t at the completion of the last expansion in 2013. That was only two years ago, and the Paso brewery is already pushing against the still shiny seams of its relatively new brewhouse, which Walker said was supposed to comfortably get them to 2018.

“We felt we had a few years to come up with a strategy,” he said.

The brewery cooked, cooled, fermented, and packaged an estimated 150,000 barrels of beer for the craft-buzzed world in 2013 and 200,000 barrels in 2014. This year, Walker said, that number will be more like 270,000 barrels. The brewing and fermentation facility has a capacity of about 300,000 barrels a year. So, with that growth rate in mind, the current operations won’t get them through the end of 2016.

Well, it helped, anyway. After three-ish years on the market, it makes up about 50 percent of Firestone’s sales.

“This is the curse of the 805,” he said. “So many people are drinking the beer; we never imagined this many people would be drinking it.”

And the wonder of it is that all the people drinking it are in California. It’s not a beer that Firestone distributes in the 17 other states it sells in.

You want hops? You want bold? You want one-beer-and-your-done alcohol content? This beer’s not for you. Let’s just say 805 isn’t the most complex beer in the world. It’s a sessionable (drinkable) blonde ale that tickles the palate at 4.7 percent alcohol.

So maybe it’s not what you would expect from a hoppy or malty or in-your-face craft beer—of which Firestone has plenty to choose from, by the way (Wookey Jack, anyone?)—but there’s a reason the beer’s on fire.

According to Tom McCormick, executive director of the California Craft Brewers Association, it’s a sign of the craft beer movement really starting to pull over those more mainstream consumers. Think Miller, Budweiser, Coors, and yes, even Pabst Blue Ribbon.

“We’re seeing a lot of crossover,” he said. “Those people may try an IPA or a barrel-aged beer … and they may even enjoy it.”

But a beer like 805 is just easier to drink more of. He said beers like Sam Adams lager and session IPAs are also gaining in popularity. Both have fewer hops and less alcohol than what could be considered more traditional craft beer.

“It’s not surprising. It’s an easy step for people trying to move into craft beer,” he said. “I think we’ll see a continuation of those styles becoming more and more popular.”

McCormick’s excited about the level of growth California craft breweries are experiencing but added that it’s a really hard business to grow in because upgrading brewing equipment; acquiring property to expand a footprint; bigger fermentation tanks; and new bottling, canning, and kegging equipment makes for a huge capital investment.

“It’s just very expensive,” he said. “When you kind of get to that point when you’ve outgrown your brewing system … the next step is a big one.”

They have to plan for the next 10 to 25 years of growth, not just the next two years. But with growth that pushes 20 to 30 percent for a couple of years, it can be hard to plan. It’s more of a best guesstimate of what your business will look like. That’s a growth trend McCormick thinks will eventually level off to something a little more reasonable, something a little easier for local family-owned businesses to keep up with.

Walker is in agreement: “I think everything will calm down a little bit, soon. And we can return to a steady growth.”

Ideally, that growth would look more like 10 to 15 percent a year.

“All the top craft breweries have been growing way too fast,” Walker added. There’s the constant need to upgrade and expand, which means those breweries are constantly borrowing money, adding employees, and changing future plans.

“It keeps you up at night,” he said. “None of us really visualized it.”

In order to stay the pace, Firestone Walker elected to find a bigger, and fitting, partner in Duvel, which will essentially become a shareholder (and investor) of the Paso brewery.

“Some people call it an acquisition,” Walker said. “I call it a marriage.”

People envision Duvel walking in and taking over, which is not what’s going to happen, Walker said. Duvel is a family-owned brewery, which is a large stakeholder/owner of nine other brands (not including Firestone), and understands the way those types of businesses are run. The way Walker explained it: Duvel gives breweries the capital and support they need to continue growing and expanding on the course they’re already on, in the way they’re already doing it.

He gets the sense that a big part of Duvel’s investments are in the interest of preservation.