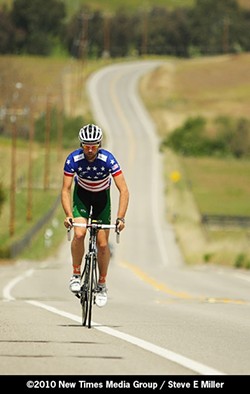 Anton has been racing bicycles for 11 years, and his Division One victory in the USA Cycling Collegiate Road National Championships is his first major win. The race took place near Madison, Wis. on May 7 and took 170 competitors from more than 100 schools through roughly 75 miles of hilly terrain. They climbed 8,000 feet in brutal conditions. Driving rain and 40-degree weather forced many of the smaller riders to drop out; some suffered hypothermia.

“It was pretty miserable, but as a bigger guy, I can handle the cold better than other riders,” said Anton. Ironically, Anton and his teammates expected his size would be a drawback, given the track’s steep climbs. He spent most of the race running interference for them, blocking the wind so they could save energy for sprints.

Though he had fallen behind on every climb, nearing the race’s end his competition was exhausted, and he attacked with eight miles remaining. The final stretch was twice as steep as the Cuesta grade, said Anton, but he was able to catch and barely pass Adam Wisseman of Colorado State University. Their finish was the closest in the history of the track. Another of the Cal Poly wheelmen, Menso
de Jong, finished third.

Anton’s win is especially impressive, coming 11 months after he suffered an onset of ulcerative colitis, an autoimmune disease that attacks the large intestine. He went to the emergency room last year when debilitating cramps kept him from eating, and he couldn’t walk.

“It took the doctors a few weeks to figure out what was wrong with me, and I lost about 40 pounds,” said Anton. “I was eventually able to start riding again, but really slowly at first.”

Anton said he loves cycling for the independence and plans to race professionally. There’s big money at that elite riding level, but Anton intends to first complete his degree program in architecture. He’s currently sponsored by such local businesses as Foothill Cyclery and Affinity Chiropractor and hopes his recent victory will attract the interest of big racing teams and sponsors.

“The win was a huge weight off my shoulders,” said Anton. “This changes my outlook on cycling and opens up a lot of doors.”

Chris Stehula hopes his big win will attract sponsorships and opportunities. Stehula finished first in the USA Triathlon’s National Collegiate Championship on April 17 in Lubbock, Texas. The triathlon consists of a 1.5-kilometer swim, a 10-kilometer bike race, and a 10- kilometer run to the finish. As in Anton’s race, the weather was rough. The swimmers braved 54-degree water and the road courses were flooded, said Stehula.

“I prefer the tougher conditions,” Stehula said. “They seem to affect me less.” 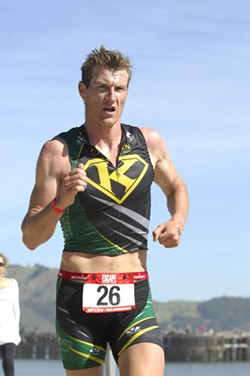 Stehula was the first swimmer out of the water, but lost his lead during the bike race. He was about 40 seconds behind Colorado’s Cedric Wayne at the start of the foot race. Stehula pushed hard and was able to regain the lead after a mile and a half. With four miles left, he kept a steady pace and finished 23 seconds ahead of Wayne. “The hardest part was overcoming my mental demons of doubt. I was sure I had lost it on the bike,” said Stehula. “It turned out to be a pretty epic battle.”

In the months preceding the race, Stehula trained for 30 to 35 hours every week. He said he enjoys being able to get away from the cars and crowds and escape to the open road with a few close friends for training. “I started racing just to stay in shape,” said Stehula, “but now training and working out is kind of who I am.
Being healthy is a way of life.”

Besides competing and his class work as a full-time Recreation, Parks, and Tourism major at Cal Poly, Stehula coaches swimming for Arroyo Grande High School and the Puma Aquatic Team in San Luis Obispo. He said he tries to be a positive example to his student and pushes them to excel. He had to miss one of their swim meets for the triathlon. “They weren’t doing that well, but when I called to tell them about my win, they really turned it around,” he said.

Stehula is sponsored by K Man’s Cycle and Run in Atascadero. Owner Keith Schmidt paid for Stehula to fly to Texas for the race and gave him the bike he rode. “He’s one of those kids with so much energy. He comes off as this arrogant cuss when you first meet him, but he’s so humble,” Schmidt said of Stehula. “His whole life is based on giving back to kids. Very few coaches walk the walk like Chris.”

Since the national win, Stehula’s been preparing for an upcoming trip to Spain for the Collegiate World Championship. ∆

Contact intern Nick Powell via the editor at econnolly@newtimesslo.com