Downstairs in the cellar of his pink Avila Beach home on the hill overlooking a sparkling coastline, Archie McLaren held in his hands a bottle of wine worth at least $10,000. But the man behind the Central Coast Wine Classic has no plans to drink it, now or ever. The 75-year-old stopped drinking alcohol years ago due to a stroke.

"In all honesty, I've had more than I deserve," McLaren said with a slow Southern drawl and a shrug, as his signature beret sat jauntily atop his head.

In 2017, McLaren put on the 32nd and last Central Coast Wine Classic, an event that grew into a week's worth of events, helped support KCBX for years, raised several million dollars for 130 local charities, and put Central Coast wines on par with those in Napa and Sonoma.

"The event became rather broad and rather complex and rather eclectic because a lot of that was who I was," McLaren said.

The Central Coast Wine Classic played a key part in the region's history and evolution of its wine industry. With the event coming to an end last year, Libbie Agran, director of the Wine History Project of San Luis Obispo County, knew she wanted to kick off a series of exhibits about all things wine with McLaren's story. The Doing Good and Living Well: Archie McLaren and the Central Coast Wine Classic exhibit is currently on display at the History Center of SLO County through March. James Papp, curator for the Wine History Project and the exhibit, is also currently working on a book, A Place and a Passion: Archie McLaren and the Central Coast Wine Classic (set to come out sometime in early 2018), about McLaren's life, going back to when the Southern boy from Memphis had yet to have a reckoning with the Ku Klux Klan or develop a taste for fine wine.

"It [the Central Coast Wine Classic] was this extraordinary vehicle for really increasing people's understanding of wine and at the same time bringing people from around the world, leading people in the wine world, and that helped put San Luis Obispo wine on the map amongst the trend leaders," Papp said.

In 1960, at McLaren's prep school in Memphis, his classmates were quoted in the yearbook as saying they wanted to be doctors or lawyers, just like their fathers. McLaren wrote that his ambition was "to be myself." It's a sentiment he's managed to hold on to over the years. 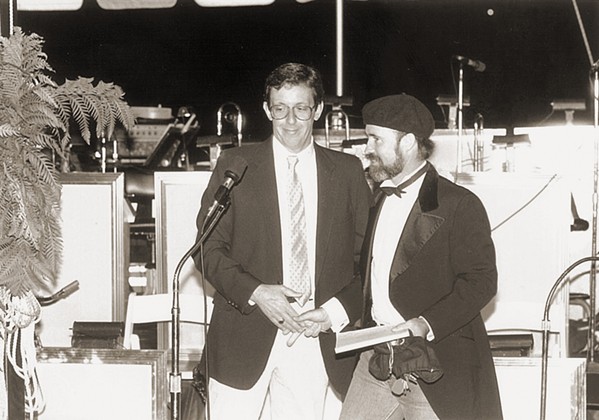 While McLaren was a prep school kid, he was there on scholarship and never really felt like he fit in with that crowd. His family had lost money and slaves generations before during the Civil War and were overtly racist. Meanwhile McLaren was sneaking out of debutante parties to go to blues clubs where he was "the only pink person." Still, he became a National Honor Society member, the state’s number one player in junior men’s tennis, and president of the honor council. College took McLaren to Vanderbilt University on a scholarship, but  a year of partying too hard lost him his scholarship and he ended up finishing school on loans. He later coached tennis at Mississippi State University while going to graduate school for English. As part of the deal, McLaren also got a gig teaching English at a segregated school for African-Americans in Columbus, Mississippi in 1968. While at a faculty get-together at a sister school, which was for white students, McLaren's colleagues told him not to embrace the African-American students he was teaching.

Instead of following his colleagues' advice, McLaren fell in love with a woman named Georgia Mae, who was African-American and Choctaw Indian. Soon after, the athletic director at Mississippi State asked to talk to him.

"He called me into his office and he said, 'I understand you're going to marry a colored girl,'" McLaren recounted. "I said, 'We haven't decided that, but I'm thinking about it.' And he said, 'Well I want you to know that the administration here is giving you 48 hours to live.'"

McLaren knew that meant the Ku Klux Klan was giving him 48 hours to get out of town, since the university's administration was made up of KKK members. Georgia Mae and McLaren married anyway and got safely out of Mississippi through friends in the FBI. They relocated to New Orleans and had a daughter, Leslie Michelle McLaren, but the marriage ultimately didn't last.

"I could see and she could see that no matter where we went in the South, we weren't going to be comfortable, and she was going to be mistreated," McLaren said.

A few key things happened next for McLaren. In the early 1970s in Memphis, McLaren was exposed to the world of European cooking through his lawyer friend Russel Sugarman and his German-born wife, Regina. Stax Record Producer Isaac Hayes and his songwriting partner David Porter introduced him to European wine. 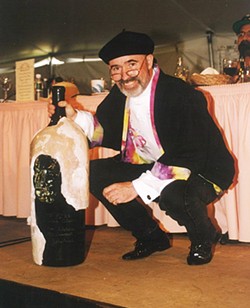 "I felt I had been involved in some kind of personal revelation, and I was incredibly grateful," McLaren said.

Through a friend, McLaren went to work for West Publishing Company, the largest legal publisher in the country in the mid 1970s. His territory included Memphis, western Tennessee, and Arkansas. He ended up taking over California after another rep couldn't deal with the "weird Californians." McLaren's friend, Horace, was living in Los Osos in the 1970s and happened to hold the record for drinking the most screwdrivers at the Old Port Inn in Avila Beach. Horace told McLaren, "You gotta see Avila Beach." So in 1979, McLaren arrived in SLO County and never left.

"I was fascinated by this town, the location of it, the wackiness of it, the beauty of it," McLaren said. At that time, there were just three wineries in the county. The SLO wine region was poised for a boom. "I went west, and I went here at the right time," he said.

There's wine in these here hills

Before the Central Coast Wine Classic ever had its name, before its auction brought in several hundred thousand dollars in a single year for local public radio, and before people paid more than $1,000 a plate for a lavish dinner at Hearst Castle, there was a small wine tasting reception in 1980 at the San Luis Bay Inn for KCBX's new manager, Frank Lanzone.

Lanzone remembers that there were just 12 wineries pouring at the time, and most of them were from Northern California, since SLO County had only a handful of wineries then as opposed to the 250 or so the area now boasts.Everyone was given little brochures with tips like, "white wine should be tasted before red."

"It was kind of a low-key thing," Lanzone said.

McLaren and Lanzone met when KCBX's office and McLaren's were in the same building on Chorro Street. The two developed a friendship and took wine tasting classes together. McLaren suggested the radio station's annual wine tasting should include a wine auction and started helping with the event in 1984. That year, the net profits doubled to $8,000. The following year, McLaren started hosting the show, The Wine Drinker's Guide to Indulgence for KCBX. That same year, in 1985, the event grew to three days and was dubbed the KCBX Wine Classic Auction and Tasting. It was still held at Larry Shupnick's San Luis Bay Inn. Both the hotel owner and McLaren threw in $1,600 each to get things going.

It was a time and place for Central Coast winemakers to come into their own. Jim Clendenen, of Au Bon Climat in Santa Maria, couldn't afford a hotel and spent the night in his truck after the tasting that year.

Gary Eberle—who was working at Estrella River Winery in Paso at the time, years before he would open Eberle Winery—remembers the early days of the classic.

"It was so early in the industry," Eberle said. "I was young and dumb and it was a chance to try a lot of good wines and get some recognition. It was just fun. It started out slow, but it grew, because it was done well." 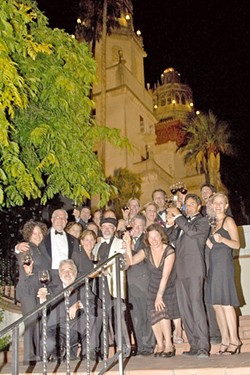 And grow it did. The event turned into an eight-day affair at its peak, with local chefs like Ian McPhee along with celebrity chefs like Emeril Lagasse, Susan Spicer, and Tory McPhail serving up delicacies for more than 200 people at Hearst Castle. McLaren pulled in winemakers from SLO County, Napa, Sonoma, Santa Barbara, Ventura, and even from Europe. His efforts got him inducted into exclusive societies like the Austrian brotherhood of wine. It was important to McLaren to be as inclusive as possible.

"I'm a person who believes that narrowing your focus damages not just the people you're leaving out, but it damages you," McLaren said.

To up the ante of the auction, McLaren had winemakers make special vintages just for the event, with custom artwork and etchings on oversized bottles that held at least an entire case of wine. Each year, members of the food and wine industry were honored and received a custom piece of functional and/or decorative art made by SLO sculptor Crissa Hewitt. Hewitt crafted silver goblets, wooden wine cases, and clocks, too. She even made a silver bowl for Julia Child when the famous chef was honored by the classic in 2002.

At its peak, the event brought in $300,000 for KCBX in 1999, making it the No. 2 charity auction in California. Bev Aho started out as a volunteer and later became McLaren's executive assistant. While many described McLaren as something along the lines of "an odd duck," after first meeting him, they always came around. Aho wasn't surprised by that, or by the magnitude of the classic.

"He has an energy about him," Aho said. "He walks into a room and you want to hear what he has to say. Archie just finds these people. You just follow him." 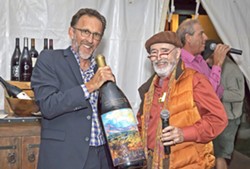 After the terrorist attacks on the Twin Towers in 2001, the country creeped closer and closer to the inevitable recession. People started spending and going out less. In 2003, the classic lost money for the first time since 1985. Around 2004, KCBX officially parted ways with the event, choosing to focus its efforts on the Live Oak Musical Festival.

"It[the Wine Classic] grew into a tiger and we were holding onto the tail, trying not to let go," Lanzone said.

Still, the classic and McLaren carried on, and the event shifted its focus to raising nearly $3 million for more than 130 causes over the next 13 years.

In 2017, the event raised $145,700 for The Fund for Vineyard and Farm Workers, an effort started by local farmer and winemaker Brian Talley and his wife, Johnine, of Talley Vineyards. Talley has watched the event grow alongside the wine industry in SLO County.

Last year, due to declining health, McLaren, stepped away from Central Coast Wine Classic. With no one to fill his shoes, it marked the end of an era for wine on the Central Coast. But it also shows just how far the region has come.

"It really took off," McLaren said. "We couldn't have conceived that there would be hundreds of wineries in Paso Robles. It's fascinating." Δ

Arts Editor Ryah Cooley will have just a drink more at rcooley@newtimesslo.com.