Putting the art in chemtrails

A local artist looks to the sky for a new canvas 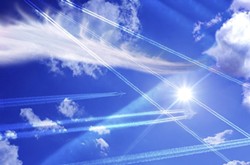 She got the tattoo 12 years ago in Baltimore, she reveals while splashing milk into the coffee mug. It signified the start of a journey, a project that prompted her to travel nearly the entire length of the United States. Her goal is to create pictures in the sky from materials released by planes, a hybrid of skywriting and chemtrails (patterns formed in the sky by chemicals released from planes and jets). A decade ago her project seemed nearly impossible. But after receiving a $75,000 research grant from the Manchester Art and Science Fund, Marx decided to relocate to the Central Coast where temperature and atmospheric conditions are virtually magnets for chemtrails.

Marx first imagined conjuring pictures in the sky as a child. Her mother was a meteorologist for the local television station, and Marx grew up fascinated with clouds. When her mother explained to her that some of the clouds in the sky weren’t really clouds but water vapor trails leftover from passing planes, she began to consider the possibility of creating an image in the sky.

“Imagine a Monet painting hanging in the sky, visible for miles. As we start experimenting with colored smoke and different chemicals it’s entirely within the realm of possibility that we could re-create something of that quality.”

The first step towards achieving this goal involved connecting with people who would understand the science behind it, as well as pilots who might be willing to volunteer their expertise. Unfortunately, science doesn’t feature very heavily in Marx’s background; she has an MFA from the University of Maryland in Baltimore. Originally, her goal was to find an aeronautical consultant, someone who could answer such questions as what types of planes would be best for her project and how she can minimize her fuel costs. But most of her contacts are still in Baltimore, and though she made a point of paying a visit to the San Luis Obispo County Regional Airport, she hasn’t found anyone willing to volunteer their time and expertise as a consultant.

Based on her conversations with pilots in Baltimore, Marx has determined she’s probably going to have to use private jets. Contrails typically form above 26,000 feet, where the air is cooler. Marx points out that, even with something as basic as skywriting, planes have to fly above 10,000 feet, otherwise convection currents will destroy the writing. Chemtrail art is far more complicated, though she is taking a lesson from skywriters who now use satellite navigation software to pre-program their message before taking to the air, minimizing potential mistakes. Because she’ll be working with multiple jets on a single image, each laying down a differently colored trail, she plans to create a grid beforehand, also taking into account atmospheric conditions that might alter the rate and direction the trails will disperse.

Throughout the process, Marx intends to keep the Environmental Protection Agency apprised of her activities to ensure she’s not violating any laws or safety regulations. In her grant application, she pledged to pursue a working method that involved the least-hazardous materials she can find. Though she does acknowledge that her art will have some impact on the Earth.

“But pretty much everything humans do has a negative impact,” she points out. “If you drive a car, you’re having a negative impact. And oil paint is considered a hazardous material. Yes, what I’m doing will probably have a more serious impact than a single painting, but I’m also working on a much larger scale and that should be taken into account.”

Part of the appeal of the Central Coast was its proximity to Vandenberg Air Force Base, which was the site of a 2006 NASA satellite launch. The purpose of the effort, called CALIPSO (Cloud-Aerosol Lidar and Infrared Pathfinder Satellite Observations) was to gather research about how aerosols affect clouds and precipitation, and their findings might assist Marx with her own research. She sent a letter to the National Aeronautics and Space Administration in 2008, laying out her research plans and theories, but hasn’t yet received a response. Marx is concerned the agency’s bias against chemtrails—NASA’s official stance is that they don’t exist, and are a myth perpetuated by conspiracy theorists—will bias them against her project. But she insists that her approach to the sensitive topic is visionary, and positive.

“I’m not one of those people who goes around preaching that the government is laying down trails of chemicals in the sky in order to poison us. I don’t believe that. I don’t really know why chemtrails exist, but as long as they do, I think it’s the responsibility of an artist to take life’s ugliness and sadness and use it to make something beautiful. That’s all I really want to accomplish.”

The artist calls herself, somewhat jokingly, a pioneer, advocating the expansion of artistic horizons. She hasn’t yet decided what her first sky painting will be, though she’s thinking about re-creating a work by a famous abstract artist, citing the genre as a little easier to replicate, at least until she has a better understanding of her materials.

Arts Editor Ashley Schwellenbach is not afraid of no ghost. Send ghost packs to aschwellenbach@newtimesslo.com.