What do you do when your income stream comes to a grinding halt, but you have all kinds of time on your hands? Well, if you're a musician, you do what musicians do all the time—proverbial woodshedding, which in the case of New Times Music Award winner Dante Marsh and The Vibe Setters was already in the works. They've been preparing their video entry for NPR's 2020 Tiny Desk Concert, which you can view on YouTube. 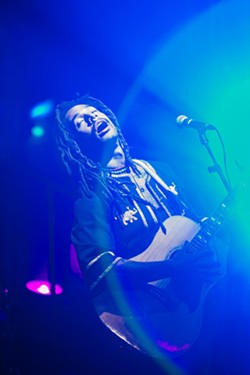 The video for their song "Above Me" is pretty simple—the four band members are set up in a sunroom with green hills and the ocean in the background, and they're playing the song live. It's pretty amazing, and it'd be so cool to see a local band get exposure from NPR's excellent series.

"We finished and released the video for NPR's Tiny Desk," executive producer Ryan Orr explained, "and now we're planning on going into the studio with Dante and the band in the coming weeks and we're really excited about the future of this band."

"I had to cancel all concerts through May and am hoping summertime isn't completely out of the question, too," he added. "We will be ready to jump back in quick once the dust settles, that's for sure!"

I'm with ya! Can't wait until live shows are safe to proceed again!

"Since Record Store Day has been postponed, we're pushing up our record release date to Wednesday, April 1, in hopes of providing some at-home entertainment for people during the quarantine situation," Joe Schwab of SLO Town alt-rockers Four Day Beard said. 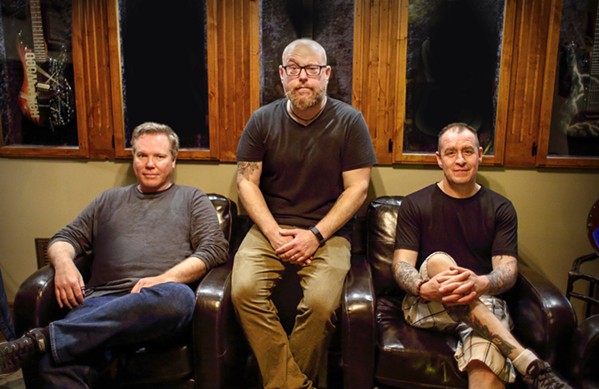 Somnium is a follow-up to their debut self-titled album "with digital distribution on major streaming platforms as well as CD and a limited pressing on vinyl," Schwab explained.

A snazzy blue vinyl, you can preorder it on their website, fourdaybeard.com!

They'd planned to release the album and do a live in-store performance at Boo Boo Records on Saturday, June 20, for Record Store Day, but instead they decided to speed the music into your locked-down lives, describing the album as "a nocturnal dreamscape of overdriven swirling guitars juxtaposed with soft, sweet, and sometimes smoky deep vocals."

A few singles are available to check out online, and they're hooky little nuggets! They describe their first single, "Chasing Birds," as "a brooding requiem of connection, love, and mortality." It's got some great harmony vocals.

"Somnium represents a new chapter for us in many ways," the band said in press materials. "While it isn't a complete departure from our last album, the sound has definitely evolved, covering new sonic territory. Our new lineup is solid, and we've settled in nicely as a three piece."

"I want to share what's going on in my world as a musician and technician," Tyson Leonard of EDM act Tropo emailed me. "Things started falling apart two weeks ago and by last Thursday, March 12, my whole world was canceled: several festivals, two tours, and a music cruise.

"I immediately began to brainstorm on what to do and how to adapt," he continued. "Nothing was coming to me at first, so I began to get my music gear and studio space organized. I set up my studio in a way that made it obvious I wasn't going anywhere for a while. Right away I was inspired to write music."

Songs Leonard had started but abandoned immediately "came to life," he said. The violinist, who first found acclaim in the local band Rain Fur Rent, connected with other musicians "to get the ball rolling on remote collaborations." Now he hopes to have a new album—all recorded remotely with other musicians—ready to release by the end of April. I'll keep you informed!

"Another opportunity that came to mind is live-stream performance," Leonard said. "I've been seeing several friends give this a shot and successfully fill their virtual Vimeo tip jar! I'm very excited that I too am about to launch my own virtual concert series."

He's also been mastering other musicians' recordings at his home studio, so if you're a musician in need of such services, connect through his Facebook page—facebook.com/tropo.musik—where he'll also be offering a live-stream performance on Saturday, March 28, at 7:30 p.m. If you're digging the sound, Leonard's virtual tip jar can be found at venmo.com under tropo_musica and paypal.me/tropo.

"In conclusion," Leonard said, "I'm broke, but happy. I am hopeful for our future. Stay safe y'all."

Every six months or so, avid surfer, yoga practitioner, and singer-songwriter Christopher Hawley rolls up to Paso Robles from his Venice Beach home to host the Folk-n-Soak Music Festival at Franklin Hot Springs. It's three days of camping, music, yoga, and soaking in the natural 100-degree hot spring.

Hawley says he's "still hoping for the Spring Soak," but for now he's been "digging into unfinished songs."

"So far I've finished about five that just needed a little more time and attention," Hawley explained. "I've done two Facebook Live broadcasts, and I've gotten back into running since the yoga studios I go to are closed."

He plans to do another live set on Instagram this Friday, March 27, at 3 p.m., available at instragram.com/christopherhawleyrollers/.

I recommend you draw a bath, take a soak, and listen to this Hawley roller! Stay safe, everybody! We'll get through this! Δ